A major exhibition inspired by the ways artists approach the news and respond to the stories and images that command the headlines. The Last Newspaper includes a selection of important art works from 1967 to the present, in which twenty-seven artists explore their own reactions to the news, the mechanics of its dispersal, or both. Paintings, works on paper, and performance pieces by artists like Judith Bernstein, Andrea Bowers, Sarah Charlesworth, Thomas Hirschhorn, Luciano Fabro, Hans Haacke, Emily Jacir, Mike Kelley, and Wolfgang Tillmans... 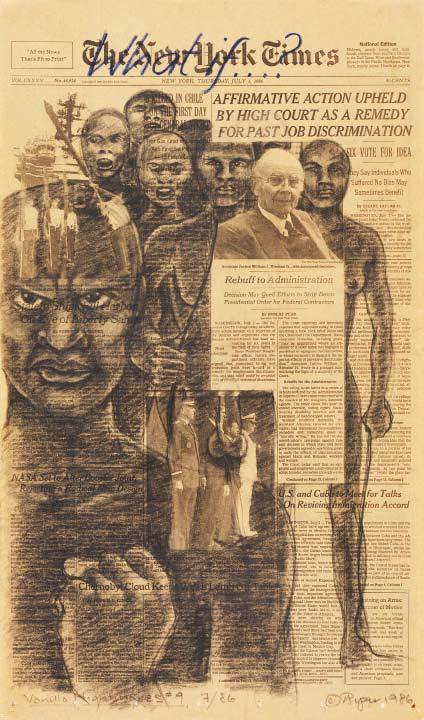 The New Museum will present “The Last Newspaper,” a major exhibition inspired by the ways artists approach the news and respond to the stories and images that command the headlines. The exhibition will animate the Museum with signature artworks and a constant flow of information-gathering and processing undertaken by organizations and artist groups that have been invited to inhabit offices within the museum’s galleries. Partner organizations will use on-site offices to present their research, engage in rapid prototyping, and stage public dialogues, opening up the galleries as spaces of intellectual production as well as display. For visitors, “The Last Newspaper” will be a unique site of dialogue, participation, and critical thinking, posing new possibilities for a contemporary art museum experience. The exhibition is co-curated by Richard Flood, Chief Curator of the New Museum, and Benjamin Godsill, Curatorial Associate.

The partner organizations that will form the active “departments” of “The Last Newspaper” exhibition include: the Center for Urban Pedagogy; StoryCorps; Latitudes; The Slought Foundation; INABA, Columbia University’s C-Lab; Joseph Grima and Kazys Varnlis/Netlab; and Angel Nevarez and Valerie Tevere. These partners will weave their topics together in on-site offices and a discussion space that will host scheduled programs such as talks and informal conversations between participants, museum visitors, and featured guests such as The New York Times Feminist Reading Groups, a project by Liz Linden and Jen Kennedy dedicated to examining that day’s issue of the newspaper.

A weekly newspaper compiled by partner organization Latitudes (Max Andrews and Mariana Canepa Luna) will report on the events and discussions that take place throughout the galleries during the run of the exhibition. This publication will be distributed, free of charge, to New Museum visitors and will serve as a record of the exhibition’s proceedings in lieu of a traditional catalogue. A second weekly publication, to be called “A Temporary Newspaper,” will evolve from a series of discussions, debates, interviews, and research into the epochal shifts occurring in the global information industry today. The “Temporary Newspaper” team (led by Joseph Grima and Kazys Varnelis/Netlab: Networked Architecture Lab at the Columbia Graduate School of Architecture) will engage in the entire publication process, from conception to editorial discussions and design, in full view of the public.

“The Last Newspaper” will also include a selection of important art works from 1967 to the present, in which twenty-seven artists explore their own reactions to the news, the mechanics of its dispersal, or both. Paintings, works on paper, and performance pieces by artists like Judith Bernstein, Andrea Bowers, Sarah Charlesworth, Thomas Hirschhorn, Luciano Fabro, Hans Haacke, Emily Jacir, Mike Kelley, and Wolfgang Tillmans, all disassemble and re-contextualize elements of the newspaper in an effort to take charge of, and remake, the transmission of information that defines our daily lives. Using methods of collage, mimicry, and repurposing, these works deconstruct the newspaper and address the ambiguity about what is “news”.

The earliest work in “The Last Newspaper” exhibition is Luciano Fabro’s Pavement Tautology (1967), which is based on the traditional method of cleaning terrazzo, or tile floors, wherein the previous day’s newspapers are used to dry a freshly mopped floor. The most recent work in the show will be a series of paintings by Nate Lowman which he will create and install every week, working from a newspaper story and/or image that has compelled his attention. William Pope.L will supervise a performative restaging of his seminal work Eating the Wall Street Journal (2000) enlisting a team of collaborators to occasionally wander throughout the museum eating the financial daily. A suite of twenty works by Dash Snow, Untitled (2006), follows the downfall of Saddam Hussein as captured on the front pages of New York City tabloids, while Sarah Charlesworth’s Movie-Television-News-History (1979) addresses the coverage of an American newscaster’s on-camera murder by the troops of Anatasio Somoza at a check-point in Nicaragua. Featuring this arresting image as it appeared (often framed by a television window) on the front page of 27 U.S. newspapers, Charlesworth’s work shows the newspapers’ emerging dependency on electronic news formats, but also its import as a temporary but tangible record of events.

In many ways the exhibition is an exercise in citizen journalism whereby the constant re-ordering and annotation of information in both the artwork and the processes of the resident participants becomes an arena for the structuring and restructuring of truths.

Center For Urban Pedagogy
Founded in 1997, Brooklyn-based CUP is a nonprofit organization that uses art, design, and visual culture to improve public participation in urban planning and community design, particularly among historically underrepresented communities. For this exhibition, CUP will present work from the Envisioning Development Toolkits program. Created in partnership with designers and community organizations throughout New York City, the toolkits are interactive teaching tools that demystify complex topics about land use and development. Organizers use them to reach their constituents and build their own advocacy campaigns around such topics as affordable housing and zoning. In this exhibit, CUP's toolkits will be on view, and CUP staff will conduct workshops with the completed Affordable Housing Toolkit, as well as field test hands-on activities from the forthcoming Zoning Toolkit.

StoryCorps
Brooklyn-based StoryCorps gathers the life stories of Americans by having close friends and family members interview each other in specially designed recording stations placed across the country. Since 2003, StoryCorps has collected and archived more than 30,000 interviews from more than 60,000 participants. StoryCorps Conversations are preserved at the American Folklife Center and at the Library of Congress, and shared through weekly broadcasts on NPR’s Morning Edition. For this exhibition, StoryCorps will use the New Museum’s visitor experience to research and rapidly prototype new ways to make their hundreds of thousands of hours of recorded information more readily available to the public.

Slought Foundation
This Philadelphia-based experimental organization, founded in 2002 by Aaron Levy, engages the public in dialogue about cultural and socio-political change through collaborations with cultural producers, communities, universities, and governments. For this exhibition, Slought will animate the entire New Museum with discursive displays about their Perpetual Peace Project, which explores Immanuel Kant's essay on the idea of "peace" with social theorists and political practitioners. Media stations in the interstitial spaces of the museum will accompany a shared community "arena" in the fourth-floor gallery intended for public programming, and a reading room "retreat" between the third- and fourth-floor galleries. For this exhibition, Slought and its partner institutions, including the European Union National Institutes of Culture and United Nations University, have collaborated with architect and designer Ken Saylor, as well as filmmakers Laura Hanna, Alexandra Lerman, and Project Projects.

Latitudes
Latitudes, a Barcelona-based curatorial office founded in 2005, will act as instigators and connectors between the various artworks, departments, and other participants of “The Last Newspaper.” They will conceive, report, write, edit, design, and print a weekly newspaper “THE LAST POST / THE LAST GAZETTE / THE LAST REGISTER...” cataloguing the events and discussions that will take place in the gallery spaces during the duration of the exhibition. This free newspaper will be distributed to museum visitors, and a collected volume of all of the issues will serve as a record of the exhibition’s proceedings.

Joseph Grima and Kazys Varnelis/Netlab
Joseph Grima is the current editorial director of Domus magazine and the former director of the Storefront for Art and Architecture in New York. Kazys Varnelis the director of the Networked Architecture Lab at the Columbia Graduate School of Architecture, Planning and Preservation. Along with an expanded network of collaborators, Grima and Varnelis will create The New City Reader: A Newspaper of Public Space in a performance-based editorial residency at the New Museum. This residency will transform a portion of the exhibition space into a forum for discussion as well as an editorial office. Grima, Varnelis, and their collaborators will publish a weekly publication that will be distributed in the galleries and will also be posted on walls around Manhattan allowing for open public reading.

Angel Nevarez and Valerie Tevere
A Dutiful Scrivener looks at the framework of the obituaries section of The New York Times. Through an interview with Bill McDonald, NY Times Obituaries Editor, A Dutiful Scrivener takes viewers through the journalistic criteria of posthumous representation, writing style, judgment, newsworthiness, and the obituary to be written. We see this as an alter-mausoleum where the logging of one’s achievements and failures is transformed into a process of questioning. How might we critically reflect upon this form of writing, its limitations and word count, in order to sum up a life?

Jeffrey Inaba/C-Lab
New York-based architect Jeffrey Inaba will be working in collaboration with C-Lab, a think tank he directs at Columbia University’s Graduate School of Architecture, Planning and Preservation which studies urbanism and architecture and makes policy recommendations, to animate the galleries by examining the role of weather in the news. The focus will be on weather as the single element in newscasts that is simultaneously predicative, interactive (with other stories at the top of the hour news broadcasts), and regularly featured on the front page of newspapers.

Jacob Fabricius/Old News
Jacob Fabricius, director of the Kunsthalle Malmo in Sweden, will continue his five-year-old practice of inviting artists to create newspapers that are themselves compilations of newspaper articles and advertisements gathered over time. Fabricius will present past examples of “Old News” as well as a new issue, commissioned by the New Museum for this exhibition.