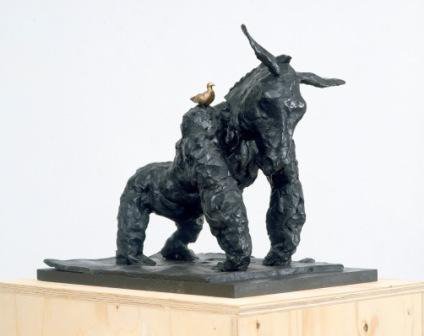 This exhibition of drawings and sculptures by Angus Fairhurst draws together key works from throughout his career and is the first gallery exhibition since the artist's death in 2008. The show is curated and installed by artists Urs Fischer and Rebecca Warren. Part of their concept was to invite various friends of Fairhurst to build plinths for his bronze sculptures, which will both serve as individual tributes to the artist and re-contextualize his sculptures to enliven their posthumous display.

The drawings selected for this show range from small-scale vignettes (such as a graphite study of a banana springing out of its skin) to expansive sequences of disembodied, gyrating pairs of limbs. Collectively they indicate Fairhurst's enduring innovation and ranging interests, whether in nature, the romantic pastoral genre, or cycles of regeneration and decay.

By turns cartoonish and diagrammatic, Fairhurst's drawings epitomise his offbeat and melancholy-tinged humour, his experiments with figuration, and his use of gorillas as figures of pathetic buffoonery and otherworldliness. In one work we encounter two gorillas hoisting enormous fish under their arms in front of an amber-hued sunset. This incongruous and oddly poignant coupling of ape, man's nearest animal relative, and fish, his primordial ancestor, expresses both opposition and symbiosis, and both a beginning and an end. Here and throughout Fairhurst's art, origin and outcome sit side-by-side.

From around the turn of the millennium, Fairhurst began making sombre bronze successors to his anthropomorphic drawings, their pitted and textured surfaces bearing witness to his process of clay modelling. The bronzes in the show include a series of maquettes of gorillas in absurdist guises (several of which have large-scale counterparts) - flattened into a rug in A Couple of Differences between Thinking and Feeling (Flattened) (2001), or gazing into a mirror in The Birth of Consistency (2004). Untitled (With Bird) (2007) surreally transposes a donkey's head onto the body of a gorilla, producing a characteristically tragicomic spectre. The piece revisits an early drawing of a gorilla with an ass's head, alluding perhaps to the buffoonish figure of Bottom in A Midsummer Night's Dream. Lessons in Darkness (2008) depicts a tree and man melding copulatively into the same matter, expressing notions of cyclical regeneration and an entropic return to origins.

From 2009-10, Angus Fairhurst's work has been exhibited in a touring retrospective at Arnolfini, Bristol, Waddesdon Manor, Buckinghamshire, and M Museum, Leuven, Belgium. Angus Fairhurst graduated from Goldsmiths College in London in 1989. Following Freeze (1988), he exhibited in most of the landmark group exhibitions of his generation, including Gambler (1991) at Building One, London, Brilliant at the Walker Art Centre in Minneapolis (1995), Some Went Mad, Some Ran Away at the Serpentine (1994), Apocalypse at the Royal Academy (2000), Casino 2001 at SMAK and In-a-Gadda-da-Vida, with Sarah Lucas and Damien Hirst, at Tate Britain (2004). Legendary performances by Fairhurst's band, originally called Low Expectations, took place at an international range of venues from 1995-2001.