Visual arts and dance from the last 50 years 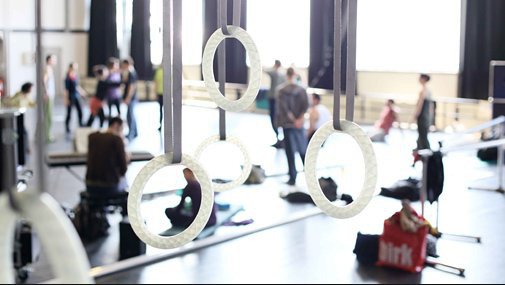 Move: Choreographing You invites you to become a participant – or even a dancer – in installations and sculptures by internationally renowned visual artists and choreographers. The exhibition explores the historical and current relationship between visual arts and dance by presenting seminal works and new commissions by leading artists from the last 50 years.

Performances are woven into an exhibition of sculptural works, set pieces and installations, which can be activated by the public and by a group of resident performers in the gallery. Explore actions in a new way: pick up a hula hoop on the outdoor sculpture terrace, watch impromptu performances and go for a spin in the digital archive.

As part of Move, some of the world’s most famous choreographers and dancers appear in one-off performances during October and November at Queen Elizabeth Hall and Purcell Room. Three days of discussions, encounters, performances, dance shows, workshops and participatory events also take place in November, featuring world renowned artists and choreographers and members of the public.

Performances in the gallery:

One of Trisha Brown's most iconic early works, Floor of the Forest (1970) comes to the UK for the first time.

Dancers from Candoco Dance Company and Trinity Laban students animate the installation to coincide with Trisha Brown Dance Company's Repertory Evening. In Floor of the Forest, performers dress and undress their way through a free-standing sculpture threaded with clothing. A normally vertical activity is performed horizontally and reshaped by the pull of gravity. The performance forms part of Move: Choreographing You at the Hayward Gallery.

Dance Umbrella celebrates this iconic artist in an enticing evening of work spanning four decades. With her loose-limbed, swinging style of movement, Trisha Brown creates fluid, silken works which both delight and challenge audiences. First seen in 1983, Brown's brilliant and highly acclaimed Glacial Decoy (1979) is set against Robert Rauschenberg's iconic projections of classic Americana. A work of visual impact and tension, You can see us (1995) is an intriguing duet developed from Brown's acclaimed solo, If you couldn't see me (1994). Opal Loop / Cloud Installation #72503 (1980) is a recently revived classic for a quartet enshrouded in fog. Brown's latest work, L'Amour au théâtre (2009), is accompanied by sections of Rameau's opera Hippolyte et Aricie. Set against a backdrop of Brown's own artwork, this delightful piece embodies her signature movement alongside elegant couplings and constantly shifting aerial architecture.

The immaculate beauty of Trisha Brown's dances is one of the artistic wonders of our time. (Washington Post)

Enhance your experience of Trisha Brown's work with this unique opportunity to view a range of the choreographer's work on films from the last 40 years.

Fascinating footage, some of which features the original casts, offers audiences another viewpoint illuminating the depth and history of this seminal choreographer's work. Shot Backstage filmed by Brown from the theatre wings, gives an unusual glimpse of her Company's performance of For MG: The Movie. Archive footage of Early Works sees the early casts of many renowned artists - Douglas Dunn, Steve Paxton and Sarah Rudner. Brown herself dances in some of her iconic works including Watermotor and Jonathan Demme's film of Accumulation With Talking Plus Watermotor. Burt Barr's Aeros on Brown's work, Astral Convertible completes the programme.

During Celebrating Trisha Brown, dancers from Trinity Laban Conservatoire of Music and Dance will recreate Trisha Brown’s Drift along the Thames between Southbank Centre and Tate Modern. In Drift (1974) performers advance at a medium pace while moving a fraction of an inch to the right with each step, causing the image to drift slowly right and then left. Passers-by can stop to watch the piece or accompany the performers along their journey.

Thomas Lehmen [ 09 November 2010 - 20:00 ]
Schrottplatz
Is the world really how you see it? With Thomas Lehmen's new piece, a solo entitled Schrottplatz ('scrapyard' in English), a seemingly absurd set-up questions what we think we know. Lehmen performs using various objects which he uses to share his understanding of the world (or lack of). This performance playfully questions our perceptions of the world and also of the theatre.

The Intelligence of Movement [ 26 November ]
Discussion
The mysteries of how we experience the world through our bodies is explored in this discussion between cognitive scientists David Kirsch and Scott de Lahunta, and choreographer Simone Forti.

La Ribot [ Friday 26 November 2010 - 14:00 ]
Llamame Mariachi
Come and explore an unusual world where gravity disappears, theatre is no longer what we know and art forms implode joyfully into one another.

Tino Sehgal's Dance Workshop [ 26 November - 27 November ]
Tino Sehgal leads a two-day dance workshop in relation to Move: Choreographing You. Everybody is welcome to take part. No previous experience necessary.
This free event requires a booking. To reserve a place and receive more information, please send an email to move@southbankcentre.co.uk

Choreography for Blackboards [ 26 November - 27 November ]
Performance
This installation-performance by Michael Klien features six people drawing on blackboards in a ritual ambience. Klien's choreography weaves individual expressions into a dreamlike collective dance of minds. Viewers are free to walk, sit, read and converse throughout the process.

Transforming Time, Making Space [ 27 November 2010 - 14:00 ]
Discussion
The perception of time and space, and notions such as stillness, motion, duration and repetition are central to visual art and dance. How can collaboration between a visual artist and a choreographer change their respective approach to time and space?
Speakers include Alva Noe, Yvonne Rainer, Siobhan Davies and Franz Erhard Walther.

Raise The Roof [ 27 November - 28 November 2010 - 11:30 ]
Performance
This performance choreographed by Nevin Aladag features female dancers individually moving to different songs that cannot be heard by the viewer. The amplified sound of their steps unites their isolated movements. The piece deals with notions of control, liberation, isolation and resistance.

Michael Kliën [ 27 November 2010 - 12:00 ]
Encounters
Michael Kliën, the artistic director of Daghdha Dance Company, talks about his ongoing research into new choreographic methods and procedures and the development of choreography as an autonomous aesthetic discipline.

Mårten Spångberg: Blank Production or No More Autonomy, Part 1 [ 27 - 16:00 / 28 November - 13:00 ]
Encounter
In this talk in two parts, Mårten Spångberg elaborates on his collaboration with Xavier Le Roy for Move Choreographing You. Through meticulous description he will cross out the work in favour of blank production without autonomy. Spångberg's research in choreography in relation to Deleuze and Guattari functions as a background to a series of conceptual excursions within the understanding of choreography as extended practice.

Xavier Le Roy [ 28 November 2010 - 20:00 ]
Low Pieces
Inquisitive French choreographer Xavier Le Roy eludes the usual categories with his iconoclastic body of work which draws on his background as a scientist. His new piece explores the boundaries of the relationship between audience and performer, using a cast that comprises of some of the most creative practitioners in the current dance scene.

Générique [ 28 November 2010 - 12:15 ]
Performance
Générique is a game that uses the format of the post-show artist talk as a setting. The sole rule is that everybody discusses as if a performance had just taken place - as if the performers had performed it and as if the audience had seen it. Both the imaginary as well as the actual performance emerge through discussion.

Choreographic Objects [ 28 November 2010 - 18:00 ]
Discussion
This discussion investigates choreography as a fundamental principle of organisation in visual arts and dance. What parallels can be drawn between choreography and sculpture? What are possible forms that choreographic thinking can adopt?
Speakers include William Forsythe, Tino Sehgal, Janine Antoni and Stephanie Rosenthal.

Anne Collod in conversation with Alain Buffard [ 28 November 2010 - 11:00 ]
Dialogues
Anne Collod discusses her process of re-interpretation of Anna Halprin's pioneering work of postmodern dance with dancer and choreographer Alain Buffard, one of the performers of Parades and Changes, Replays.

Tania Bruguera [ 28 November 2010 - 15:15 ]
Encounter
Tania Bruguera's performance work pivots around issues of power and control. Rather than performing herself, Bruguera often stages situations where the viewer becomes a performer. She discusses this aspect of her practice, which can be seen as choreographic.

Every Saturday, 12 noon – 4pm: Trio A (by Yvonne Rainer) will be performed in the galleries.

Ongoing encounters, interventions and rehearsals in the galleries, including Production, a project by Xavier le Roy & Mårten Spångberg.

Performances supported by Portland Green Cultural Projects. The participation of the Trinity Laban Conservatoire of Music and Dance dancers has been made possible by The Felix Trust for Art.