My Invisible Friend. The exhibition will feature graphite drawings, slide projections and the artist's first video in seven years. Tom is a blue and white domestic shorthair cat who usually lives a pampered life, while Jerry is a small brown house mouse who always lives in close proximity to him. The primary duties of a medieval knight; various interpretations of why Jews break the glass and others stories. 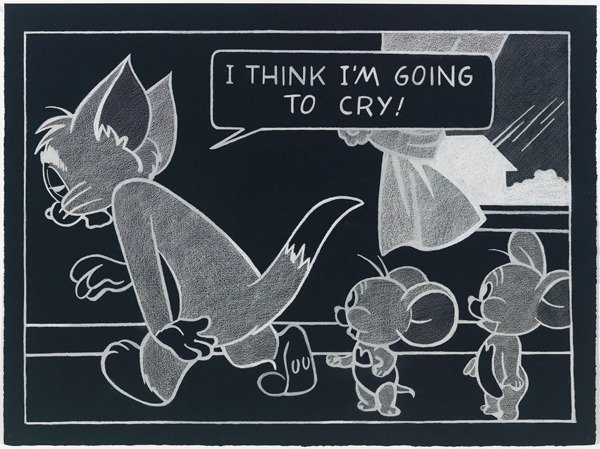 Tony Wight Gallery is pleased to present My Invisible Friend, an exhibition of new work by Karl Haendel. The exhibition will feature graphite drawings, slide projections and the artist’s first video in seven years.

Tom is a blue and white domestic shorthair cat who usually lives a pampered life, while Jerry is a small brown house mouse who always lives in close proximity to him. Jerry possesses surprising strength for his size, lifting items such as anvils with relative ease and withstanding considerable impacts from them. Despite the typical cat-eats-mouse scenario, it is surprisingly quite rare for Tom to actually try to consume Jerry. Regardless of his energy and determination, Tom is no match for Jerry's brains and wits. By the final "fade-out" of each cartoon, Jerry usually emerges triumphant, while Tom is shown as the loser. Both characters display sadistic tendencies and take pleasure in tormenting each other. However, depending on the cartoon, whenever one character appears to be in mortal danger, the other will develop a conscience and save him. Multiple shorts show the two getting along with minimal difficulty, and they are more than capable of working together when the situation calls for it — usually against a third party who manages to torture and humiliate them both.

Knights of the medieval era were asked to "Protect the weak, defenseless, helpless, and fight for the general welfare of all." These were the primary duties of a medieval knight, but they were very hard to accomplish, and rarely could even the best of knights achieve these goals. Knights trained in hunting, fighting, and riding, as well as practicing courteous, honorable behavior, which was considered extremely important. Chivalry was the main principle guiding a knight’s lifestyle, and a way of demonstrating military chivalry was to own expensive, heavy weaponry. Warriors were not only required to own all these belongings to prove their allegiance, they were also expected to act with military courtesy as well. In combat when nobles and knights were taken prisoner, their lives were spared and were often held for ransom in somewhat comfortable surroundings. This same code of conduct did not apply to non-knights (archers, peasants, foot-soldiers, etc.) who were often slaughtered after capture, and who were viewed during battle as mere impediments to knights fighting other knights.

Karl Haendel earned his BA from Brown University in 1998 and his MFA at UCLA in 2003. He has recently had solo exhibitions at The Lever House, NY; Milliken Gallery, Stockholm; Sommer Contemporary Art, Tel Aviv; Harris Lieberman, NY; and Susanne Vielmetter Los Angeles Projects, as well as public projects with the Art Production Fund, NY, and LAX Art, Los Angeles. His work has been featured in a MOCA Focus solo exhibition at the Museum of Contemporary Art, Los Angeles, CA and in the recent group exhibitions Beg Borrow and Steal at the Rubell Family Collection, Miami, Fl; Nothingness and Being at the Fundación/Colección Jumex, Mexico; Haunted, Guggenheim Museum, NY; Picturing the Studio, The School of the Art Institute of Chicago, Chicago, IL, and Lines, Grids, Stains, Words: Minimal Art Drawings from the Collection of The Museum of Modern Art, MOMA, NY. In 2011 Haendel will have solo exhibitions at Galleria Raucci/Santamaria, Naples, and Yvon Lambert, Paris.

For information please call John Henderson at 312.492.7261, or email at john@tonywightgallery.com

A reception will be held at the gallery on Friday, 15 October, from 5–8pm.