The Idea of Africa 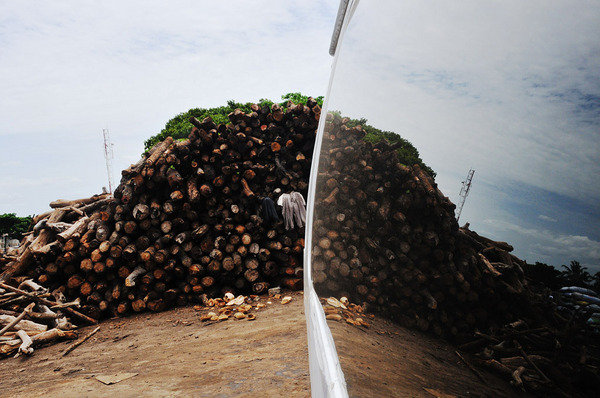 The Idea of Africa is the title of a book by the Congolese philosopher Valentin Yves Mudimbe, published in 1994, which shows how the way we conceive of Africa can still be traced back to the ideology of the Western colonial powers. The exhibition-project at Kunsthalle Bern is initially prompted by the need to critically revisit this "idea" after the celebration of the 50th year of independence for 17 African countries. It will exist of exhibitions, conversations and publications with multiple genealogies and meanings, which sophisticate any extrapolations of "African" identity, or any suggestion of what makes Africa "Africa." Western literature has long portrayed Africa as the antithesis of Europe, or as "a paradigm of difference." For centuries, Europeans have viewed Africa as the screen on which the wildest desires and fantasies were projected and inscribed. In The Idea of Africa, Mudimbe explores the origins and development of this negative conception of Africa. As a whistleblower against ideologies of "otherness", also in an earlier book (The Invention of Africa. Gnosis, Philosophy and the Order of Knowledge) Mudimbe traces this "invention of Africa" back to Western explorations. At the same time he examines how the so-called "other" writes back, by referencing African scholars who have worked within the limits of imposed language and epistemological frames. The exhibition-project at Kunsthalle Bern focuses exactly on those artistic and intellectual endeavours that trace another history, in which the "idea" of Africa is not already a "given" framed by Western assumptions.

The first leg of the project The Idea of Africa (re-invented) unites two artistic undertakings from Nigeria, which seek to capture and elucidate architectural, political and geographical structures by means of photography. The two different ventures share a documentary approach: the artist collective Invisible Borders sought a confrontation with the political borders on the African continent in the context of a kind of self-experiment, and J. D. 'Okhai Ojeikere, over the course of several decades, produced a photographic study on the urban development of the city of Lagos. Consequently, this exhibition represents an inquiry into the approaches and ideas found in very specific examples of contemporary photography from Africa and about Africa, in which the perspective of the author and the viewer, as well as the temporality of the recorded realities function as difficult variables.

Born in 1930 in Ovbiomu-Emai, and now living and working in Lagos, J. D. 'Okhai Ojeikere is a key witness in the processes of decolonisation and transition that Africa and more specifically Nigeria went through. Next to his work that explores the aesthetic form of hairstyles, which has been accorded international acclaim, the artist pursued other significant series of images, over a 60-year period, that have never been shown publicly. As Ojeikere celebrated his 80th year recently, and Nigeria its 50th year of independence, Kunsthalle Bern is proud to show a fragment of his work documenting Lagos' urban modernity, its harbour, its flyover highways and its most significant buildings. The beauty of the series resides in the fact that the photographs document a modernist project in Africa, inspired by ideas of pan-Africanism, the struggle for decolonization and the architectural sediments of the dialectics of this struggle have come to symbolize the relationship among Africa, the West and the world. Most of the photographs taken in the sixties and the seventies of the twentieth century during a determinant period in its shaping between Western intervention or patronage and national cultural resurgence of a newly independent country. That is the inspiration behind a wonderful series of pictures that depict Lagos as a very beautiful city, in opposition to some actual assumptions. At the same time Ojeikere is celebrated in the CCA Lagos with an exhibition focusing on his fashion photography, called Sartorial Moments. In april 2011 a retrospective, J. D. Okhai Ojeikere: Moments of Beauty, curated by Aura Seikkula and Bisi Silva, will start at Kiasma, Museum of Contemporary Art in Helsinki.

In November 2009, a group of ten Nigerian photographers, filmmakers and writers traveled from Lagos to Bamako (Mali) in a rented bus. They were planning to present a documentation of this journey at the Bamako Biennial for African Photography. Globalisation appears to facilitate mobility for Africans, but in the domain of mobility on the continent some problems persist and they are criticised by the Invisible Borders-group in an artistic and performative way. Travelling to Bamako, the group connected to CCA went on the move by road within Africa in order to avoid airliner logic, which is still often organised along former colonial hubs (like Paris for example), and at the same time affirm the supposedly implemented Borderless Region Protocol by ECOWAS in 1990. At the same time their trip was motivated by a desire to experience the 'invisible borders', border with no basis in geography, unnatural borders that were arbitrarily created at some drawing board, borders that cannot be seen from a plane. The reality of border crossings – humiliations, bureaucracy, corruption and crime – can only be experienced if one attempts to cross part of the continent by land. Mere months after this project, the Invisible Borders-team undertook a second journey, this time from Lagos to Dakar. Their destination was the Dak'Art 2010, the Dakar Biennial for contemporary African art. At Kunsthalle Bern, their exhibition features photographic, filmic and textual works from this year's project.

The exhibition also features Lagos Wide & Close, the "interactive journey into an exploding city" by Rem Koolhaas & Bregtje van der Haak. This DVD represents a unique engagement with Lagos, capturing multiple perspectives of a volatile moment in its evolution.

On the 22nd of October at 5 pm, Philippe Pirotte will host a public talk at Kunsthalle Bern with J. D. 'Okhai Ojeikere, Amaize Ojeikere, Chidinma Nnorom, Chinedu Alujuchukwu Obi, and others about how to 're-invent' the image of Africa.

The exhibition is the result of the participation in On Independence and the Ambivalence of Promise a workshop organised earlier this year by Bisi Silva and the Centre for Contemporary Art in Lagos.