The 37th edition of FIAC, held at the Grand Palais, the Cour Carree du Louvre and the Jardin des Tuileries, brings together 194 galleries of modern and contemporary art, coming from 24 countries. For the fifth year running, FIAC presents a programme of outdoor works in the Jardin des Tuileries with 20 projects - installations, sculptures, or sound works - in interaction with the public. Also, this year FIAC consolidates its programme of performances with projects by William Kentridge and Francois Sarhan, Aurelien Froment, Dora Garcia. 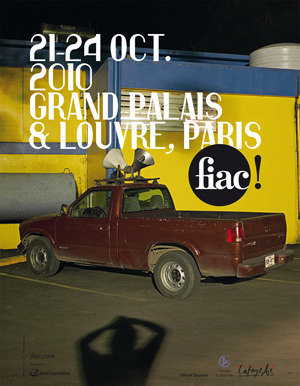 The 37th edition of FIAC will be held from 21st to 24th October 2010 at the Grand Palais, the Cour Carrée du Louvre and the Jardin des Tuileries, outstanding sites that are emblematic of Paris, imbued with its history and cultural life. Because of the high standards it sets and constantly renews and the synergies it has developed with the major Parisian institutions, FIAC occupies a position as one of the not-to-be-missed international events relating to artistic creativity.

Devised in a spirit of continuity, FIAC confirms the founding principles of its identity: its generalist vocation that leads it to offer a balanced panorama of modern art, contemporary art and up-and-coming creativity; its openness to the diversity of artistic practices, as evidenced by the outdoor projects in the Jardin des Tuileries, its programme of performances, or indeed the initial showing this year of a cycle of artists’ films; and lastly its concern for constantly reinforced quality and artistic selectivity.

At the Grand Palais

For his first participation in FIAC Peter Kilchmann (Zurich) will present new projects by Andro Wekua and Francis Alÿs, while Micheline Szwajcer (Antwerp) will show new works by Ann Veronica Janssens and Konrad Dedobbeleer. Michael Craig-Martin will carry out a specific project for the stand of Claudine Papillon (Paris).

Further highlights will be the presentation of outstanding works by George Grosz, Ernst-Ludwig Kirchner and Max Beckman at Henze & Ketterer (Wichtrach (Berne), Riehen (Basel)), Hanne Darboven at Klosterfelde (Berlin) and Jonathan Messe at Contemporary Fine Arts (Berlin), to mention only a few.

At the cour carrée du Louvre

The Cour Carrée will house 85 galleries, including 25 new ones exhibiting for the first time or coming back to FIAC — 11 in the Lafayette Sector.

Among the noteworthy events in the Cour Carrée will be solo exhibitions by Boris Mikhailov at Suzanne Tarasiève (Paris), Michael Lin at Nogueras Blanchard (Barcelona), Noel Dolla at Dominique Fiat, the joint presentation of works by Olivier Mosset and François Morellet at Martine and Thibaut de la Châtre (Paris) as well as the exhibition of photographs by Carlo Mollino staged by Salon 94 (New York) and an outstanding work by Barry X Ball devised specifically for FIAC, Sleeping Hermaphrodite, a black marble sculpture made in close collaboration with the Musée du Louvre, referring to the famous Hermaphrodite Endormi.

Lastly, with the objective of strengthening and widening its commitment to the newest galleries, and thanks to a partnership with Adagio, FIAC will subsidize the accommodation costs of the 51 non-Parisian exhibitors at the Cour Carrée for the duration of the Fair.

The Lafayette sector and the prix Lafayette

Following their first collaboration in 2009, FIAC and its official sponsor, the Galeries Lafayette group, are renewing their support for up-and-coming galleries with the Lafayette Sector. This programme brings together 16 galleries in the Cour Carrée, selected by a jury consisting of Pierre Bal Blanc (Centre d’Art Contemporain, Brétigny), Mathieu Copeland (exhibition curator, London), Beatrix Ruf (Kunsthalle, Zurich) and Marc-Olivier Wahler (Palais de Tokyo, Paris) for the quality of their forward programming, and on the basis of a specific project for FIAC involving one or two artists.

This programme gives each gallery a significant financial subsidy towards its participation in FIAC and will lead to the award of the Prix Lafayette 2010 on Thursday, 21st October. It consists of the acquisition of a work by the Galeries Lafayette group as well as the presentation of an exhibition at the Palais de Tokyo in October 2011, along with a sum of money for the production of a new work.

Carol Bove, the winner of the Prix Lafayette 2009, represented by the Hotel gallery (London), will be exhibiting at the Palais de Tokyo from 7th to 31st October 2010.

This programme demonstrates the shared desire of FIAC and the Galeries Lafayette group to give serious support to the players on the young international art scene. For the Galeries Lafayette, that commitment fits into the context of an all-embracing supportive approach to the whole chain of production and distribution of contemporary creative work, in which galleries are a crucial link.

Outdoor projects in the Tuileries Gardens

For the fifth year running, FIAC is joining forces with the Musée du Louvre to present a programme of outdoor works in the Jardin des Tuileries. The growing interest of the galleries and artists, as well as the unique setting of the gardens, has made it possible this year to bring together some 20 projects, an assortment of installations, sculptures, or sound works that, in interaction with the public, take shape between the pathways, ponds and lawns of the gardens. Among the artists chosen this year, FIAC is delighted to present new works by Subodh Gupta, Allora & Calzadilla, Mark Dion, Thomas Houseago, Jonathan Messe, and emblematic pieces by artists including Franz West, Yayoi Kusama and Carl André.

An ever wider public is demonstrating a lively interest in the itinerary through the Tuileries and is paying special attention to modern and contemporary creative work. So FIAC wanted to give added impact to the cultural outreach associated with these outdoor projects by setting up an outreach facility in partnership with the Ecole du Louvre, from Wednesday 20th to Sunday 24th October 2010 between 3pm and 5pm.
Cinéphémère

FIAC is joining forces with the Ricard corporate foundation to present Cinéphémère in the Jardin des Tuileries in collaboration with the Musée du Louvre. Cinéphémère is a 14-seat cinema installed in a specially adapted container. Between 5 and 10 artists’ films, each lasting no more than 30 minutes, will be projected daily while FIAC is being held. The programme will be available shortly on the FIAC website

“Telegrams from the Nose”, a stage work devised by William Kentridge and François Sarhan, will be presented at the Louvre Auditorium as will three seminal performances by Guy de Cointet — “Two Drawings” (1974), “Going to the Market” (1975) and “My Father’s Diary” (1977). A publication will be issued to coincide with the event.

At the Auditorium of the Grand Palais, FIAC, in conjunction with the CNAP, will present a lecture/performance by Aurélien Froment in two phases entitled “Les nouveaux territoires performatifs” which will examine a certain up-to-the-minute aspect of the performative genre.

Again in conjunction with the CNAP, Dora Garcia will present her performance “Répétition, Rétrospective / Repetition, Rehearsal” at the Théâtre National de Chaillot. Finally, FIAC is joining forces with the Jeu de Paume to present the performance by Tomo Savi-Gecan which relates to a consideration of museum institutions.

For the week during which FIAC is held, YCI, organized with the support of the Ricard corporate foundation since 2006, will bring together five young exhibition curators from throughout the world in Paris. They are chosen on the basis of proposals by an international committee, this year consisting of Anne Ellegood, Senior Curator at the Hammer Museum (Los Angeles), Jens Hoffmann, Director of the CCA Wattis Institute for Contemporary Arts (San Francisco), Hu Fang, Artistic Director of Vitamin Creative Space (Guangzhou), Christine Macel, exhibition curator at the MNAM Centre Pompidou (Paris), and Beatrix Ruf, Director and Curator at the Kunsthalle (Zurich).

Since its inception, the YCI programme has allowed 30 young international curators to familiarise themselves with the French art scene. The names of the young curators selected for the 2010 session will be available shortly on www.fiac.com.

FIAC reaffirms its commitment to work alongside the ADIAF and the Centre Pompidou by receiving at the Cour Carrée the projects of the four artists pre-selected for the Prix Marcel Duchamp 2010: they are Céleste Boursier-Mougenot, Cyprien Gaillard, Camille Henrot, Anne-Marie Schneider.

The name of the prize-winner will be announced in the Cour Carrée du Louvre on Saturday 23rd October at 11am.