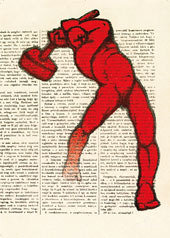 In the center of the upcoming exhibition “Manganese Make my Colors Blue”, opening 5 October 2010, at the MAK Gallery, is a room-filling six-meter ceramic sculpture, produced in a labor-intensive process especially for the MAK, as well as a selection of recent photographs by Peru-born artist David Zink Yi. Relating art and nature, he takes up the tradition of the cosmopolitically inspired cabinets of art and curiosities of the 16th to 18th centuries.
Another influence on Zink Yi’s choice of motifs is the artistic examination of scientific research that came to pass in the 1920s when models from nature were incorporated in the Modernist canon of forms.

In the exhibition, the sculpture which is modeled on the Architeuthis, the giant squid, a fabulous ancient sea animal, is juxtaposed to nighttime photos of a cedar. The pictures oscillate between abstract motif and suggestive metaphor.
Together with the sculpture and the whole atmospheric setting that Zink Yi develops for the MAK Gallery the objects unfold into studies of form and aesthetics, matter and transformation. Interested in its unique anatomy, Zink Yi translates the lifeless body of the squid, a mythological creature and much- represented subject in fine and applied art well up to the mid-19th century, into contemporary sculpture.

The counterpart of the sculpture are large-sized photographs of a cedar, the motif of an abstracting understanding of form and a dualist symbol of the division between nature and culture as well as a vision of a universalist world view. Photographed at night, the structure of the tree transforms into an apparently three-dimensional carrier of color and light.

In the interplay of formations of organic structures, which he sets up as models, as it were, Zink Yi operates in the field of tension between reality, materiality, and the dissolution of narrative interpretation.

The artwork of Zink Yi, born 1973 in Lima, Peru, comprises sculpture, installation, photography and film. Thematically, Zink Yi, who lives and works in Berlin, addresses universal issues of identity and world-view. Starting out from analytical creative processes, he subtly formulates social stocktakings that reflect breaches of cultural codes. Based on intensive research and innovative ways of production, the development of Zink Yi’s projects frequently takes several years. In a fragmentary manner, he also introduces biographical references and mythologically charged visual narratives that combine into scenarios between reality and fiction.

Curator: Kathrin Pokorny-Nagel, head of the MAK Library and the Works on Paper Room

Mihály Biró, one of the best-known and most uncompromising Hungarian graphic designers of the early 20th century, is the subject of the exhibition Pathos in Red at the MAK Works on Paper Room. This socially and politically dedicated artist originated a genre which, in 1920, was new in Austria: the politically motivated pictorial poster. A representative selection chosen from the 45 Biró posters in the MAK collection will be presented starting on 6 October 2010. The works on exhibit will include variants of the Red Man with Hammer (1912), which is inseparably linked with Biró's name and garnered him international acclaim.

The exhibition centers on those posters which document the events in Austrian and Hungarian politics during the prewar and interwar periods, as well as utilitarian graphic works and advertising posters (including for the Vienna Trade Fair, Julius Meinl, Abadie and MEM), postcards, photographs and a series of 20 lithographs—the so-called Horthy Portfolio.

Budapest native Mihály Biró (1886–1948) joined the Social Democratic cause early in life. He spent the period between 1910 and 1914, designing striking and widely noted posters and illustrations for the SZDP (Hungarian Social Democratic Party) and its newspaper Népszava. These images, directed against war, oppression and exploitation, constituted an appeal for humanism, social justice and progress. The success of these works led to Biró’s receiving commissions for cultural and commercial posters, and he soon became one of the most-employed graphic designers of his era. One of Biró’s best-known posters—for “Palma Rubber Soles” (1911)—was printed in numerous versions. The variant owned by the MAK shows a slim dandy, his top hat balanced on his hand, traipsing lightly across the top of monumentalized, three-dimensional lettering.

Following the First World War, Biró became the graphic mouthpiece of the new “Hungarian Red Army” of the Hungarian Soviet Republic. The advent of the right-wing dictatorship of Miklós Horthy soon forced him, however, to flee to Vienna, where he found refuge between 1919 and 1928. The Horthy Portfolio (1920) presented in this exhibition marked a decisive break in his life.

With this now-rare work, consisting of 20 color lithographs, Biró managed to produce a haunting documentation of the atrocities of the Horthy regime. The collection amounts to the visualization of reports by Hungarian emigrants in Vienna who told the graphic designer of the dramatic events taking place back home. These works provoked official letters of protest from the Horthy government, which in turn led to Biró’s persecution.

The year 1920 also saw Biró—now based in Vienna—design all of the Social Democrats’ illustrated posters for the national parliamentary elections. In doing so, he became the creator of their interwar-period “corporate identity.” He did six different election posters in all, of which the heroic giant worker with the hammer was the most powerfully expressive.

Alongside the political posters—Birós true calling—he also created posters for individual businesses and the film industry, which was booming during the interwar period. Among the most spectacular works of this phase of Biró’s career are the posters which he created for the company MEM (an acronym for Martin Emil Mayer), a producer of toiletry items. The company’s name impresses itself upon the viewer’s mind in a special way by being either enlarged or redesigned. The gigantic letters “MEM,” superimposed on each other, appear to form a futuristic company factory. In another example, the monumental letters form the supporting structure for the Ferris wheel in the Prater, one of Vienna’s most famous landmarks. These boldly abbreviated, lettering-based advertisements had both spatial and suggestive effects.

In 1928, the graphic designer moved to Berlin, a city in which art and theatre were in the midst of a golden era. During the years that followed, he created numerous film posters for the film studio UFA, at which he had taken a job. The rise of National Socialism, however, caused Biró’s financial situation to become increasingly perilous. His return to Vienna between 1932 and 1934 brought hardly any improvement to his situation—apart from the odd advertisement, he was unable to find new work. Biró finally fled from Austrofascism in 1934 and settled in Czechoslovakia, where he became ill and depressed.

In 1938, he succeeded in fleeing on to Paris, where he was to stay until 1947. But as an artist, his situation there was no less hopeless than before; he became increasingly ill, and his physical condition deteriorated. He eventually landed in the Rothschild Hospital with a severe lung ailment, and it is there that he was found—as one of that institution’s few survivors—when Paris was liberated on 24 August 1944. It was only in 1947 that he was able to return to Budapest, where he died in 1948.