During the Francis Alys retrospective 3 different curators present 3 different artists: Angelique Campens has chosen the Danish artist Kasper Akhoj, who present snumber of his research-based works After the Fair. The work of Evelyne Axell has been reinterpreted as one of the first provocative and hedonistic work of the counter culture of the late 60's, by Dirk Snauwaert in Contestatory Images. Elena Filipovic presents the Scottisch artist Lorna Macintyre and her exhibitionin Granite and Rainbow, based on Virginia Woolf's The Waves. In the Project Room the artist in residence Laurent Dupont with the project 'Garitte: To decide'. 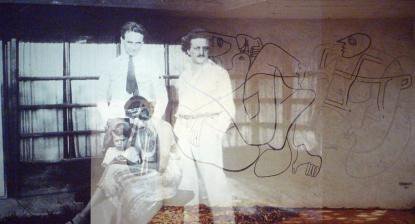 For his exhibition “After the Fair” Danish artist Kasper Akhøj will present a number of his research-based works incorporating photography, slide projections and sculptural installation.

Starting out somewhere not so distant from the testimony gathering and fact-finding methods of a historian, combined with an element of chance, the works in the exhibition propose a counterpoint to previously registered stories of modern architecture and design.

Through an accumulation of collected narratives, historical layers, associations, digressions and formal play, Akhøj arrives at a reconfiguration of significant but lesser known architectural endeavors which have been sidelined merely by force of circumstance.

For the project Welcome (TO THE TEKNIVAL), a work in progress since 2008, he revisits Eileen Gray’s Villa E.1027. Through an ongoing restaging of a series of images that Eileen Gray and Jean Badovici (her collaborator on the house) published for the first time in 1929, Akhøj examines as well as documents the process of restoration currently taking place at this site.

The installation Abstracta, also a work in progress since 2007, refers to a modular display system designed by the Danish architect Poul Cadovius for a 1960 world’s fair. In this project Akhøj followed a journey backwards in time from the present day scrap yards of post-communist Yugoslavia where he first encountered the system, revealing a surprising tale and semi-circumnavigational route around the world. It concludes where it started, in the high-spirited markets of Scandinavian midcentury modernist design. In so doing he sheds light on production processes both inside and outside modern capitalism. The resulting work is a travelogue and installation of free floating abstract sculptures made from found objects that will be modeled for the space in Wiels.

The exhibition presents the work of Evelyne Axell, a Belgian Pop artist (born in 1935 in Namur, died in 1972 in Brussels) and early feminist whose represention of female sexuality has recently been rediscovered.

Earlier this year, her work attracted much attention in an important exhibition organized by the University of the Arts in Philadelphia (USA) and entitled "Seductive Subversion: Pop Women Artists 1958-1968". In the context of this exhibition, Evelyne Axell's work was reinterpreted and recognized as one of the first provocative and hedonistic work of the counter culture of the late 60's.

Through a dozen works, the exhibition at Wiels addresses the relationships between subject and form which, in Evelyne Axell's work, lead to playful and erotic pop-psychedelic images. Some works in this show address societal issues related to political events of the time (May 68, the racial laws in the U.S., the student movements etc); others are provocative and seductive representations of female sexuality and its role in the sexual revolution, a theme that Evelyne Axell continuously explored during her short career. Even within the Pop movement, Evelyne Axell's explicit and exuberant images occupy a special position, which the exhibition, but also a lecture and a documentary film, will demonstrate.

Lorna Macintyre bases the new sculptural and photographic installation for her first solo exhibition in Belgium on Virginia Woolf’s The Waves, written in 1931, the same year that the former brewery was built in which the exhibition takes place. Taking this fortuitous temporal connection between Woolf’s most experimental novel and the origins of Wiels Contemporary Art Centre, Macintyre weaves an elusive narrative in space that centers on the passage of time – from sunrise to sunset – that is the red thread of The Waves. The obdurate solidity of granite and the fleeting, almost illusory status of the rainbow, these elements which repeatedly appear together in Woolf’s writings speak to some of the opposing tensions within the artist’s practice: on the one hand working with a formal and restrained vocabulary of materials while at the same time drawing on somewhat lofty literary or romantic ideas. In the process, Macintyre thus extends her interest in giving a concrete form to literary sources, which she often does through the construction of handmade assemblages of found objects or photographic recordings of quotidian moments that start from a textual or mythological starting point. Little in the result obviously or explicitly reveals her sources, which are transformed by chance, gesture, and interpretation, but one could say that it is precisely in this process of translation that her elegant compositions in space using photography, sculpture, video, and display structures find their particular way of speaking.

Lorna Macintyre (born 1977 in Glasgow  where she continues to live and work) pursued her studies at the Glasgow School of Art and Hunter College in New York. Over the last few years her works has been included in group exhibitions at such institutions as the Austrian Cultural Forum, New York; A Foundation, London; Akureyar Art Museum, Iceland; Tramway, Glasgow, as well as being featured in ArtFutures, Bloomberg Space, London. Recent solo shows include “Form and Freedom” at the Kunsthaus Baselland in 2010; “Sentences not only Words” at Mary Mary Gallery, Glasgow in 2009; “Nought to Sixty” at the Institute for Contemporary Art, London; and the “The Word for World is Forest” at Galerie Kamm, Berlin, both in 2008.

1. reside - make one's home in a particular place or community
domicile, domiciliate, shack
rusticate - live in the country and lead a rustic life
inhabit, live, populate, dwell - inhabit or live in; be an inhabitant of; "this kind of fish dwells near the bottom of the ocean";

3. reside - be inherent or innate in
repose, rest
inhere in, attach to - be part of; "This problem inheres in the design"

WIELS - Contemporary Art Center
Avenue Van volxem, 354, Brussels
Wednesday through Sunday: 11-18
Nocturnes until 21.00 every 1st and 3rd Wednesdays of the month
Closed on Mondays and Tuesdays