New Pott. 100 Light /100 Faces. In a participatory project, the artist gave people and their families from all over the world - now living in the Ruhrgebiet - a lamp to illuminate their private space, converting it into a stage/platform upon which the artist and people from 100 different countries encounter one another. The project will be presented as an installation. 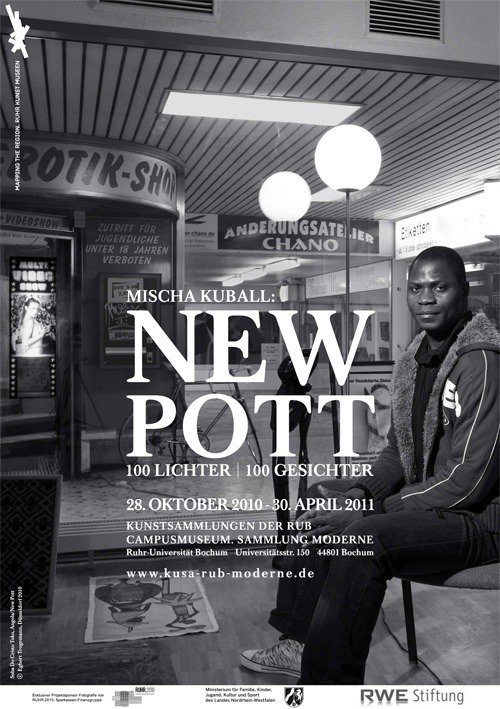 With NEW POTT. 100 Light /100 Faces, Mischa Kuball has devised a work for the cultural capital of RUHR.2010 that literally countenances the multicultural reality of the Ruhr metropolis. How does one go about depicting the multicultural essence of the region artistically? Mischa Kuball has opted for a participatory project: people and their families from all over the world, now living in the Ruhrgebiet, become active participants in his project. The artist gives them a lamp to illuminate their private space, converting it into a stage—a platform upon which the artist and people from 100 different countries encounter one another. They tell him their life stories and the specific reason for emigrating, as well as reflecting the twilight experience of being stuck between two cultures. In so doing, the bright floor lamps act as illuminated signs of both the encounter and exchange.

Egbert Trogemann has documented the encounters photographically and filmed them on video. His photographs have been incorporated in the artwork. Using the photographs of the participants and their respective domestic interiors, Mischa Kuball has created 100 tableaux that can be viewed both in the tradition of comparative photography as well as being read as studies on a multicultural society in transition. Over and above this, the multimedia documentation of the encounters facilitates a better appreciation of the conversations between the artist and the individuals from 100 different countries.

The exhibition Mischa Kuball: NEW POTT. 100 Lights/100 Faces, which runs from 28 October 2010 until 30 April 2011 in the Kunstsammlungen der Ruhr-Universität Bochum at the Campusmuseum, provides an insight into the large-scale artistic study. The project will be presented here as an installation: Mischa Kuball exhibits lamp objects and 100 photographic tableaux, as well as video footage presenting the 100 encounters in a variety of ways.

The 100 conversations form the fabric of a many-voiced narrative about the Ruhrgebiet; the 100 encounters re-chart the area very much in the sense of "Mapping the Region".

A catalogue on the exhibition (edited by Harald Welzer, Christoph Keller and Mischa Kuball) provides a commentary on the 100 transcriptions and represents comprehensive material for further research.

A conference on the subject will take place on January 21– 22, 2011 on the occasion of the exhibition in the Kunstsammlungen der RUB. The conference will reflect upon the issues raised in NEW POTT within an extended discursive field. It incorporates the project into an artistic and academic debate in response to "Relational Art's'" embrace of both art and society's current situation and complexity. Theorists in the fields of art and letters, social psychologists and international artists will discuss forms, possibilities and potentialities of contemporary participatory art. The catalogue and conference proceedings (edited by Friederike Wappler) will be published by JRP|Ringier Verlag, Zurich as complimentary volumes.

Access to the conversations is also available via the Internet. The interviews can be viewed online at 2010lab.tv. The Exhibition is part of "Mapping the Region", a common exhibition project of the RuhrKunstMuseen in the framework of RUHR.2010.

The project has been generously supported by the North Rhine-Westphalia Ministry for Families, Children, Youth, Culture and Sport, the RWE-Foundation and RUHR.2010 GmbH (the Sparkasse Finance Group is the exclusive project sponsor of RUHR.2010 Photography).