Without Name. In this exhibition, Helms continues his exploration of masking and identity, an idea he uses as a framework in his portraits of militia, subversive political groups and irregular combatants. His new work presents the viewer with images, through both drawing and photographic material, that function as signifiers pointing to issues of representation. 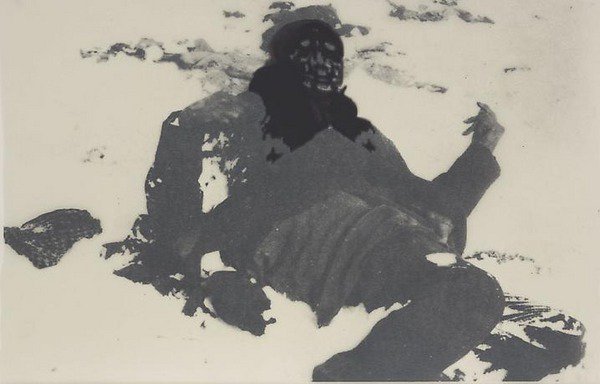 Marianne Boesky Gallery is pleased to announce an exhibition of new work by Adam Helms. This is the artist’s second New York solo show at the gallery.

In this exhibition, Helms continues his exploration of masking and identity, an idea he uses as a framework in his portraits of militia, subversive political groups and irregular combatants. This body of work deals with representations of archetypical figures and symbols that are in some sense recognizable, yet undefined by a unified viewpoint or definitive individuality. Helms’ new work presents the viewer with images, through both drawing and photographic material, that function as signifiers pointing to issues of representation, psychology, politics, and militarism, but which manage to evade a specific identification or singular definition and are ultimately, without name.

In the main gallery, Helms presents a series of forty eight charcoal portraits that function in response to Gerhard Richter’s “48 Portraits” (1971-72) – a group of paintings that depicted 20th century icons of Western literature, philosophy, and science, such as Einstein and Kafka. As a counterpoint, Helms’ “Untitled (48 Portraits, 2010)” portrays insurgents, militia, guerrillas and subversives whose individual identities are for the most part, unknown and ambiguous. Instead, his figures exist in opposition to the canonical individuals represented in Richter’s paintings. The work is a meditation on an archetypal identity, one that is abstracted – as much through its mediated origins – as its representations of individuals who are veiled, violent and unfamiliar; existing in the margins compared to those within the visible positions of power of everyday culture. Helms developed these portraits through a contemporary means of image mediation. Similar to Richter’s ability to create paintings as simulacra of encyclopedic photographs, Helms begins his process by culling source material from the Internet, propaganda videos and scanned images. This image mediation is then retained in Helms’ drawings through his ability to emphasize areas of distortion and abstraction found in the source images, within a representational portrait.

As a continuation of investigating the iconography related to radical mentalities and associated groups, Helms presents three large charcoal “flag” drawings in the first gallery. The drawings are the exact scale of a standard flag and depict an amalgamation of layered heraldry and symbols. With these drawings, the artist references a tension between the mechanical production of graphic imagery and the handmade mark, resulting in a texture that is achieved through his use of charcoal and paper.

Also included is a double-sided light box sculpture entitled “Earthworks / The Ecstatic Experience,” which marks a new format for the artist’s photographic assemblages. The sculpture is a freestanding monolithic work illuminating a collection of photographic images and iconography projected on either side. Similar to Helms’ other work, he uses appropriated and found imagery as his source material. One side of the piece references representations of the landscape and its manmade artifacts; the other provides associations amongst portrayals of an individual psychology and collective experience. Minimalist in its form, this duel assemblage functions as a portrait of the figure and the landscape.

Adam Helms lives and works in New York. He was a recipient of the Rema Hort Mann Foundation Visual Grant Award, the Louis Comfort Tiffany Foundation Award, and was an artist in residence at the Chinati Foundation in Marfa, Texas. His work has been exhibited at the Walker Art Center, Minneapolis, the Kemper Museum of Contemporary Art, Kansas City, the New Museum of Contemporary Art, New York, and the Solomon R. Guggenheim Museum, New York. Helms’s work is included in the collections of the Walker Art Center, the Whitney Museum, the Guggenheim Museum and the Dakis Joannou Collection.

For further information or images, please contact Adrian Turner at 212.680.9889 or adrian@marianneboeskygallery.com.

Marianne Boesky Gallery is located at 509 West 24th Street, between 10th and 11th Avenues.
Our hours are Tuesday to Saturday from 10am to 6pm.