Yoshua Okon: 2007-2010, is a collection of five of the artist's emotionally charged, multi-channel video installations as part of YBCA's Big Idea Encounter: Engaging the social context. Audience as Subject, Part 1: Medium presents works that have been created in the last six years focusing on the subject of the audience. Featuring an international roster of artists, the exhibition is presented as part of YBCA's Big Idea Dare: Innovations in art, action, audience. 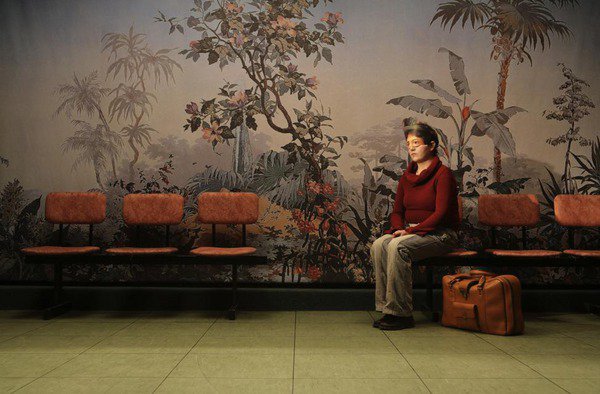 Yerba Buena Center for the Arts is pleased to present two new major exhibitions, both opening on Saturday, October 30, as part of its 10_11 season of Big Ideas.

Yoshua Okón: 2007-2010, is a collection of five of the artist’s emotionally charged, multi- channel video installations as part of YBCA's Big Idea ENCOUNTER: Engaging the social context. Audience as Subject, Part 1: Medium presents works that have been created in the last six years focusing on the subject of the audience. Featuring an international roster of artists, Audience as Subject, Part 1: Medium is presented as part of YBCA’s Big Idea DARE: Innovations in art, action, audience.

Yoshua Okón’s video installations are built on improvisational narratives created by the artist and his collaborating performers, mostly non-actors willing to participate in a game of social chance that may easily spiral out of control. Centered around emotionally charged expressions of power and contemplations of fear, death, sex, and nationhood, these works provoke viewers to consider questions of social conduct and the behavior of individuals within systems of social restraint. Okón further challenges viewers to question their own attitudes towards power, ethics, and prejudice, particularly as they relate to class and race. Maintaining a belief that humanity holds within its grasp a complex web of fears and desires, Okón enacts psychological violence charged with absurdity and humor.

Among the works included in the exhibition are Bocanegra (2005-2007), a work never seen before in the US, in which Okón collaborated with a group of Nazi enthusiasts who dressed up in vintage uniforms and were recorded in a variety of orchestrated situations; Canned Laughter (2009), a simulation of a maquiladora (a factory on the northern border of Mexico) that “cans laughter,” juxtaposing the spontaneity of emotion with the grim realities of contemporary industry; Hausmeister (2008), in which a man comes out of a mouse-hole-like opening in the wall and crawls on the ground hissing and growling; Hipnostasis (2009), a collaboration with Raymond Pettibon which explores the subculture of old hippies and beach bums from Venice Beach; and Rusos Blancos/White Russians (2008), a collaboration involving a family and residents of a remote desert area in California who rehearse performances for invited spectators.

Yoshua Okón was born in Mexico City where he currently lives and works. While his primary medium is video, Okón considers himself a performance artist, as his work documents invented scenarios created for the camera in collaboration with invited participants. Interested in the tension between artificiality and hyper-reality, Okón’s work dramatizes the dissolution of the boundaries between public and private, external and internal that occurs once the camera is turned on. He has shown his work extensively in North America, Latin America and Europe. In 1994, Okón and Miguel Calderon founded the internationally acclaimed La Panadería, a vibrant, non-profit, artist-run space in Mexico City that has become a model throughout Latin America. He is also the founder of SOMA, “an experimental project conceived to optimize discussion and exchange in the field of contemporary art,” which opened to the public in January 2010.

Organized by Betti-Sue Hertz, Director of Visual Arts, Audience as Subject, Part 1: Medium is the first of a two-part group exhibition that considers audiences of live events as single living organisms as well as the individuals in attendance. The focus here is on the subject of the audience in a range of representations from collective mass to individual expressions, attitudes, and gestures, when considering new roles for spectatorship as constructed, conceived or imagined by contemporary artists. The exhibition is inspired by artworks that take into account the shift from a gazing audience to a producing audience, as an example of larger changes in perceptions about participation in civic life.

Part 1: Medium features works that focus on audiences in medium-sized venues such as theaters, TV studios, and a city bus. Part 2: Extra Large focuses on audiences at stadium scale concerts, sports events and expansive political gatherings. It will take place at Yerba Buena Center for the Arts in Winter/Spring 2011.

Audience as Subject, Part 1: Medium - Participating artists Gabriel Acevedo Velarde is interested in the collective processes of leftist politics in dialogue with the agency of individuals especially when confronted with violence perpetrated by the militarist arm of government. In his animation Escenario (2004) the audience is a place where the populace may declare its strength in numbers and the stage a site for exposing the vulnerability of individuals.

caraballo-farman presents Venerations (Applause 3), 2010, an installation of multiple videos set up to surround the viewer, comprised of over 1500 clips of audiences applauding in TV studios for live talk shows are shown on continuous loops. Stefan Constantinescu’s film, Troleibuzul 92 (2009) is constructed as a serial narrative. A man on a trolley bus makes several phone calls to his wife or girlfriend, often threatening her in an abusive manner. The other passengers on the bus meanwhile become an unwilling audience to the abuse.

For the video installation titled Isola Bella (2007-2008), Danica Daki! works within the framing device of a theatrical setting, instructing non-actors from the audience to rehearse their life stories within classical forms of storytelling. Staged in front of a 19th-century wallpaper design, the actors, all residents of the Home for the Protection of Children and Youth near Sarajevo, relate incidents from their own lives, often referencing the trauma of war, behind fanciful masks. For Adrian Paci, the main factor that binds groups is cultural identity, which is symbolized by participation in common actions, and is also a mechanism for the socialization of individuals. Turn On (2004) is shot in the artist’s birth city of Shkoder, Albania, and features middle-aged Albanian out of work laborers sitting on the steps of the town square.

Shizu Saldamando’s portraits focus on individual style, identity and group dynamics at arts events, especially those featuring alternative culture. YBCA commissioned the artist to create new work based on recent live events at YBCA and other venues in San Francisco. Ulla von Brandenburg draws on different cultural and historical references, as well as older conventions of representation to create layered, symbolic, and codified narratives that explore patterns of behavior and enigmatic ritual. For her wall painting, Publikum (Audience) (2008), von Brandenburg’s depiction of a theater audience staring at the stage represents a mirror effect between the image and the viewer.

ABOUT YERBA BUENA CENTER FOR THE ARTS

Yerba Buena Center for the Arts (YBCA), located in San Francisco's Yerba Buena cultural district, is one of the nation's leading multidisciplinary contemporary arts centers. With a belief that contemporary art is at the heart of community life, YBCA brings audiences and artists of all backgrounds together to express and experience creativity. The organization is known for nurturing emerging artists at the forefront of their fields and presenting works that blend art forms and explore the events and ideas of our time. As part of its commitment to the San Francisco Bay Area, YBCA supports the local arts community and reflects the region's diversity of people and thought through its arts and public programming.

Each year, YBCA selects four Big Ideas around which to organize its wide-ranging programs. This year's Big Ideas include: ENCOUNTER: Engaging the social context; SOAR: The search for meaning; REFLECT: Considering the personal; and DARE: Innovations in art, action, audience. These ideas, which encompass art from all disciplines, are designed to focus an investigation of contemporary art and its relationship to the larger world. Using the Big Ideas as portals, YBCA has established a framework of thought that invites exploration and risk-taking, quiet reflection and active engagement.

Community Engagement and Audience Development programs are made possible by Dance/USA, supported by the Doris Duke Charitable Foundation and the James Irvine Foundation, and by a generous grant from the Wallace Foundation. Free First Tuesdays is underwritten by Directors Forum Members.