Blinky Palermo: Retrospective 1964-1977. The exhibition provides an in-depth examination of the evolution of Palermo's aesthetic, illustrating the significance of his contribution to post-war art. It surveys the 4 principal groups of his oeuvre. "William Eggleston: Democratic Camera-Photographs and Video, 1961-2008" brings together more than 200 photographs, including his iconic images and provocative video recordings. Teresa Margolles has created a series of 6 custom-made concrete benches to be exhibited near the north piazza of the BP Grand Entrance at Lacma for Land's exhibition Via/Stage 2. 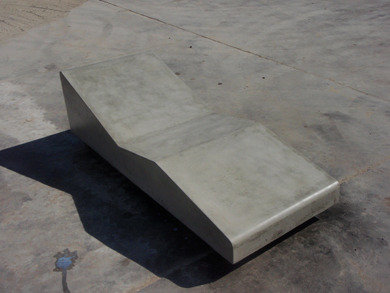 The Los Angeles County Museum of Art (LACMA) presents Blinky Palermo: Retrospective 1964–1977, on view October 31, 2010 through January 16, 2011. The exhibition comprises more than seventy works by the German artist, whose reputation as one of the foremost postwar painters has been long established in Europe. This encompassing exhibition will introduce American audiences to all four principal categories of work Palermo produced during his highly influential career, including many works that have never before been shown in the United States. Curated by Lynne Cooke and organized by Dia Art Foundation and the Center for Curatorial Studies at Bard College (CCS Bard), the exhibition will be coordinated at LACMA by curator of contemporary art, Franklin Sirmans.

"Palermo's experiments with color, form, material and space were groundbreaking forty years ago, and today they continue to astound with their poetic clarity," said Sirmans. "LACMA has continuously presented a strong commitment to modern and contemporary German art and Palermo's presence in that continuum will be deeply felt here in Los Angeles."

The exhibition provides a fresh and in-depth examination of the evolution of Palermo's aesthetic, illustrating the significance of his contributions to the field of postwar painting. Surveying four major types of work over his career, the retrospective includes: objects created shortly after he graduated from Joseph Beuys's class at the Düsseldorf Art Academy in 1964; Cloth Pictures (Stoffbilder); documentation of in situ Wall Paintings and Drawings; and examples of his late Metal Pictures.

"Palermo has, to date, been very much an "artists" artist,"—that is, he is greatly admired by his peers and by younger generations, many of whom have drawn on his work in remarkably diverse ways," said exhibition curator Lynne Cooke. "Not least, he offered a model for a practice that contests the dominant role of the art market by exploring alternative contexts and opportunities."

Blinky Palermo
Blinky Palermo was born Peter Schwarze in 1943 in Leipzig, where he and his twin brother, Michael, grew up as adopted children under the name Heisterkamp. In 1962 he entered the Kunstakademie Düsseldorf, where he studied with Joseph Beuys, and in 1964 he adopted the name Blinky Palermo, which he appropriated from an American boxing manager and mafioso. His first solo show was held in 1966 at Galerie Friedrich+Dahlem in Munich. In 1970 he made the first of several trips to the United States, relocating in 1973 to New York City, setting up a studio there which he would maintain for the rest of his life.
Palermo died in 1977, while traveling in the Maldives. His large-scale work To the People of New York City (1976) was shown at Dia in Chelsea, in 1987. During his lifetime, Palermo participated in more than seventy exhibitions including Documenta (1972); the 13th São Paulo Biennial (1975); and the Venice Biennale (1976). Posthumous retrospectives have been presented at the KunstmuseumWinterthur (1984); the Kunstmuseum Bonn (1994); Museu d'Art Contemporani de Barcelona, in co-production with the Serpentine Gallery, London (2002–2003); and the Kunsthalle Düsseldorf and Kunstverein für die Rheinlande und Westfalen, Düsseldorf (2007).

Following its presentation in Los Angeles, Blinky Palermo: Retrospective 1964–1977 will be shown at the Hirshhorn Museum and Sculpture Garden, Washington, DC, from February 24 through May 15, 2011, then concurrently at Dia: Beacon and CCS Bard from June 25 to October 31, 2011.

Blinky Palermo: Retrospective 1964—1977 has been curated by Lynne Cooke. Organized by Dia Art Foundation and the Center for Curatorial Studies at Bard College, it will be accompanied by a full-color publication, co-published by Dia and Yale University Press.

The national tour of Blinky Palermo: Retrospective 1964—1977 is made possible by Gucci. Additional tour support is provided by The Andy Warhol Foundation for the Visual Arts, the Brown Foundation, the National Endowment for the Arts, and Glenstone. The Los Angeles County Museum of Art presentation is sponsored by Christie’s.

The Los Angeles County Museum of Art (LACMA) presents William Eggleston: Democratic Camera—Photographs and Video, 1961–2008, the most comprehensive U.S. retrospective of the Memphis-based contemporary photographer. The exhibition traces the artist’s evolution over a five-decade-period and brings together more than 200 photographs, including his iconic images of familiar, everyday subjects in addition to lesser-known, early black-and-white prints and provocative video recordings. A key figure in American photography, Eggleston is credited with nearly single-handedly ushering in the era of color photography. His inventive use of color and spontaneous compositions have profoundly influenced subsequent generations of photographers, filmmakers, and viewers. LACMA’s presentation is the first Los Angeles retrospective of the artist in more than three decades and will be on view October 31, 2010 through January 16, 2011.

“Eggleston is a master of color photography, whose extraordinary sense of spontaneity, innovative viewpoints, and rendering of modern synthetic hues makes vivid the otherwise overlooked details of ordinary life. His unflinching portrayal of quintessentially American scenes such as supermarkets, drive-ins, sidewalks, and parking lots is one of the defining achievements of contemporary photographic practice,” said Edward Robinson, associate curator of the Wallis Annenberg Photography Department, who organized LACMA’s presentation.

Exhibition Overview
William Eggleston: Democratic Camera—Photographs and Video, 1961–2008 demonstrates Eggleston’s “democratic” approach to his photographic subjects in both color and black-and-white. Everything that happens in front of the camera is worthy of becoming a picture for the artist—no matter how seemingly circumstantial or trivial. Eggleston finds his motifs in everyday life, resulting in telling portrayals of American culture. An unparalleled chronicler of the American South, Eggleston has produced a veritable encyclopedia of the Southern vernacular. His focus has been primarily upon his native locales of Memphis, New Orleans, and the Mississippi River Delta. Highlights from the last twenty years include selections from the “Graceland” series and “The Democratic Forest,” Eggleston’s anthology of the quotidian. Exclusive to LACMA’s presentation is an expanded emphasis on Eggleston’s more recent work taken in the Los Angeles region, the employment of his photographs on numerous music album covers, and his inspiring influence on leading American filmmakers of today.

The exhibition also includes Eggleston’s cult video work, Stranded in Canton (1973-1974). In the 1960s, Eggleston used film to document Fred McDowell, a well-known Delta blues musician, but ultimately abandoned the film project. Eggleston later acquired a video camera and began using video to shoot in bars and in people’s homes; sometimes he shot monologues friends delivered for his video camera, most often at night. The result, Stranded in Canton, recently restored and re-edited, is a portrait of a woozy subculture that adds dimension and texture to the world of Eggleston’s color photographs.

About Eggleston
Born in 1939 in Memphis, Tennessee, and raised on his family’s cotton plantation in Mississippi, William Eggleston held a casual interest in photography until 1959, when he discovered photo books by Henri Cartier- Bresson and Walker Evans. Among his earliest works, made during stints at universities in Tennessee and Mississippi, were black-and-white scenes found in his native South, as well as portraits of friends and family.

By the 1960s and early 1970s, Eggleston had begun experimenting with color photography, and he eventually produced rich, vivid prints through the dye transfer process—prints that are created through the alignment of three separate dye matrices (cyan, magenta, and yellow) generated from three separate negatives (red, green, and blue filters). The resulting prints are known for the vividness and permanence of their colors. The psychological intensity of the saturated color in Eggleston’s pictures has had an enormous impact on the entire field of photography. As an influence, Eggleston has cited the Technicolor technique in the films of Alfred Hitchcock.

Eager to show his work to a broader audience, Eggleston traveled to New York with a suitcase of slides and prints to meet with Museum of Modern Art (MoMA) curator John Szarkowski. This visit eventually yielded a controversial but revolutionary exhibition in 1976—one of MoMA’s earliest solo shows devoted to color photographs—and a classic accompanying book, William Eggleston’s Guide. At this point in his career, Eggleston had already distinguished himself by treating color as a means of discovery and expression, and as a way to highlight aspects of life hidden in plain sight.

Internationally acclaimed, Eggleston has spent the past four decades photographing around the world, responding intuitively to fleeting configurations of cultural signs and specific expressions of local color. He has been commissioned for projects that range from the orange groves of the Transvaal to the studio lots of Hollywood to the streets of Kyoto.

William Eggleston: Democratic Camera—Photographs and Video, 1961–2008 is organized by the Whitney Museum of American Art, New York, in association with Haus der Kunst in Munich, Germany. The exhibition is co-curated by Elisabeth Sussman, Sondra Gilman curator of photography at the Whitney Museum of American Art, and Thomas Weski, former deputy director of Haus der Kunst in Munich, now professor of the study of curatorial cultures at the Academy of Visual Arts, Leipzig.

The exhibition is accompanied by an illustrated catalogue that provides new insight into the artist’s influence on generations of American artists, filmmakers, writers, and public perceptions of art. Available at LACMA’s stores, the book is published by the Whitney Museum of American Art and distributed by Yale University Press.

Margolles has created a series of six custom-made concrete benches to be exhibited near the north piazza of the BP Grand Entrance at LACMA for LAND's exhibition VIA/Stage 2. The cement used to construct these benches has been mixed with a liquid that was used to clean corpses in an autopsy room in Mexico—four gruesome fatalities, all products of drug- and gang-related violence. These functional benches, intended for use by museum visitors, take the form of an abstracted human body lying prone on the ground.

Margolles has used this format previously, presenting a set of six benches at Jardin Botánico Culiacán, in Culiacán, Mexico, intended as monuments to the dead where spectators might find peace in the tragedies. The new works at LACMA, on the other hand, function as what the artist describes as "perfect embodiments of the spirit of evil," asking those that might engage with them to feel the overwhelming energy of aggression that produced the infused material. However, the elegant, minimal aesthetic of the work, their placement (per the artist's request) in a beautiful, outdoor space, and their value as a place of rest and contemplation for a passing viewer suggest the possibility for brutality and poetry to coexist.

Teresa Margolles was born in Culiacán, Mexico, where she studied art, communication sciences, and received a diploma in forensic medicine from the Servicio Médico Forense. Her practice involves the development of social and conceptual artistic strategies on the basis of the use of bodily substances and images of corpses. Margolles's work has increasingly been exhibited in different venues around the world, and she was the official representative of Mexico at the 53rd International Art Exhibition, la Biennale di Venezia (2009).

LAND is a public art initiative committed to curating site- and situation-specific contemporary art project, in Los Angeles and beyond. For more information http://www.nomadicdivision.org

This exhibition courtesy of Jardin Botánico Culiacán & CIAC. This exhibition is part of VIA, a year-long, multi-site exhibition, organized by the Los Angeles Nomadic Division (LAND) and presented throughout Los Angeles, featuring a suite of temporary, public projects by contemporary artists from Mexico.