In 2010, Plug In Institute of Contemporary Art will open the doors on a powerfully-inclusive new centre for contemporary art in the heart of downtown Winnipeg. There will be the opening of four exhibitions: new paintings by Eleanor Bond; A Mystery Play, a film installation by Shezad Dawood; a performance and installation that are a culmination of 4 years of works of Lori Blondeau and Adrian Stimson; a new series of life- size self-portraits, over-sized silkscreen prints based on a collaborative project by AA Bronson. 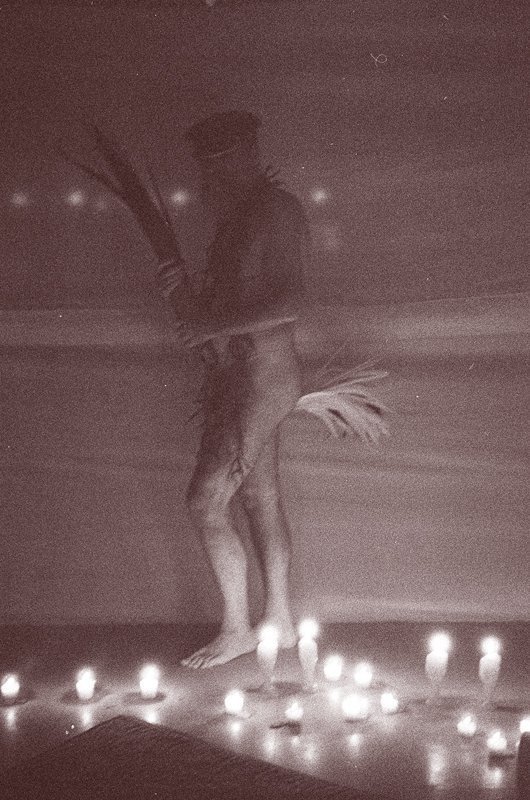 Curated by Helga Pakassar, organized by Plug In ICA

As part of our grand opening event on Saturday, November 6, 2010, Plug In ICA presents “Mountain of Shame”.

This exhibition premieres a remarkable new body of work by distinguished Winnipeg artist Eleanor Bond. The paintings and sculptures in “Mountain of Shame” offer reﬂections on the enigmas and complexities of existence through the (im)materiality of painting. Full of rich and lurid colours, these works evoke the fantastical, while still referencing familiar built and natural worlds. One monumental-scaled painting is a collage of mutating forms and energies that calls to mind diverse phenomena: brain activity, electronic data, biomorphic forces, bodily interiors and weather events. The psycho- spatial ﬁelds of these works suggest a type of cognitive mapping of indeterminate places and situations. They are of nowhere and everywhere at the same time, even if titled as speciﬁc locations. Moving away from the journalistic content of earlier images, here ideas about the unknowable are generated through a synaesthetic experience. Bond exploits the materiality of paint using techniques ranging from protruding accretions to atmospheric transparencies in a way that emphasizes the phenomenology of apprehension. As responses to an often catastrophic and over-stimulated world, her works can be seen as projections of the processes of making sense of such conditions. The scope of works in this exhibition, from a spatially baroque spectacle to quiet interiors and a diminutive “Mountain of Shame,” substantiate the range and depth of Eleanor Bond’s inquiries.

Eleanor Bond has exhibited widely since the mid -1980s with solo exhibitions across Canada and internationally, including the Contemporary Art Gallery in Vancouver, Witte de With in Rotterdam and the Museo de Arte Moderna de Sao Paulo in Brazil. The Musee d’art contemporain de Montreal in 1998, the Winnipeg Art Gallery in 1990 and Gallery 1.1.1 at the University of Manitoba in 1989, have produced touring solo exhibitions and catalogues. Her work has been included in major exhibitions at the Montreal Biennale, Third International Istanbul Biennial, Barbican Art Gallery in London, National Gallery of Canada and the Sao Paulo Biennial. Her art is in major collections and has been featured in many publications. She is Associate Professor in Studio Arts at Concordia University in Montreal. This touring exhibition will be accompanied by a publication on Bond’s practice.

As part of our grand opening event on Saturday, November 6, 2010, Plug In ICA presents “A Mystery Play” - a project by Shezad Dawood, commissioned for Plug In, featuring a newly commissioned score by Michael G Mills, the Wyoming-born composer who has been a former composer-in-residence with both the London Philharmonic and the Deal music festival. The ﬁlm installation was produced in Winnipeg as part of Plug-In’s annual Summer Institute in 2010.

For “A Mystery Play”, Dawood reprises his interest in Buster Keaton as well as his connection to Harry Houdini, via the Vaudeville Circuit of the 1920s, which coincidentally included Winnipeg, with both performers having performed at the Pantages Playhouse, which is still in use as the Playhouse Theatre. The new work was staged and ﬁlmed between the Playhouse, the Manitoba Legislative Building, the Winnipeg Zoo’s lion cage, and various outdoor locations. Drawing on research into the Masonic symbolism inherent in the Legislative Building, parallel ideas of magic, or visual sleight-of-hand encompassed in the work of both Keaton and Houdini, the ﬁlm also maps out various other histories and narratives contained within Winnipeg and Canada. Historic ﬁgures are introduced, for example, Mademoiselle Adgie, the burlesque dancer who performed with lions for the opening gala of the Pantages Playhouse and Canadian magician, Dai Vernon, known as “the man who fooled Houdini.”

The ﬁlm itself is an atmospheric black and white short, of thirteen minutes in length, with the action (a lyrical interweaving of the plausible connections between the various characters and the city), intercut with the various stages of initiation incorporated into the architecture of the Legislative Building. The ﬁlm builds to a ﬁnal climactic scene, restaging one of the key stunts from Keaton’s classic 1928 Steamboat Bill Jr., where a house appears to spiral down to the ground in a storm, and Keaton steps through the door, thus bringing together the strands of architecture and screen magic.

Shezad Dawood was born in London in 1974 and trained at Central St Martin’s and the Royal College of Art before undertaking a PhD at Leeds Metropolitan University. Dawood works across many different forms of media, and much of his practice involves curating and collaboration, frequently working with other artists to build on and create unique networks of critically engaged discursive circles. His collaborative Feature ﬁlm (2008) relocated the action of a traditional western to the English country-side, slipping into other sub-genres such as the zombie-ﬂick, and Wagnerian opera (and features cameos from artists Jimmie Durham and David Medalla). Insha’allah 2009 restaged Beckett within Islamic immigrant communities in Milan. Dawood’s work has been exhibited internationally. He currently lives and works in London, where he is Senior Lecturer and Research Fellow in Experimental Media at the University of Westminster.

One day the wind signaled a fate beyond all comprehension. Buffalo Boy had been thrown into the gut of the consumer world where he became an attraction, another other for all to see. Buffalo Boy knew that he had to break free and come out of the shadows of fringe and feathers. He began his mantra, “If I could turn back time and beat the crap out of Custer again and again, I would.” As he clicked his heels and repeated “If I could turn back time, if I could turn back time…” a rainbow appeared and there stood Belle Sauvage. The powers of the universe brought them together and they knew instantly that they would put the WILD back into the west.

As part of our grand opening event on Saturday, November 6, 2010, Plug In ICA presents “Putting the WILD Back into the West: Buffalo Boy and Belle Sauvage (2006-2010)”. This performance and installation will be the culmination of four years of performance installations by Lori Blondeau and Adrian Stimson and the very last presentation of this series. DJ Co-op will provide a blend of country and dance music throughout the evening.

Through their wild-western alter-egos, Buffalo Boy and Belle Sauvage, Blondeau and Stimson adapt stereotypical themes from a now distant era of vaudeville, saloons and gun ﬁghts, setting the stage for a contemporary rewriting of history, encouraging the audience to participate in creating a photographic record of an alternative aboriginal account. A diorama is presented, for people to photograph themselves in colonial costuming, as well as a wall of photos of previous Belle and Buffalo Boy enactments. The public is invited to bring their own cameras to photograph themselves and friends in the costumes provided, or to wear their own costumes to the opening reception on November 6. Doors open at 7:00 p.m.

Lori Blondeau is a Cree/Saulteaux/Métis artist and curator based in Saskatoon. She is a co-founder and the current director of TRIBE, one of Canada’s most innovative and exciting Aboriginal arts organizations. Blondeau’s performance, photo, and media-based work has been presented nationally and internation- ally. She is currently completing a PhD in Interdisciplinary Studies at the University of Saskatchewan.

Adrian A. Stimson is a member of the Siksika (Blackfoot) Nation in southern Alberta and is a Saskatoon-based inter- disciplinary artist. He has exhibited and performed nationally, and is a sessional instructor at the University of Saskatch- ewan. His research has included identity, metaphysics, two spirit people, ecology, spirit and healing modalities within artistic practice. Adrian was awarded the Queen Elizabeth II Golden Jubilee Medal in 2003 and the Alberta Centennial Medal in 2005 for his human rights and diversity activism in various communities.

As part of our grand opening event on Saturday, November 6, 2010, Plug In ICA and AA Bronson present a new series of life- size self-portraits, over-sized silkscreen prints based on his collaborative project “Invocation of the Queer Spirits.”

The work refers to the Joseph Beuys self- portrait of 1972, “La rivoluzione siamo Noi.” Like Beuys, Bronson inhabits the multiple personaes of artist, educator, activist, and shaman to challenge the dominance of the marketplace in a consumerist society. Inﬂuenced in the late 60s by Beuys’ prodigious output of low-cost multiples and his performative and often collaborative approach to making art, AA Bronson went on to found General Idea with his collaborators Felix Partz and Jorge Zontal in 1969. They worked and lived together for 25 years until his partners’ death in 1994. Bronson now lives in New York City, where he is the President of Printed Matter, Inc. and the Artistic Director of the Institute for Art, Religion and Social Justice at Union Theological Seminary.

Between 2006 and 2009, AA Bronson collaborated with artist and academic Peter Hobbs on the project “Invocation of the Queer Spirits,” a series of ﬁve “performances” in ﬁve cities, in which a group of gay men gathered in a secret location at an unannounced time without documentation or an audience. The rituals that resulted are evoked, and invoked, in Plug In ICA’s new book, “Queer Spirits,” Bronson and Hobbs’ diaristic and imagistic exploration of the project co-published with Creative Time, New York. Together they explored the various social forms of group therapy, ceremonial magic, the sweat lodge, witch’s covens, gay heart circles, and 19th century spiritualist séances to create the queer hybrid they entitled “Invocation of the Queer Spirits.” The fourth of these was commissioned by Plug In, and was held in the abandoned United Army Surplus store in its last days, before it was torn down to make room for the new building that houses Plug In today.

“We are the revolution” presents an image of Bronson photographed by Winnipeg ﬁlm-maker and Plug In President Noam Gonick moments before the performance began. The prints are applied with various materials such as diamond dust, graphite, and crushed leaves.

The portraits are presented in Plug In ICA’s new galleries, so that Bronson is in fact standing in almost the exact location where the photograph was originally taken.


Established in 1972, Plug-In Institute of Contemporary Art (Plug In ICA) is a centre for the presentation of art that confronts ideas and issues affecting contemporary society. Plug In seeks to engage visitors from all walks of life through award-winning exhibitions, publications, public programs, and professional development opportunities. Plug In ICA continues to evolve and build upon its role as a research institution, and proximity to the university campus will enhance research activities.

To foster the professional development of artists, every year Plug In hosts a Summer Institute, an artist's residency/art school program. During this program, artists work on Plug In's premises, transforming the exhibition studio into an artists' studio.

460 is conceived as actively participating in its environs while also allowing the city to be brought inside. A shortcut enables pedestrians to pass through the building without actually entering. This portal is programmed as a gallery space that will expose passers-by to the gallery's featured exhibits. A unique four storey interior space links the multiple occupants of the building in a manner that is both social and yet elusive, allowing simultaneous glimpses of goings on in disparate parts of the building. The process of revealing prepares the visitor for the building's other curiosities such as a rooftop terrace space that will permanently feature a new installation by Dan Graham. The overall architectural aim has therefore been to favour the experiential dimension rather than the formal qualities of the building as object.