Nico Vascellari was invited by Marcello Smarrelli to design an art intervention in the framework of the ARTools project, for the sculpture wood of the Centre. The installation consists of a 60 minutes long tape loop obtained by assembling together pieces of all the tapes of his collection, from his childhood till now. The over 70 meters long tape is extended into the forest of Vassiviere and played by a tape recorder. 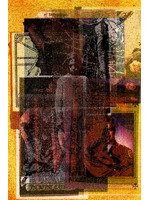 Nico Vascellari was invited by Marcello Smarrelli to design an art intervention in the framework of the ARTools project, for the sculpture wood of the Centre international d’art et du paysage on Vassivière island. The Ile de Vassivière forest proved to be an environment particularly well-suited to Nico Vascellari's artistic approach.

The work he is presenting is made up of two elements linked conceptually by the idea of memory, the archive, and the metamorphosis of sedimented data. Two tape recorders play a long loop of amplified sound, made up of a single magnetic tape obtained by joining together all the audio cassettes the artist has ever owned and listened to since his childhood. The tape winds its way through the forest surrounding the Art Center, travelling up the trunks of the trees, with one of the tape recorders on REC and the other on PLAY.

The device was designed in such a way that the sound traces are never completely erased. The tape continues recording what is going on outside, in the natural world, and adds the sounds of the Vassivière forest to the original soundtrack. Over time, the original sound traces will be lost, but not before they have been overlaid with other sounds, in successive strata, as though the tape were the living memory of some geological upheaval.

The pre-recorded sound loop will be constantly changing, and with time the sound traces of the audio cassettes will give way to a spontaneously created new soundtrack, dictated by chance. Nico Vascellari's second art intervention comprises aluminium plates on which the covers of the audio cassettes are printed in color, using a photosensitive process.

These impressions, left to weather under the skies of Vassivière, will gradually transform into fogged, barely recognizable color images. Like the sounds on the tape, the original signs on the aluminium plates will not be destroyed, but instead they will be altered, blended with others in the course of a slow process of adaptation to their immediate environment. Once again, the process they undergo resembles the operations of memory.

Nico Vascellari's background is in the underground music scene, where he was front man on the noise band "With Love", an experiment he returned to in his project Lago Morto (Dead Lake), created for the Graz Kunsthalle in 2009. His work combines elements from underground culture and from the visual arts; he uses a range of media - photography, video and sculpture -, while performance holds the key to his work. Many different elements are employed in his art, including fabrics, objects in daily use or consecrated by tradition, lighting effects and new generation technology.

In Nico Vascellari's practice, it is the tribal, collective dimension and the search for a totalizing experience which are central. The spaces in which he performs take on a particular density and become physically engrossing: they resonate with the artist's talent for improvisation, and his way of interacting with the audience, which plays an key role. Additionally, his performances are always inspired by his personal experience. They can be seen as the translation into the public sphere of personal situations, gestures and quotations, using layers of multicultural references in which the grotesque, the baroque and the everyday are brought together.

ARTools
From may 2010 to december 2011, the Centre international d’art et du paysage de l’île de Vassivière realizes with three europeans institutions, the GAMeC at Bergame (Italy), the Malmö Konsthall at Malmö (Sweden), the Mücsarnok Kunsthalle at Budapest (Hungary), an international project for a propspective pedagogy of art, linked to a new network, the ARTools network. The basic idea of the project is about education in arts as a fundamental tool for understanding the changes in modern and contemporary society. In this spirit, the actions are structured to develop a rich and diverse process that can communicate with different audiences.