Through more than one hundred works by 60 artists, this exhibit examines myriad ways in which photographic imagery has been incorporated into recent artistic practices. The show, which occupies the entire second floor of the museum, includes photographs, paintings, videos, films and installations created from the 1960s to the present by leading artists such as Marina Abramovic, Sophie Calle, Richard Prince, Robert Rauschenberg, Cindy Sherman, Hiroshi Sugimoto and Andy Warhol, Christian Boltanski, Anna Gaskell, Pierre Huyghe, Philippe Parreno, Gerhard Richter, Lorna Simpson and Jeff Wall, among others. 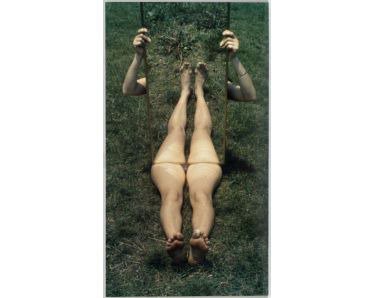 Through more than one hundred works by 60 artists, this exhibit examines myriad ways in which photographic imagery has been incorporated into recent artistic practices

The exhibition, which occupies the entire second floor of the museum, includes photographs, paintings, videos, films and installations created from the 1960s to the present by leading artists such as Marina Abramović, Sophie Calle, Richard Prince, Robert Rauschenberg, Cindy Sherman, Hiroshi Sugimoto and Andy Warhol.

In Bilbao the show will feature more than sixty new works not included in the New York exhibition by internationally renowned artists such as Christian Boltanski, Anna Gaskell, Pierre Huyghe, Philippe Parreno, Gerhard Richter, Lorna Simpson and Jeff Wall, among others.

From November 6, 2010, until March 13, 2011, the Guggenheim Museum Bilbao will host Haunted: Contemporary Photography/Video/ Performance, an exhibition featuring over one hundred works by sixty different artists who examine myriad ways in which photographic imagery is incorporated into recent art, with the aim of underscoring the unique power of recording technologies and documenting a widespread contemporary obsession with accessing the past, both collective and individual.

The exhibition was on display at the Solomon R. Guggenheim Museum in New York until September 6 of this year, where it met with great success. In Bilbao, sixty new works will be included alongside selections from the initial presentation, some of which have never been exhibited in Spain before.

Much of contemporary photography and video seems haunted by the past, by the history of art, by apparitions that are reanimated in recording technologies, live performance and the virtual world. By using dated, passé or quasi-extinct stylistic devices, subject matters and technologies, such art embodies a melancholic longing for an otherwise unrecoverable past.

With a particular emphasis on photography, but also including other forms of artistic expression such as painting, video, film, performance and installation art from the 1960s to the present day, Haunted is co- curated by Jennifer Blessing, Curator of Photography, and Nat Trotman, Associate Curator, both from the Solomon R. Guggenheim Museum in New York, and reveals the extraordinary quality of the photographic and new media works in the Guggenheim Collections.

The exhibition at the Guggenheim Museum Bilbao will feature recent acquisitions made by the Solomon R. Guggenheim Foundation, including works by Marina Abramović, Sophie Calle, Tacita Dean, Gregory Crewdson, Thomas Demand, Roni Horn, Christian Marclay, Richard Prince, Cindy Sherman, Hiroshi Sugimoto and Jeff Wall. It will also include artworks created in the 1960s and 70s by artists such as Andy Warhol, Bernd and Hilla Becher, Joan Jonas, Robert Rauschenberg, Martha Rosler and Robert Smithson, which represent the incorporation of photographic images in contemporary art on a massive scale and will help put more recent works in context.

Finally, a significant part of the show will be dedicated to works created after 2001 by young artists such as Walead Beshty, Anne Collier, Rachel Harrison, and Idris Khan, as well as others not included in the New York exhibition: the American artists Slater Bradley, Lucinda Devlin, Lia Halloran, Matt Keegan, Ryan McGinley, Lisa Oppenheim, Aida Ruilova, and Lorna Simpson; Carlos Garaicoa from Cuba; Diego Perrone from Italy; the Australian artist Tracey Moffatt; and the Lebanese artist Walid Raad.

One of the artists who will have an expanded presence in Bilbao is Ana Mendieta, the Cuban-American exponent of performance art, Body Art and Land Art who died tragically at the age of 36 in New York, with six representative selections from her body of work that have never been exhibited before at the Guggenheim Museum Bilbao. Additionally, the Bilbao presentation will feature a pair of major video installations by the famed artists Pierre Huyghe and Philippe Parreno. Huyghe’s 1998 piece entitled Sleeptalking (with Sleep by Andy Warhol and the voice of John Giorno) (1998/2010) and Parreno’s El Sueño de una Cosa (2001) will be exhibited for the first time ever at any Guggenheim museum.

The Guggenheim Museum Bilbao will also become the temporary home of Jeff Wall’s suite of four photographs commissioned in 2007 by Deutsche Bank AG for the Deutsche Guggenheim, Berlin. Three of these new photographs adopt Wall’s unique cinematographic approach, with compositions that realistically depict people in familiar circumstances, and the fourth is a documentary image of an empty warehouse.

Haunted: Contemporary Photography/Video/Performance, which occupies the second floor of the museum, is divided into five formal and conceptual categories which reflect the different ways in which the participating artists choose to understand and address the past: Appropriation and the Archive; Death, Publicity and Politics; Documentation and Reiteration; Landscape, Architecture and the Passage of Time; and Trauma and the Uncanny.

Some works incorporate stylistic devices and subject matters that seem dated, passé or quasi-extinct; others capture traumatic moments of the historical past; some are recreations of previous works, creating the sensation that they are pursued by a lost or distant original; there are ghostly images and morbid symbols of the past as ruins and apocalyptic landscapes; and, finally, there are creations that analyze the role that archives play in collective memory and personal obsession.

Appropriation and the Archive

In the early 1960s, Robert Rauschenberg and Andy Warhol began to incorporate photographic images into their paintings and, in so doing, they established a new mode of visual production not based on the then-dominant concept of gestural abstraction but on mechanical processes such as screen-printing. In this way, they challenged the notion of art as the expression of a singular, heroic author, instead conceiving the artwork as a repository for autobiographical, cultural and historical information. In the years that followed, a number of artists, including Bernd and Hilla Becher, Christian Boltanski, Richard Prince, Sarah Charlesworth and Sherrie Levine, have pursued this archival impulse, amassing fragments of reality either by creating new photographs or by appropriating existing ones.

When Warhol created his silkscreen paintings of Marilyn Monroe in the wake of her death, he touched on the darker side of a burgeoning media culture that, during the Vietnam War, became an integral part of everyday life. Today, with vastly expanded channels for the propagation and reproduction of images, events as varied as the terrorist attack on the World Trade Center and the deaths of celebrities such as Princess Diana and Michael Jackson have the capability of becoming traumatic on a global scale. As this new cultural condition has taken hold, many artists, including Rachel Harrison, Adam Helms, Nate Lowman, Adam McEwen, Cady Noland, Walid Raad and Rosangela Rennó, have reexamined the strategies of image appropriation that Warhol pioneered, attending closely to the ways in which political conflict can take on global significance.

Since the early 1970s, photographic documentation, including film and video, has played an important role in the art of creating live performances, often dictating the conditions in which performances were staged and sometimes obviating the need for a live audience altogether. Despite the ephemeral nature of performance pieces, artists have documented them in an attempt to communicate the meaning of their work. For many artists, these documents took on the function of relics – objects whose meaning is deeply bound to an experience that is always already lost in the past. The works of artists such as Marina Abramović, Sophie Calle, Tacita Dean, Joan Jonas, Christian Marclay, Annette Messager, Ana Mendieta and Zhang Huan examine the various aesthetic approaches inspired by the reiterative power of photography, which they used not only to restage their own (and others’) performances, but also to revisit the bodily experience of historical events. These artists have reconsidered the document itself as an object steeped in history, with a particular focus on its material specificity.

Landscape, Architecture and the Passage of Time

One of photography’s primary historical functions has been to record sites where significant and often traumatic events have taken place. During the United States’ Civil War, which broke out shortly after photography was invented, a new generation of reporters sought to photograph battles, but due to the long exposures required at the time, they could only capture the aftermath of the conflict. The resulting landscapes strewn with the dead today seem doubly arresting, for they capture past spaces where something has already happened. This belatedness, witnessed in the medium’s infancy, speaks to the very nature of a photograph, which has physical and chemical bonds to a past that disappears as soon as it is created. As viewers, we are left only with traces from which we hope to reconstruct the absent occurrences in the fields, forests, homes and offices we see. With this condition in mind, artists such as Clemente Bernad, James Casebere, Spencer Finch, Carlos Garaicoa, Ori Gersht, Roni Horn, Sally Mann and Hiroshi Sugimoto have turned to empty spaces in landscape and architecture, creating poetic reflections on the inexorable passage of time and insisting on the importance of remembrance and memorialization.

Trauma and the Uncanny

Photography has not only profoundly impacted our understanding of history; it has altered – or, as some theorists argue, completely reconfigured – our sense of personal memory. From birth to death, all aspects of our lives are reconstituted as images alongside our firsthand experiences of them. This repetition, which is mirrored in the technology of the photographic medium, produces an alternate reality in representation that, particularly when coping with traumatic events, can take on the force of the uncanny. Artists like Gregory Crewdson, Anna Gaskell, Karl Haendel, Jeff Wall and Gillian Wearing exploit this effect, constructing fictional scenarios in which the pains and pleasures of personal experience return with eerie and foreboding qualities.

The book published on the occasion of this presentation, with texts by exhibition curators Jennifer Blessing and Nat Trotman, and essays by Peggy Phelan, Lisa Saltzman, and Nancy Spector, covers the different ways in which photography has been incorporated into recent art practices and deals with topics such as the passage of time and images, the effect of photography, or memory and commemoration.