The Back Story. Through five separate sections, each comprising a large work and supporting material, the exhibition examines the artist's preoccupation with looking beyond the surface of the visual image by exploring the story behind the work, its position within the classification of art, or the highlighting of calligraphy and patterns. 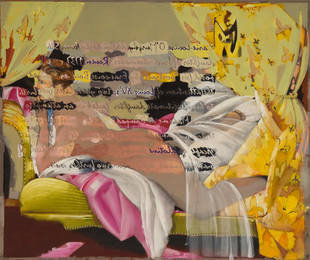 This November, the Royal Academy of Arts will present Artists’ Laboratory 02, featuring the recent work of Stephen Farthing RA. The exhibition will display a selection of drawings and large scale paintings, made since 2005, all of which examine the artist’s preoccupation with looking beyond the surface of the visual image by exploring the story behind the work.

Farthing has mixed writing, painting and drawing in varying proportions to produce a sequence of works that take aspects of the history of painting as their subject matter with a view towards better understanding how words and images can work together. Many of the drawings in this exhibition started life as a creative response to the work he carried out as executive editor of 1001 Paintings You Should See Before You Die. Farthing said ‘I decided to set the acquired knowledge of working in the studio, to turn what were masses of facts into something useful to me as an artist’.

Divided into five sections, the exhibition begins with Farthing’s Drawn History of Painting, a series of pen and ink drawings that consider the history of painting from the Valley of the Kings to the White Cube. Framed in pairs, one drawing outlines the main elements of the painting while the other pin points the work from an art historical perspective.

Painting the Atlantic is based on the journey frequently made by the artist between his studios in London and New York State. The painting is on a huge scale and the related drawings are studies in the details of the waves and are calligraphic in form.

A lone women situated in an imagined state of perfect harmony is the subject of the section Standing Lady. As examined in the related drawings, the objects around her form a unique pattern and serve to elevate her into a sublime state.

Finally, The Abacus series looks at the coming together of image and text. The counting system has references to the world of finance and recent collapse of the markets.

Works in the exhibition will be for sale.

BIOGRAPHY
Born in London in 1950, Stephen Farthing studied at St Martin’s School of Art before taking his Masters Degree in Painting at the Royal College of Art where he received an Abbey Major Scholarship, taking him to The British School at Rome in 1976.
His extensive teaching career began as a Lecturer in Painting at Canterbury College of Art after which he was a Tutor in painting at the Royal College of Art. He went on to become Head of Painting and Head of Department of Fine Art at West Surrey College of Art and Design. From 1990 he was Ruskin Master at the Ruskin School of Fine Art and Professorial Fellow of St Edmund Hall, Oxford until 2000, when he moved to New York in order to take the position of Executive Director of The New York Academy of Art, Manhattan. In 2004 he was appointed as the Rootstein Hopkins Research Professor in Drawing at the University of the Arts, London.
Stephen Farthing has exhibited extensively since his first solo exhibition at the Royal College of Art Gallery, London in 1977. His work, representing Britain, was shown at the Sao Paulo Biennale in 1989, leading to many further international solo shows.
Farthing was elected Royal Academician in the category of Painting 1998 and in 2000 was made an Emeritus Fellow of St Edmund Hall, Oxford. He lives and works in New York.

ARTISTS’ LABORATORY
The Artists’ Laboratory is a new programme of exhibitions at the Royal Academy of Arts. The programme gives its’ contemporary Royal Academicians the opportunity to take risks and explore new ideas within their artistic practice and is a chance for the public to experience less familiar aspects of their work. The exhibition underpins the Royal Academy’s unique position in having artists at its core. Artists' Laboratory 03 will take place in Autumn 2011.

This exhibition has been devised by a committee of Royal Academicians and curated by Paul Huxley RA together with Kathleen Soriano, Director of Exhibitions and Edith Devaney, Head of Membership and Summer Exhibition, Royal Academy of Arts.

The Royal Academy will publish a 48-page book to accompany the exhibition, including an essay by the distinguished Yale scholar David Scott Kastan and a conversation between Stephen Farthing and the artist Stephen Chambers RA. The book is also published in a limited edition of 25 copies, each of which includes a print, signed and numbered by Farthing.