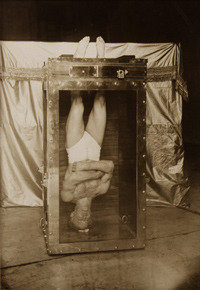 Through impossibly daring feats Harry Houdini (1874-1926) captivated audiences worldwide, and his legendary escapes instill awe to this day. In this first exhibition in a major American art museum on the master magician and his lasting influence in visual culture, Houdini: Art and Magic features magic apparatus, posters, broadsides, period photographs, archival films, and contemporary art work inspired by the great magician and escape artist. The exhibition reveals how Houdini's reputation has evolved over time, and how the edgy performances and physical audacity which caused fear, excitement, and apprehension in his audiences at the turn of the twentieth century continue to inspire twenty-first century vanguard artists such as Matthew Barney, Petah Coyne, Jane Hammond, Vik Muniz, Deborah Oropallo, and Raymond Pettibon.

Born Ehrich Weiss, Houdini was known to observers as someone who could not only escape from straitjackets, water tanks, milk cans and handcuffs, but as an individual who threw off his background, making an immigrant’s getaway from Budapest to Appleton, Wisconsin to New York and the international stage. His celebrity and the metaphor of escape have rightly become significant chapters in the Houdini storyline in biographies and biopics. This message is similarly carried in the late-nineteenth- and early-twentieth-century posters, photographs, and film footage from Houdini’s day. But following his death in Detroit on Halloween in 1926, when Houdini could no longer control that narrative, contemporary culture took hold. After popular culture held sway at mid-twentieth century, by the 1970s contemporary artists rescued his impaired mythic status, reviving Houdini’s origins of brute prowess and edgy performance. What the visual culture from Houdini’s lifetime and after reveal is how the interpretation of a famous individual develops and is manipulated over several generations.

Houdini—the world-famous magician and escape artist, consummate showman, American superhero, and anti-Spiritualist crusader—found the bright lure of the big stage greater than the austere pulpit of his father’s rabbinic profession. Houdini lived for only fifty-two years, but his significance as a Jew who made it into the mainstream, as a popular phenomenon who attracted huge crowds, and as a muse for artists working today is extraordinary. In his day, he astonished audiences by breaking out of impossible enclosures and breaking into entertainment culture. Houdini’s ambition emerged from an American archetype: ingenuity, modernity, and renewal conspired in his favor. He became a living legend for American presidents, for Hollywood stars, for fiction writers, and for masses of spectators who crowded his outdoor and theater performances. Nonetheless, Houdini’s celebrity was not without contradictions which he faced and cultivated throughout his life and career. His role as an American icon was transformed across three centuries, first in the late nineteenth century by Houdini’s own interpretation of his status, next by twentieth-century popular culture, and today by contemporary artists who conjure Houdini as an audacious performer and showman of raw physicality.