Heisenberg's Snapshots. The exhibition features a new series of photographs that the artist did not take with his camera. Neither did he conceive them. The artist discovered these images among peopleis snapshots in a state-of-the art industrial photo-printer owned by a commercial lab in Rome. 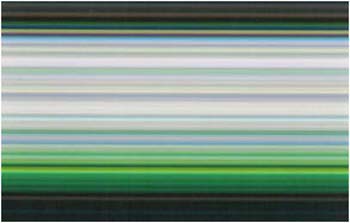 From October 3 through November 2, M.Y. Art Prospects presents a solo exhibition by Mario Santoro-Woith. A reception for the artist will be held on Thursday, October 3, 6 - 8 pm.

The exhibition features a new series of photographs that the artist did not take with his camera. Neither did he conceive them. Mario Santoro-Woith discovered these images among peopleÃ­s snapshots in a state-of-the art industrial photo-printer owned by a commercial lab in Rome. As the lab technician struggled with this randomly occurring error, the beauty and untraceable origins of these prints struck the artist.

"The artist named these "erroneous"photographs "HeisenbergÃ­s Snapshots" after the Nobel Prize-winning physicist known for his "Uncertainty Principle" theory, which argues that there is an area outside the rational and explainable, a zone that proves crucial when studying very small particles such as atoms and their nuclei.

The significance of "HeisenbergÃ­s Snapshots" lies not only in their beauty-created-by-chance, but also on their challenge to the very idea of what constitutes photography itself. PhotographyÃ­s artistic value has been debated ever since its invention. A photographerÃ­s creativity is not always determined by the fact that he or she chooses an image and takes it with his or her camera. According to Santoro-Woith, "great photographers like Ugo Mulas always leave an area of 'unexplored effects' open to interpretation. Or, as photographer Garry Winogrand once put it, photograph 'is a way of living, not about taking pictures.'"

Through this new discovery, Santoro-Woith explores his long-time interest in the relationship between fine art photography and photography as a record of everyday events. "Those who are truly creative never miss the fleeting moment, the thing they thought, they saw, or felt. Harnessing the unknown, "says the artist. In recognizing the creative process of a machine, Santoro-Woithopens his mind to the expanded possibilities of fine art photography.

Along with these non-duplicable snapshots, this exhibition also includes an earlier series of color abstract photography by the artist, the subjects of which are everyday materials and environments.

Born in 1968, Mario Santoro-Woith began photographing still-life compositions at the age of fourteen. He earned advanced degrees in visual anthropology at universities in Rome and Munich, while also working at Studio Galletti, a well-known photographic studio in Rome. In the early 1990s, Santoro-Woith traveled for diverse humanitarian organizations to document emergency situations in Angola, the former Yugoslavia, Uganda, the Philippines and Peru. In the following years, Santoro has worked and exhibited in the field of experimental photography, gaining widespread recognition. His solo exhibitions have included a prestigious show at the MusÃ©e de lâ€™ElysÃ©e in Lausanne, Switzerland (1998). M.Y. Art Prospects has presented Santoro-Woith's work at Kunst Koln (2000) and Art Miami (2001).