A presentation of Myriam and Guy Ullens? collection of contemporary Chinese art, a collection which they have been putting together for more than ten years. Different generations of artists will find themselves side by side in a collection where the works cover the various mediums: painting, calligraphy, sculpture, as well as photography, installation, video and performance. There has been no exhibition on such a large scale seen in France. 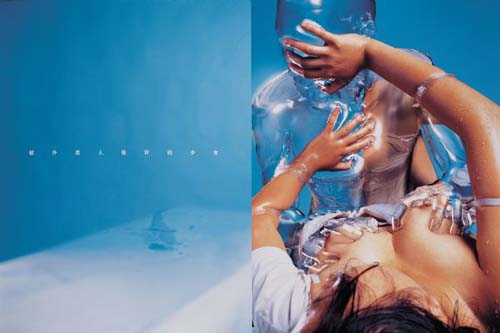 The Paris-Pekin Exhibition, which will be held at the ?Espace Cardin? from the 5 th to the 28 th of October 2002, is a presentation of Myriam and Guy Ullens? collection of contemporary Chinese art, a collection which they have been putting together for more than ten years.

A frequent visitor to China, Guy Ullens was confronted with an early phase of the Chinese avant-garde back in 1987, and has since become one of its most significant collectors in the world.

This exhibition, achieved through private funding, fills a void in the French art scene: to date, there has been no exhibition on such a large scale seen in France.

The range and quality of the artworks will ensure this project to be the outstanding cultural event of the autumn season, and it will be an exciting occasion for the public to discover and experience this extraordinary art.

Different generations of artists will find themselves side by side in a collection where the works cover the various mediums: painting, calligraphy, sculpture, as well as photography, installation, video and performance.

Zhang Xiaogang, with his evocative photo-like portraits of the Cultural Revolution depicting haunted faces and figures linked by delicate red threads is probably the most well known painter in France.

Of the younger generation, Chen Wenbo, bearing witness to a mutant world of virtual hyper-technology with his feminine cybernetic figures, is now also familiar to the French audience.

Sui Jianguo Sui Jianguo will be remembered from the autumn 1999 exhibition "Les Champs de la Sculpture" along the Champs-Elys? where he exhibited "Legacy Mantle", his monumental Chairman Mao double-breasted jacket.

His impressive red-resined dinosaurs, their breasts engraved with the logo ?Made in China?, will be shown for the first time outside of China.

The Photographers
Photography is a realm which is literally coming of age in China : hence the New York ICP?s (International Centre of Photography) decision to dedicate its immense space on the ?Avenue of the Americas? to an enormous retrospective of Chinese contemporary photography next year.

Rong Rong?s photographs of Ma Liuming as a beautiful young androgyne walking nude along the Great Wall of China, and of Zhan Huan?s body covered in a sticky substance to attract flies and insects, are probably the most well known in the performance mould.

The more recent compositions from kitsch artist Wang Qinsong, in which icons of Chinese culture are staged ?pop style? and coloured along the lines of ?Pierre et Gilles?, were acclaimed in Tokyo, New York and Berlin.

The Video-makers
Adozen videos testifying to Chinese creative effervescence in this domain have been selected: amongst these the works of Feng Mengbo, Song Dong, Qiu Zhijie and Wang Jiangwei.

The Calligraphers
Calligraphy has always been a major art in China, one of the ?3 perfections? forming part of a learned Chinese education: poetry, painting and calligraphy.

Indeed, the British Museum of London held an exhibition of Chinese calligraphy in the spring of 2002, following directly in the footsteps of another exhibition ?Power of the Word? dealing with China?s visual culture of the written word, which had toured several American museums.

Contemporary Chinese artists have endeavoured to subvert this ancient art whose rules have evolved over ten centuries, and imbue it with a contemporary sensibility.

This is of special interest, given that the representation of the word, transformed into art, has always gone hand in glove with power in China.

The most inventive and talented artists in this field will be shown: Gu Wenda, Xu Bing, Qiu Zhijie, Fung Mingchip, Wu Shan Zhuan... These artists represent the word, not only through print, but also through performance and video.

This exhibition will feature two extraordinary videos exploring this very transformation-subverting, manipulating, turning inside out the rules of an age-old artistic practice.

Most Chinese art critics agree to date the emergence of the Chinese avant-garde (avant-garde in the sense that exploration and experimentation were the hallmarks of this monumental break from traditional practices) as following on closely from the end of the Cultural Revolution and the death of Chairman Mao in 1976.

Certain events, such as the 1985 "New Wave" exhibition, the 1989 "China Avant-garde" exhibition and the 1993 "China?s New Art Post 1989" show helped define more clearly the clash of artistic undercurrents, and cement them more readily into a continuous history.