KF + CM 4EVER. The second New York solo exhibition by Brooklyn-based artist presents a series of paintings. Ferris balances the mechanical/photographic quality of the sprayed oil paint with hand-painted grounds, wielding the brush and palette knife to carve forms out of the sprayed haze. 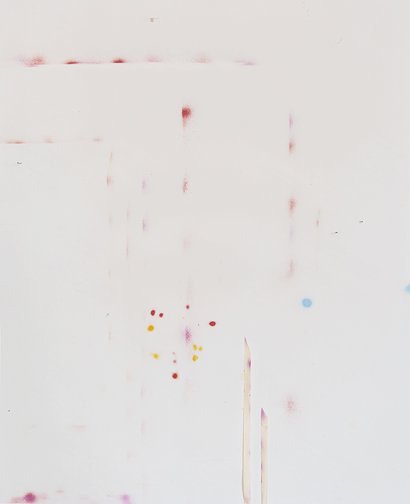 Ferris' large abstract paintings mirror the aggressive vibrations of the city in their intensity of spirit, their layered surfaces, and their angular compositions. Ferris balances the mechanical/photographic quality of the sprayed oil paint with hand-painted grounds, wielding the brush and palette knife to carve forms out of the sprayed haze. In this way, figure and ground tussle with each other for supremacy and create dynamic labyrinth-like pictures. Working forward from a faceted acrylic ground, to an oil pastel latticework, to a final exploding spray-painted blur, Ferris's paintings extend forward as if stepping out of the frame.

While evocative of this city's omnipresent graffiti, airbrushed t-shirts, and American cartoon culture, the paintings draw on the rigor and strength of modernism, from Pollock's hand-thrown paint, to Mondrian's city grids, to create an abstraction emblematic of life here and now in New York City.

Treating each mark like a found material, Ferris builds her work like a bird builds a nest, or a beaver a damn. Each mark remains openly and honestly itself, and of it's material: the spray is not masked, the oil pastel is not blended, and all 48 colors from the box set are used. These lattices create rainbow matrixes and striped textures that mradiate through more transparent marks.

The work is non-verbal, more like noise then language, more akin to flashing lights and potential energies then anything namable. Therefore each painting is titled by a set of punctuation marks, such as (((!!!))) created by the artist to emblematize the emotive, nearly expletive nature of her work. Other titles, as well as the title of the show, allude to bathroom graffiti, notebook valentines, as well asthe ambition of marking a space and marking a future.

Keltie Ferris (b. 1977, Louisville, KY) lives and works in Brooklyn. She received a MFA from Yale University in New Haven, CT and a BFA from Nova Scotia College of Art and Design (NSCAD). In addition to Horton Gallery, she has been featured in exhibitions at the Nerman Museum, Overland Park, KS; Deitch Projects and D’Amelio Terras, both New York, NY; David Castillo, Miami; and Pilar Corrias, London, England. Her work has recently been discussed in The New York Times, Modern Painters, Artforum, and Details, among others. She is the recipient of both a Jacob Javits Fellowship and a Rema Hort Mann Foundation Grant. Her work was the subject of a solo show at the Kemper Museum, Kansas City, MO, for which a publication is available.