New Contemporaries is an important and highly regarded annual initiative that gives art students and recent graduates essential support and recognition at a crucial stage in their development through a high-profile exhibition. Participants are selected by a panel comprised of influential arts figures. Selectors for 2010 are Gabriel Kuri, Mark Leckey and Dawn Mellor. 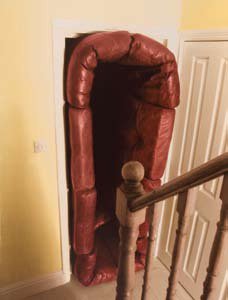 The Institute of Contemporary Arts (ICA) is proud to announce the return of Bloomberg New Contemporaries 2010 this autumn. Featuring the work of 49 artists across a range of media, the exhibition provides a unique opportunity to engage with new practice and ideas from across the UK. In addition, New Contemporaries at the ICA explores a range of initiatives including an expanded programme of accompanying events, screenings, discussions and performances, developed to create a discursive and dynamic context for both artists and audiences.

Participants are selected by a panel comprised of influential arts figures, predominantly artists - often who have themselves previously been a part of New Contemporaries - and through a rigorous process that is open, fair and democratic. The selectors for 2010 are Gabriel Kuri, Mark Leckey and Dawn Mellor.
New Contemporaries was originally presented at the ICA between 1964 and 1989 when a series of highly acclaimed exhibitions aimed to reflect the shape of art to come and offer young artists the chance to exhibit at an organisation associated with radical, bold and experimental art forms.

“The support of emergent talent has always been one of the most important responsibilities for the ICA and we have a long history of presenting debut shows and early exhibitions from some of the most significant and influential artists working today. Our relationship with New Contemporaries goes back to the 1960s when we established regular presentations that continued over a couple of decades. We are delighted now to be working together again and to develop new ways of contextualising the work to enrich the experience for audiences, artists and institution.” — Ekow Eshun, ICA Director

“For New Contemporaries to be once again at the ICA makes perfect sense and it is a thrill for the artists taking part to have their work in a venue with such a rich and vibrant history. Between November and January this year the ICA will be alive with the work of the 49 artists selected for 2010 New Contemporaries and it will be an important moment for emerging art practice and debate in this country.” — Rebecca Heald, Director, New Contemporaries

About New Contemporaries
New Contemporaries gives people still at, or just after, art school the opportunity to show their work in the context of a professional art gallery. It is important in that it takes the work out of the educational context and into the real. The relationship between education and art is known, respected, but strangely not recognised enough. As an organisation, New Contemporaries is totally independent of the art school as it allows applicants a democratic chance for the work itself to shine through. Reputations that might otherwise become set within the art school system are able to break out.

The annual exhibition is selected in two stages. The first stage is virtual, with selections made from jpegs, DVDs and written proposals. At the second stage actual physical works are considered and used to make the final selections. It is important to test, look and judge without knowledge of school, age or background, therefore the selection of selector is key. As a principle it is important to convey a very basic sense of possibility to every art school student or recent graduate considering applying. The selection is made by artists and writers and often a selector will have also been in New Contemporaries, a number of years before. The intense and detailed selection process provides the selector the opportunity to consider art in a broad context, in a visual and aural sea far removed from their individual career.

Although there is no limit put on the number of artists to be shown each year, the number chosen from out of over 1,200 applicants has averaged almost uncannily, at around thirty-five. Independent of place, New Contemporaries is an annual exhibition without a building, and has had beneficial relationships with many important galleries. The exhibition travels and this movement, which is an integral part of the structure, means a different relationship to audience and place. The exhibition provides galleries, such as Cornerhouse, the A Foundation or the ICA, a ready-made exhibition of the very newest and best contemporary art.