The work of JonOne stands out thanks to the uniqueness of his style. This extremely productive artist creates abstract works full of life and energy. This admirer of painters such as Pollock or Kandinsky has inspired himself from popular culture, to create works characterized by excitement and the color movement. 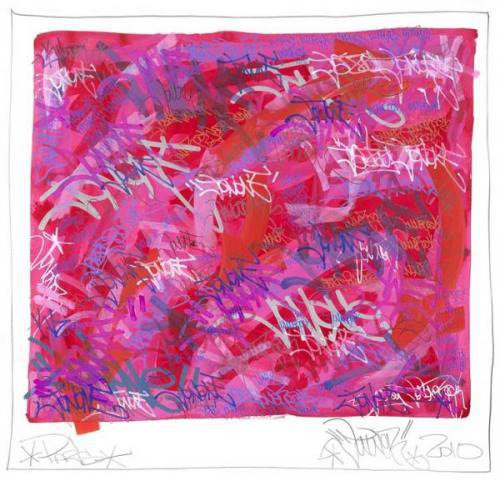 The Magda Danysz Gallery is happy to present the JonOne’s new works, from November 27th till December 24th, 2010. His everlasting support to street art is once again made clear, through this exhibition.Originally from Harlem, JonOne started tagging on the subways of New York when he was seventeen years old. He is a founding member of the bronx born American taggers group 156 crew. The orientation of his style towards abstraction has contributed to making him a well rounded artist and this in a very short span of time.

His artistic qualities, particularly the affluence of his works and his multidisciplinarity, have brought him international fame. He was exposed in the Palais de Tokyo in 2003 and in cities such as Monaco, Brussels, Berlin and New York. JonOne also showed a monumental piece of work in the exhibition Né dans la rue in 2009 in the Cartier foundation for contemporary art and completed art, a unique performance during the Paris Art Fair in March, 2009.The work of JonOne stands out thanks to the uniqueness of his style. This extremely productive artist creates abstract works full of life and energy.

This admirer of memorable painters such as Pollock or Kandinsky has inspired himself from popular culture, to create works characterized by excitement and the color movement. These great works go beyond aestheticism and suggest a message, as the artist says "I wanted to show through my work the anger, the frustration, and the faith inside me when I made them. It is probably the meaning of all these colors ".JonOne has no limits, his painting takes up all the space given to him, his colors are rich and lively, forms get entangled with each other, release themselves, bend then become rigid. He renews his style in each of work. In this exhibition, his work becomes more abstract, he is taking a new direction. He says "motion is the most important thing". JonOne’s work is guided by this and appears rarer and more significant than before. He releases himself by painting. This is what confers to JonOne’s style the particularity of being one of the most personal ones of his generation.

Magda Danysz Gallery
78, rue Amelot - Paris 11
Hours: monday to friday from 11 AM to 7 PM and saturday from 2 PM to 7 PM
free admission