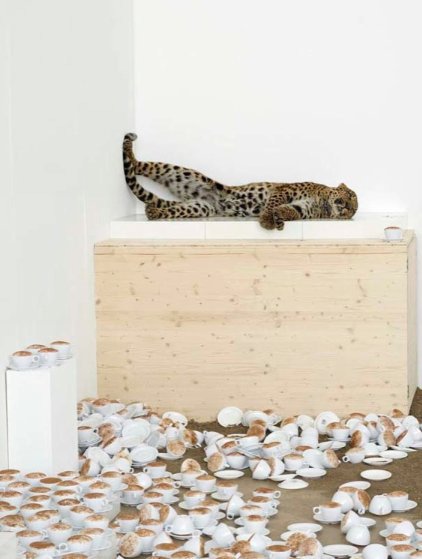 Coinciding with Art Basel/ Miami Beach 2010, Arsham will debut three new bodies of works to include Objects from Antiquity, Push Puppets and Pixel Clouds. The opening reception on November 30th from 6pm to midnight will feature the collaborative performance, RECESS, with choreographer Jonah Bokaer—a tradition at each of his Galerie Emmanuel Perrotin openings.
Straddling the line between art, architecture and performance, Daniel Arsham has worked with Merce Cunningham, Hedi Slimane, Bob Wilson and Jonah Bokaer. He makes architecture do things it's not supposed to do, mining everyday experience for opportunities to confuse and confound our expectations of space and form. Simple yet paradoxical gestures dominate his sculptural work: a façade that appears to billow in the wind, a white cube eroded on all sides like a glacier, a figure wrapped up in the surface of a wall. Structural experiment, historical inquiry, and satirical wit all combine with consummate technical skill in Arsham's ongoing interrogation of the real and the imagined.

To speak of the work of Kaz Oshiro, who lives in Los Angeles, is above all to speak of American art. The young artist is among those who understand and master the long and heavy visual past of which they are heirs. He is called a three dimensional painter in the pure tradition of hyperrealism founded on an almost performative approach to studio work. Indeed, since the end of the 90's and his first amplifiers, he has made the illusion of these objects copied exactly on three-dimensional chassis, his trademark.

This series of 11 black and white photographs is exhibited in its entirety for the very first time at the Galerie Perrotin in Miami, 6 of the photographs having already been shown in September at the Carlson Gallery in London.
Sorry, I can't tell you is of great importance to Paola Pivi. It is markedly different from all of her other work and is sure to surprise even the most informed of audiences. For the first time, Pivi uses black and white photography. The style is very classical and the content is extremely graphic. The 108 x 162 cm photographs depict a private performance in 2008, which was organized and realized without the presence of the artist and photographed by Hugo Glendinning. It has since taken Pivi two years to handle and show these images. The artist does not wish to engage in any further communication on this piece of work. A sign on the door to the exhibition warns of the adult nature of the images and informs the public that minors are not permitted to enter. There is no violence depicted in these photographs, but entry is only recommended to people who are not easily offended by strong images.

Xavier Veilhan
Two new sculpture collections are being presented, the Stabiles and the Figures on plinths.
Xavier Veilhan explores the conventions of classical statuary through a modernist and avant-garde aesthetic. During La Force de l'Art in 2006, the installation Le Baron de Triqueti, rendered this temporal oscillation of the artist, which also leads him to combine the most advanced technology with a traditional workmanship, palpable.
For the past few years, Xavier Veilhan has been using a three dimensional sensing technique to make statues of friends or famous personalities who pose for him, produced from computer files that reproduce a «cloud of points». The series, The Architects in the gardens of Versailles in 2009, unveiled portraits ranging from realistic representation to the limits of abstraction.
The Figures, phantom-like geometric forms, are set as though balanced on steel shafts. The resin plinths of these figures in soli d wood, which are notably abstract reinterpretations of Architects (Jean Nouvel, Richard Rogers, Kazuyo Sejima, etc.), are also highly wrought, recalling Malevitch's architectones. The subject and the plinth participate in the same research, much like the works of Brancusi.
The Stabiles, made in metal, a tangible evolution from mobiles, borrow from the eponymous works of Calder in their shapes, but also from kinetic art in their construction.