10am to 5pm, 7 days a week Art After Hours Wednesday nights until 9pm

The first emperor: China's entombed warriors brings to Sydney one of the greatest archaeological discoveries of our time. This exhibition presents over 120 objects, 10 of the world-renowned warriors and horses, and significant recent finds from the First Emperor's mausoleum located in the province of Xi'an, central China. Through a display that evokes the actual pits of the entombed warriors, visitors are given an unprecedented opportunity to examine up close the intricacies of these wondrous life-size figures. The final section of the exhibition adds to the evolving story with a number of recently discovered objects. 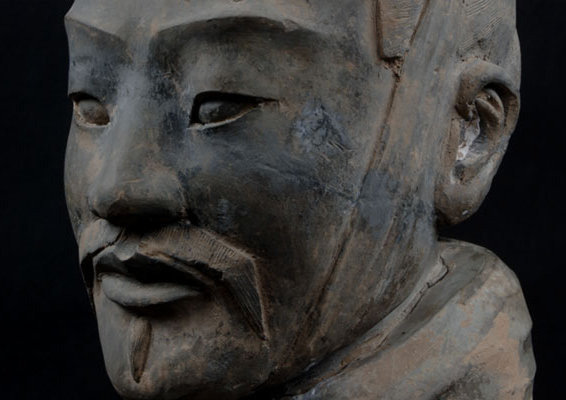 The First Emperor: China’s entombed warriors brings to Sydney one of the greatest archaeological discoveries of our time. Australia was the first country outside China to see these figures in the exhibition Qin Shihuang: Terracotta warriors and horses in Sydney in early 1983. It is therefore fitting that the Art Gallery of New South Wales should organise their return in an exhibition presenting over 120 objects, with 10 of the world-renowned warriors and horses, and significant recent finds from the First Emperor’s mausoleum located in the province of Xi’an, central China.

This exhibition explores the period of Chinese history preceding the Qin dynasty of the First Emperor, and then establishes his considerable achievements. Through a display that evokes the actual pits of the entombed warriors, visitors are given an unprecedented opportunity to examine up close the intricacies of these wondrous life-size figures. The final section of the exhibition adds to the evolving story with a number of recently discovered objects.

The First Emperor: China’s entombed warriors is curated by the Gallery’s director, Edmund Capon, a renowned authority on Chinese art and archaeology, and Dr Liu Yang, senior curator of Chinese Art. Edmund Capon was one of the first westerners to see the initial find in 1974. The exhibition is designed by Richard Johnson, architect of the Gallery’s superb Asian gallery and its acclaimed exhibitions The arts of Islam (2007) and The lost Buddhas (2008).

The exhibition is drawn from institutions including the Museum of Terracotta Warriors and Horses, the Shaanxi Provincial Archaeological Institute and the Shaanxi History Museum.

There is no other individual who has so impressed himself on the unfolding drama of the history of the Middle Kingdom. From the moment Qin Shihuang (259–206 bce) ascended to the throne of the Qin State at the tender age of 13 he began to plan his burial – one man’s quest for immortality has created such universal fascination and an enduring a legacy.

Qin Shihuang is an almost mythical figure from Chinese’s ancient past, variously described as a cruel and brutal ruler, and a hero and revolutionary. Above all he is renowned as the founder of a united China. Born at a time of turmoil in China’s history, known as the Warring States period (475–221 bce), Qin Shihuang was the founder of the short-lived Qin dynasty (221–210 bce). He transformed the seven warring states into one nation and himself from stately king to First Emperor.

The rulers of the State of Qin played their indispensable parts over centuries as they gradually expanded their domain of neighbouring states with unerring military determination, culminating in the ultimate victory of uniting a once divided empire. Qin Shihuang was the ruler to accomplish this task. The exhibition presents carefully selected objects including bronze ritual and jade artefacts, gold and silver ornaments, and palatial architectural components that illustrate the emergence of the Qin State.

The First Emperor is remembered not only as a tyrant, but also for abolishing the old system of feudal investiture and establishing a new hierarchical system of administration throughout the country. He unified the code of laws; standardised the script, measures and currency; initiated gigantic projects such as the final construction of the Great Wall; built highways to facilitate communication; and, of course constructed his final testament to his own immortality – this overwhelming burial.

The Terracotta Army was discovered in 1974 approximately 1km from the Emperor’s tomb. Local farmers were drilling a well and discovered fragments of terracotta figures. Shortly after, Chinese archaeologists excavated three pits containing what is estimated to be more than 7000 terracotta warriors of different ranks together with horses and chariots all designed to protect the Emperor in his afterlife. These figures, created 2200 years ago, are a triumph of realism. They each have a wondrous, animated, realistic style, a radical departure from the symbolic bronzes of earlier dynasties.

The more recent discoveries in the exhibition include three exquisite bronze birds that, together with other animals and acrobats, were designed to entertain the Emperor in the afterlife. Found 900 metres from the outside wall of the tomb were 46 life-sized birds all lining the banks of an artificial watercourse, believed to be a scene of court musicians training birds in the royal park. A number of suites of armour recovered from the pit nearest the tomb are also included in the exhibition.

It is important to note that the actual tomb of Qin Shihuang remains an unopened burial mound. This, perhaps, will be the greatest discovery for the next generation. But Qin Shihuang’s ideas about life after death are reflected by what we find around his tomb, a great underground palace complex – a complete departure from previous tombs. His intention was nothing less than never-ending rule over the universe. He wanted to live forever and now, more than 2000 years later, some may say he has succeeded!