Bringing together the works of 19 diverse artists, the exhibition explores various tactics for representing the complex, contradictory legacies of cultural difference we bring to this contemporary moment. Through fictitious portraits, play acting, historiographic collages and alternate histories, these artists seek potential liberties within the uncertainty of irreconcilable identities. Performance, video, installation, painting, drawing, and sculpture. 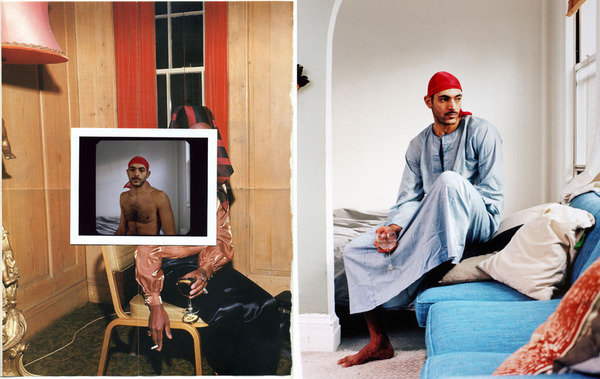 Bringing together the works of 19 diverse artists, Quadruple-Consciousness explores various tactics for representing the complex, contradictory legacies of cultural difference we bring to this contemporary moment. The title itself, a hyperbolic multiplication of W.E.B. Du Bois' idea of Double-Consciousness, plays within the fractures of post-modern experience, transforming its alienated gaps into locations for possible expression. Through fictitious portraits, play acting, historiographic collages and alternate histories, these artists seek potential liberties within the uncertainty of irreconcilable identities. Performance, video, installation, painting, drawing, and sculpture all contribute to this mix of ideas and images.

Organized into two live events, performances will animate the exhibition's premise with a variety of interventions. New York artists Ei Arakawa and Sergei Tcherepnin will collaborate on a performance event that assembles cultural and material strands to reflect a history of the AIDS crisis, using the film Philadelphia as a starting image. The resulting installation with sound will echo throughout the run of the exhibition. New York-based Xavier Cha has choreographed an interaction between a dancer and a cameraman that plays in the space between live and mediated representations. Los Angeles artist Zackary Drucker uses the genre of the drag show to ask spectators "who is laughing at whom?" when gender is spectacularized. New York-based Dynasty Handbag (Jibz Cameron) uses the format of the one-woman show to frame her outrageous character, a smartly grotesque embodiment of degraded neurosis. Los Angeles artist Alexandro Segade uses acting techniques to theatricalize a speculative fiction set in a gay future, reflecting contemporary political debates around participation and exclusion. The performance resonates with Segade's installation, which uses projected drawings of domestic life to add nuance to the public rhetoric around the administration of rights. Taisha Paggett, currently based in Chicago, will enact a critical dance performance that leaves a haunting trace in the gallery space. New York-based Adam Pendleton will collaborate with musicians on an original composition to be performed live. Pendleton's work will also be reflected in a large print of his bold BLACK DADA manifesto.

Video works will bring a variety of moving images to the conversation. Los Angeles artist Wu Ingrid Tsang's video piece adapts his documentary feature, depicting the scene of an historic Latino transgender bar, and the complicated mix of cultures that partied there together. Filmmaker Akosua Adoma Owusu, currently based in Washington D.C., presents a lively meditation on West African cloth, finding spectacular differences among familiar patterns. Owusu's short film Mi Broni Ba will also be screened. Nzuji de Magalhães, based in Costa Mesa, California, will present a video adapted from a live performance; four colorful hand-painted keyboards are played backwards by four players, as they execute a four-part composition that attempts to reflect an experience of daily life. Los Angeles-based Vishal Jugdeo offers a surreal televised world where staged interactions grow increasingly awkward and conventional programming gives way to disjoined lapses. Additional videos by Cameron, Drucker, and Segade will complement and complicate their live performances. Cameron performs a song using only her hands, Drucker and her collaborator enact both positive and negative fantasies of transgender life, and Segade offers a text and music video that imagines a radical outlaw boy-band.

A publication will accompany the exhibition. Contributors to a four-way conversation about the issues raised in the exhibition will include exhibition curator Malik Gaines; artist Michelle Dizon; Eungie Joo, Keith Haring Director of Education and Public Programs, New Museum; and Steven Nelson, Associate Professor of African and African American art history, UCLA.

Quadruple-Consciousness is organized by Malik Gaines, an artist and writer based in Los Angeles. Gaines collaborates with the performance collective My Barbarian, and has organized exhibitions independently, and for LAXART, where he is Curator.

Quadruple-Consciousness has been supported by The Pew Center for Arts & Heritage through the Philadelphia Exhibitions Initiative.

Founded in 1988, Vox Populi is an artist collective that works to support the challenging and experimental work of under-represented artists with monthly exhibitions, gallery talks, performances, lectures, and related programming

All events are free and open to the public.