Realistically rendering images from newspapers, magazines, and television, Vija Celmins filled her canvases with smoking handguns, crashing warplanes, and other images of disaster and violence. "Television and Disaster, 1964-66" explores this essential yet often overlooked period of the artist's work. "Kissed by Angels" presents a small selection of paintings, prints and sculptures by artists who lived in the Los Angeles area beginning in the 1960s. 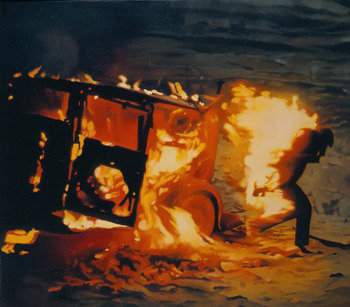 Throughout much of her career, Vija Celmins has been known for her captivating paintings and drawings of starry night skies, fragile spider webs, and barren desert floors—quiet, expansive worlds meticulously executed in gradations of black and grey. As a young artist in Los Angeles during the early 1960s, however, Celmins's work was marked by a distinctly different tone, one influenced by the violence of the era and the mass media that represented it. Realistically rendering images from newspapers, magazines, and television, Celmins filled her canvases with smoking handguns, crashing warplanes, and other images of disaster and violence.

Co-organized by the Menil Collection, Houston, and the Los Angeles County Museum of Art, Vija Celmins: Television and Disaster, 1964-66 explores this essential yet often overlooked period of the artist's work. While recent surveys at the Centre Pompidou and the Metropolitan Museum of Art focused on Celmins's drawings and prints, this exhibition is the first to concentrate on a specific time frame and subject matter within the artist's oeuvre. Curated by Menil Collection Associate Curator Michelle White and Franklin Sirmans, the Terri and Michael Smooke Department Head and Curator of Contemporary Art at LACMA, Television and Disaster uncovers the technical and thematic groundwork from which Celmins would build her international career. Nearly twenty paintings and three sculptures are included in the exhibition.

"In this examination of a brief, early period of the artist's work," said Michelle White, "the unexpected content and emotional weight demonstrates how powerfully Celmins addresses political issues through a quiet poeticism, an ability that reveals her conceptual strength as an artist and establishes her historical importance in the 1960s."

Born in 1938 in Riga, the seaside capital of Latvia, Vija Celmins fled with her family to Germany in advance of the Soviet Army's invasion in 1944. Migrating to the United States four years later at the close of World War II, the family settled in Indianapolis, where Celmins took art classes and graduated from the John Herron Art Institute with a BFA. In 1961, she received a scholarship to attend the Yale Summer School of Art and Music, where she met artists Brice Marden and Chuck Close. A year later Celmins relocated to the West Coast to attend graduate school in painting at the University of California, Los Angeles. At the time the city's art scene was forging a detached Pop Art aesthetic unique to Southern California—what Artforum magazine called the "Cool School". Never fully linked to the California Pop movement, Celmins is often overlooked as an important figure in post-Abstract Expressionist art.

It was a 1964 group of paintings based on images of violence that proved to be a pivotal turning point in Celmins's development as an artist. Rather than simply representing a subject on canvas as she had with her common-object works, she began painting directly from images culled from television, print media, and personal photographs—a practice she continues to this day, with straightforward, almost factual representations of violence and power as she approaches material more closely tied to her childhood in war-torn Europe.

Presented in conjunction with the Vija Celmins exhibition and organized by the Menil's Michelle White, Kissed by Angels: A Selection of Work from Southern California—featuring such artists as Larry Bell, Joe Goode, and Edward Ruscha—further explores the creative environment that influenced Celmins's early work.

This exhibition will travel to the Los Angeles County Museum of Art March 13–June 5, 2011.

Kissed by Angels
A Selection of Works from Southern California

"Kissed by Angels” presents a small selection of paintings, prints and sculptures by artists who lived in the Los Angeles area beginning in the 1960s, to complement the concurrent exhibition, “Vija Celmins: Television and Disasters, 1964-1966.” Organized from the museum’s holdings and Houston-based collections, it offers the chance to see work by Celmins’s contemporaries who were also making art in Southern California at the time, including Larry Bell, Ed Ruscha, Joe Goode, Ken Price, and John McCracken.

Beginning in the 1960s, artists in the emerging and vibrant Los Angeles art scene were developing a new vocabulary that was entirely their own. Influenced by a sprawling city of freeways and sunshine, the cool school, as it came to be known, was defined in a 1964 essay by Philip Leider in Art Forum magazine. In California, Leider wrote, artists were critiquing the mass media’s infiltration of the visual landscape by adopting the visual form of advertising and mass-produced goods. The California artists, however, were responding with a literally cooler look, based on what Leider argued was “a hatred of the superfluous, a drive toward compression, a precision of execution.”

Less boisterous, subtler, and more economical than the iteration of Pop Art on the east coast, it was deeply influenced by the city’s light and arid climate. For example, Ed Ruscha’s painting, Kissed By Angels, 1980, which provides the title for this show, is a long horizon with a deep orange and hazy sky at sunset. Set in the dark silhouetted hills slicing the bottom of the composition is the barely discernable text of the painting’s title. Unlike the white letters of the iconic Hollywood sign, the more discrete pronouncement, like the work from this time and place, is a quiet and cool poetic statement.

This exhibition is organized by Michelle White, Associate Curator and co-curator of “Vija Celmins: Television and Disasters, 1964-1966.”

This exhibition is generously supported by the City of Houston.