Thinking Outside the Box

The exhibition features 100 works selected from the Museum's Department of European Sculpture and Decorative Arts. The objects displayed in this installation range from strongboxes to travel cases and from containers for tea or tobacco to storage boxes for toiletries or silverware. Viewed together, these works reflect changes in social customs as well as the evolution of styles over four centuries. 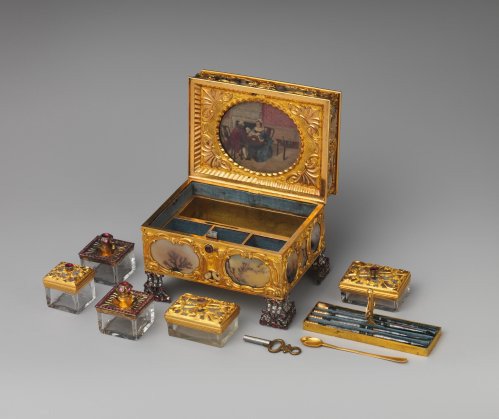 Thinking Outside the Box: European Cabinets, Caskets, and Cases from the Permanent Collection (1500–1900)—on view at The Metropolitan Museum of Art beginning December 7, 2010— will feature 100 works selected from the Museum’s Department of European Sculpture and Decorative Arts. The objects featured in this installation will range from strongboxes to travel cases and from containers for tea or tobacco to storage boxes for toiletries or silverware. These lidded pieces, some of which have not been on display for many years, are made in a large variety of shapes and sizes, and of many different materials, and were created by mostly unknown artists, craftsmen, and amateurs. Viewed together, these works reflect changes in social customs as well as the evolution of styles over four centuries. Many are precious works of art that were collected in their own right.

The objects in Thinking Outside the Box will be displayed according to the materials they are made of or embellished with, including tortoiseshell, carved or veneered wood, porcelain, hard stones and natural substances, embroidery, various metals, leather, enamel, pastiglia, and straw. Craftsmen ranging from silversmiths to furniture makers and from metalworkers to enamellers created the boxes, which are utilitarian in nature and were used either for the shipping of goods or the safekeeping of specific objects or ingredients. Boxes were also exchanged as presents—valuable snuffboxes mounted with diamonds and other precious stones often served as diplomatic gifts, and Italian white lead pastiglia caskets, scented with musk and civet, and thought to have aphrodisiacal qualities, were deemed suitable as bridal presents.

Although it is not always possible to determine what each object was originally meant to contain—such as the 16th–century Italian cases made of boiled, embossed, and tooled leather (cuir bouilli)—it has become clear that many of the elaborately wrought boxes played a role in the dressing rituals of the past. The desire to keep various beautifying implements together goes back to ancient Egypt and led to the creation of special chests. Since the 16th century, the daily grooming ritual known as the toilette (from the toile or cloth spread on the table during the various dressing activities) was taken very seriously and formed, in fact, a kind of semi-public ceremony. The importance of this custom was expressed in the creation of costly toilette services comprising numerous matching pieces, including a variety of boxes and caskets. Exquisite examples of nécessaires, small travel cases containing objects deemed necessary for toilette, writing, or needlework or a combination of these three, will be on view. A particularly splendid example—the 18th–century English nécessaire by James Cox, made of moss agate mounted in gold and set with diamonds, rubies, and emeralds—not only includes dressing implements, but also a clock and automaton, and was probably intended for export to India.

These personal objects are fascinating not only for their shape and decoration but for the treasures and possible secrets they may contain.

Thinking Outside the Box: European Cabinets, Caskets, and Cases from the Permanent Collection (1500–1900) is organized by Daniëlle O. Kisluk-Grosheide, Curator in the Metropolitan Museum’s Department of European Sculpture and Decorative Arts.

A variety of educational programs will accompany the installation, including gallery talks and a Sunday at the Met lecture program on February 27, 2011.