The first act of the new platform includes an international exhibition, "Atlas. Truths, intervals, details and the afterlives of the image", it shows a dozen of artists whose works challenge the notion of the image as a specific product, a crystallization of truth. The iniative activates the city presenting a four-day forum and work also in the Batiment d'Art Contemporain (BAC) as well screening film cycles in the cinemas of the Auditorium Arditi in Plainpalais and the Spoutnik cinema in the Usine - the independent arts HQ of Geneva. 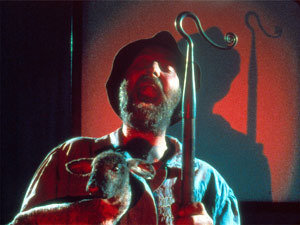 December 9th, 2010, the Centre d’Art Contemporain directed by Katya García-Antón launches IMAGE—MOUVEMENT (I-M) a new platform of thought and experimentation dedicated to the past, present and future of the moving image in its diverse forms. I—M addresses the general public, artists, students and art professionals as well as scholars from the art world and beyond.
Its first act, IMAGE—MOUVEMENT 2010, includes an international exhibition, “Atlas. Truths, intervals, details and the afterlives of the image”, which will take place from the 9th of December 2010 to the 13th of February 2011 and a forum running from 9th to 12th December, 2010.

IMAGE—MOUVEMENT finds its roots in the Biennale de l’Image en Mouvement (1997-2007), previously known as the Semaine Internationale de la Vidéo (1985- 1997), which had become an important cultural event in Switzerland and in Europe.
Given the rapidly shifting ground around the moving image today, IMAGE—MOUVEMENT has evolved in order to expand on the chronological and spatial limitations of its predecessor:
- Eschewing the biennial chronology and proposing instead a continuous set of exhibitions, screenings cycles, performances, conferences, publications and mediation projects
- Exploding spatial relations, through active collaborations with major European and global organisations and institutions

Each specific event presented contributes to nourish research and experimentation within the terrain of the moving image, and consolidates fertile ground upon which to construct IMAGE-MOUVEMENT on the long term.

IMAGE-MOUVEMENT is necessarily characterised by its heterogeneity, corresponding to the various incarnations of the moving image, and ranging from video, film, installation, to diaporama, text and performance. It also includes theoretical research on the current conditions of production and distribution of the moving image. This expanded approach crosses disciplinary boundaries (architecture, cinema, dance, design and theatre) and reflects the impact of the moving image on contemporary culture.

IMAGE-MOUVEMENT is inspired by a kaleidoscopic line of thinking, whereby each impulsion generates new associations and interactions.

First Act: IMAGE—MOUVEMENT 2010
An international exhibition and a four-day forum

IMAGE-MOUVEMENT 2010 proposes a critical zoom-in onto the malleability (discursive and perceptive) of the moving image, by exposing how its structural vulnerability is thoughtfully mined by artists today. The purpose of this first act is to speculate and to destabilise the moving image by conjuring up the notions of album, the archive and the library, amongst others. I—M 2010 touches on questions of critique, theory, production, display and mediation through a variety of styles, including screening cycles, performative & filmic discussions, public art projects, mediation projects and the exhibition format.

From the 9th December 2010 to the 13th of February 2011, IMAGE—MOUVEMENT
2010 presents a thematic exhibition curated by Katya García-Antón. The exhibition shows a dozen of artists, Swiss and international, whose works challenge the notion of the image as a specific product, a crystallization of truth. The artists work under the premise that our own reality, memory or history being constructions, the images should be treated as processes. In so doing reveal the equally artificial nature of the fictive and the factual within the image. Conceived of much like an album of images on the move, the exhibition « Atlas » is sensitive to the interval between images, that moment that connects - in space and/or in time - one image to another.

From December 9th to December 12th, 2010, IMAGE-MOUVEMENT 2010 activates the city of Geneva, presenting work in the Centre d’Art Contemporain, and the Bâtiment d’Art Contemporain (BAC) - situated in the art-heart of Geneva -, and its surrounding area, as well screening film cycles in the cinemas of the Auditorium Arditi in Plainpalais and the Spoutnik cinema in the Usine - the independent arts HQ of Geneva.

The programme will consist of:
- “Atlas on Screen”, operating as an extended space for the exhibition “Atlas”, it screens a cycle requiring viewing conditions closer to the filmic, rather than the traditional white cube space;
- “Archive fire. Between memory and open territory” curated by Emilie Bujes and dedicated to archives, which explores issues around intellectual copy-right and distribution, as well as those related to the historical and/or political context of moving image production;
- “Thinkers & Makers” presents a project curated by the London collective no.w.here in collaboration with Maxa Zoller; under the title “Image / Event” it will be exploring the thresholds of the Image as Event and the Event as Image;
- The public art project “Walking the Edit”, by Ulrich Fischer (Geneva, CH) curated by Laura Gyorik Costas, is an innovative exploration of the frontiers between cinema, electronic art, and social media, and is free for everyone to participate;
- A special screening cycle curated by the Cinema Spoutnik in dialogue with the screening programme of IMAGE—MOUVEMENT 2010;
- Mediation projects by the collective Microsillons and by TRANS master students of the Haute Ecole d’Art et de Design, Geneva (HEAD).

Perspectives 2011
2011 will be dedicated to the development of various content-based projects resulting and directly linked to the rich seedbed of events presented in 2010:
• The publication of a “Theory Reader” gathering the major intellectual questions and debates of the I—M 2010 project;
• The launch of the on-line library of research material derived from the I—M 2010.

ARTISTS OF IMAGE—MOUVEMENT 2010:
ATLAS. TRUTHS, INTERVALS, DETAILS AND THE AFTERLIVES OF THE IMAGE & ATLAS ON SCREEN

The pressconference will take place on December 8th, 2010