Mel Bochner Photographs, 1966-69 reveals the artist's contributions to Conceptualism by highlighting the importance of his photography in the movement's development. For Bochner, photography was well suited to exploring the abstract ideas and systems behind artistic practice, which interested him more than focusing on the representation of objects. 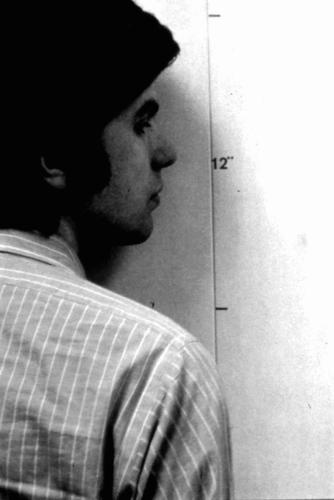 The early photographs of Mel Bochner (b. 1940) will be on view in Carnegie Museum of Art's Forum Gallery, October 12, 2002-January 12, 2003. Mel Bochner Photographs, 1966-1969 showcases 31 important, little-known works that demonstrate Bochner's role during the formative years of the Conceptual art movement.

Bochner, a Pittsburgh native and graduate of Carnegie Mellon University, is best known for installations and paintings that probe the abstract concept of measurement. In the late 1960s, Bochner, like other Conceptual artists, turned away from self-expression, choosing instead to explore organized systems of thought, such as language and mathematics, through artistic practices that used minimal aesthetics.

Mel Bochner Photographs, 1966-69 reveals the artist's contributions to Conceptualism by highlighting the importance of his photography in the movement's development. For Bochner, photography was well suited to exploring the abstract ideas and systems behind artistic practice, which interested him more than focusing on the representation of objects.

Bochner's photographs treat a variety of subjects, investigating a range of artistic phenomena such as perspective, color, scale, and language. A number of pieces in the exhibition record Bochner's experimentation working outside standard photographic formats, including several multi-panel and large-format works that the artist cut and manipulated. When installed several inches from a wall, these works produce an effect that blurs the distinction between two-dimensional media and sculpture.

Some pieces in the exhibition deal with mathematical ideas. 36 Photographs and 12 Diagrams (1966) depicts an numerical sequence, emphasizing the whole, as well as showing the incremental changes in its creation. To do this, Bochner built and photographed a series of stacked wooden blocks, emphasizing the mathematical principle of the arrangement step-by-step.

Works like Surface Dis/Tension (1968) delve into the depiction of perspective. Beginning with a photograph of a grid, Bochner soaked the print and peeled away the image-bearing surace, allowing it to wrinkle while drying. He then photographed the image of the grid as it appeared on this crumpled membrane. Next, Bochner made positive and negative prints of the distorted grid on the same piece of paper, simultaneously revealing the original perspective as well as its altered form.

Other works probe how presentation affects perception. H-2 (1966-67), for example, minimizes the difference between sculpture and photography. The piece is a gelatin silver print of stacked wooden blocks in a cruciform arrangement, cut in silhouette and mounted on Masonite. When viewed head-on, the work gives the illusion of depth. Viewed obliquely, the third dimension disappears. This mutability hints at Bochner's awareness of art's power to bridge, as well as widen, the gap between object and representation.

According to exhibition curator Scott Rothkopf, "People often think that Conceptual art is hard to understand, and that it doesn't offer the viewers a lot visually. Bochner, however, cared very much that his photographs be as interesting to look at as they are to think about."

Reception
Bochner will be at Carnegie Museum of Art on October 11, 2002, for a dialogue with exhibition curator Scott Rothkopf. This event, which begins at 6 p.m. in the Museum of Art Theater, is open to the public and free with museum admission. A public reception follows.

Publication
The 185-page exhibition catalogue Mel Bochner Photographs, 1966-1969, by Scott Rothkopf, includes an essay by Elisabeth Sussman and 40 color plates, as well as 119 black-and-white illustrations. The catalogue, published by Yale University Press in conjunction with Harvard University Museums, is available in the Carnegie Museum of Art Store for $35, and copies will be available for purchase and book signing during the public reception.

Support
Mel Bochner Photographs, 1966-69 was organized by Scott Rohtkopf for the Harvard University Art Museums. Support for the exhibition was provided by Suzanne F. Cohen, Deborah and Martin Hale, Keith and Katherine Sachs, George David, Constance R. Caplan, Arthur M. Cohen, The Fifth Floor Foundation, Mr. and Mrs. D. Ronald Daniel, and the John M. Rosenfield Teaching Exhibition Fund. Major support for the exhibition program at Carnegie Museum of Art is provided by The Heinz Endowments and the Pennsylvania Council on the Arts.