Two exhibitions: Karthik Pandian's 'Unearth' shows 16mm film and architectural constructions to examine the relationship between ancient and modern cultures and the ways in which contemporary societies understand and treat the monuments of societies past. With 'Singular Visions' curators Dana Miller and Scott Rothkopf are presenting just twelve rarely seen postwar works, some of which have not been on view for decades, each individually installed in a separate gallery to encourage and provoke a direct and intimate encounter. 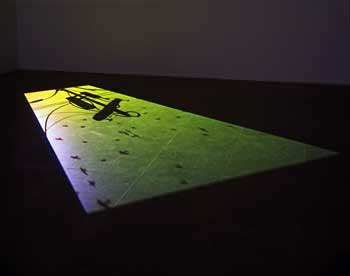 Los Angeles-based artist Karthik Pandian uses 16mm film and architectural constructions to examine the relationship between ancient and modern cultures and the ways in which contemporary societies understand and treat the monuments of societies past. Unearth grows out of Pandian’s two-year investigation into the ancient Native American city of Cahokia, the remnants of which are located outside and underneath the site of present day East St. Louis, IL.

Unearth consists of five monolithic pillars arranged in a line through the gallery. Three pillars are constructed of rammed earth with layers of other materials including shells, magenta twine used at archeological sites, and strips of 16mm film embedded like strata. Pandian’s choice of rammed earth evokes the construction method used to make the large ceremonial mounds which dominated the site at Cahokia. The other two alternating pillars are encased in mirrorpane glass and support 16mm film projectors. For Pandian, mirrorpane glass recalls both the pristine surfaces of Midwestern modern architecture and the conventions of museum displays used to hold cultural artifacts. The two 16mm film loops concern architectural creation, destruction and preservation. Images of the Cahokia Mounds Interpretive Center and a convention for “ethnographic” art collectors are inter-cut with scenes from the aftermath of a ritual-like performance by the artist.

Karthik Pandian (b. 1981) lives and works in Los Angeles. He has had solo exhibitions at Richard Telles Fine Art, Los Angeles; Galerie Meyer Kainer, Vienna (with Mathias Poledna); Midway Contemporary Art, Minneapolis; and has shown in numerous group exhibitions. His films have been showcased at Bidoun Video 2009 in Dubai, UAE, Anthology Film Archives in New York, and the Hammer Museum in Los Angeles. He holds an MFA from Art Center College of Design and a BA from Brown University.

NEW YORK, December 6, 2010 – On December 16, 2010, the Whitney Museum of American Art debuts Singular Visions, a new installation of its fifth-floor Leonard & Evelyn Lauder Galleries, devoted to works from the Permanent Collection. Taking a fresh approach, Whitney curators Dana Miller and Scott Rothkopf are presenting just twelve rarely seen postwar works, some of which have not been on view for decades, each individually installed in a separate gallery to encourage and provoke a direct and intimate encounter.

The installation will remain on view for a year – with periodic substitutions – and will be complemented by a series of collection exhibitions on the Museum’s second floor, beginning in spring 2011.

“Singular Visions,” explained Donna De Salvo, the Whitney’s Chief Curator and Deputy Director for Programs, “is a bold first step within a broader Whitney initiative to reconsider the Museum’s collection, especially our most challenging and complex works, as we prepare for our downtown expansion. The organizing premise of Singular Visions stems from the Whitney’s long-held belief in the primacy of the authentic art experience.”

Curators Miller and Rothkopf note: “At a time when people are constantly barraged by images everywhere from their TVs to their mobile phones, Singular Visions encourages viewers to slow down and experience artworks in a focused way. Each work was selected to convey a distinct impression and a powerful sense of its maker’s vision, whether somber or celebratory, figurative or abstract, quiet or bold. Some of the works on view require their own spaces because they are large or comprise many parts, while others explore difficult topics or emotions that we might wish to consider more privately.” The following are the twelve works to be shown:

- Jonathan Borofsky (b. 1942), Running People at 2,616,216, 1979
Jonanthan Borofsky’s variable wall drawing will traverse three walls in the Museum’s sky-lit stairwell to envelop viewers completely in its graphic energy. Painted directly onto the wall, Running People at 2,616,216 enlarges to heroic proportions a small sketch of jagged figures inspired by a dream. Using an overhead projector and a transparency owned by the Whitney, the artist will work with the Museum’s staff to re-paint this piece at the Whitney for the first time in a decade.

- AA Bronson (b. 1946), Felix Partz, June 5, 1994, 1994 and 1999
AA Bronson’s Felix Partz, June 5, 1994 is a moving portrait of the artist’s General Idea collaborator pictured hours after his death to AIDS-related causes. Printed in lacquer on a fourteen foot–long canvas, the image shows the physically wasted Partz surrounded by colorful bedding and objects of simple comfort, such as a remote control and cigarettes. Befitting the exhibition’s concept of fostering intense and intimate encounters with works of art, the piece will be shown alone in a small gallery, creating an almost chapel-like setting.

- Paul Chan (b. 1973), 1st Light, 2005
Paul Chan’s 1st Light is the inaugural work from his ambitious series The 7 Lights (2005–2007), a group of stunning digital animations that reflect on the legacy of 9/11 and the role of religion in contemporary society. The work was last seen at the Whitney in the 2006 Biennial, where it was singled out as a highlight of the exhibition and subsequently purchased by the Museum.

- Sarah Charlesworth (b. 1947), The Arc of Total Eclipse, February 26, 1979, 1979
Stretching more than forty feet, The Arc of Total Eclipse comprises twenty-nine photographs of the front pages of newspapers from towns along a solar eclipse’s geographical path, from the Pacific Northwest, across Canada, toward Greenland. Each features a “local” image of the eclipse, but none of the accompanying text, save for the newspaper’s title. By isolating these pictures, Charlesworth’s sweeping photographic suite charts the cosmic event across the continent and around the walls of the gallery in which it is shown.

- Robert Grosvenor (b. 1937), Tenerife, 1966
Spanning more than twenty feet and finished in shiny purple automobile lacquer, Robert’s Grosvenor’s Tenerife is one of only two extant hanging sculptures from the seminal period during which the artist experimented with cantilevered structures that stretched from ceiling to floor in feats of engineering. Purchased by the Whitney within a year of its making, the sculpture has not been shown publicly in more than four decades due to conservation concerns. In preparation for its display in Singular Visions, Whitney curators and conservators have undertaken a major conservation project to restore the work’s surface to its original luster. Following extensive archival research, analysis of the paint layers by Harvard University conservation scientists, and discussions with the artist, the work is being resurfaced by a restorer of vintage automobiles.

- Eva Hesse (1936–1970), No Title, 1970
One of Hesse’s last sculptures and a treasure of the Whitney’s collection, this work was installed in the artist’s studio at the time of her death at age thirty-four. Hesse created the work by dipping knotted ropes into liquid latex and hanging the tangled mass from the ceiling with a network of wires. Due to the fragile nature and slow deterioration of its materials, the sculpture can be installed only rarely and with the utmost care. It was last exhibited at the Whitney in 2000.

- Edward Kienholz (1927-1994), The Wait, 1964–65
A signature masterpiece of the Whitney’s collection, Edward Kienholz’s haunting tableau The Wait features an elderly woman fashioned from cow bones and kept company in her living room by a taxidermied cat. A live parakeet perched in an antique cage offers a surreal counterpoint to the morbid scene. The Whitney has long supported Kienholz’s work, purchasing this piece in 1966 and organizing the artist’s first joint retrospective with Nancy Reddin Kienholz in 1996. Singular Visions will be the first Whitney exhibition to include The Wait since that time.

- Ree Morton (1936–1977), Signs of Love, 1976
One of Ree Morton’s most theatrical and complex installations, Signs of Love stretches more than forty feet and comprises multiple elements such as flowers, bows, ladders, and swags of drapery made from brightly painted Celastic and wood. An inherently variable work, Signs of Love was last installed by the artist in the 1977 Whitney Biennial, shortly before her untimely death in a car accident that year. The Estate of Ree Morton donated the piece to the Whitney in 1990 and it is currently being restored for its first installation at the Museum in over two decades.

- Georgia O’Keeffe (1887–1986), Ladder to the Moon, 1958
A significant painting from Emily Fisher Landau’s recent gift of 419 artworks to the Whitney, Ladder to the Moon is among O’Keeffe’s most surreal and dreamlike canvases. The twilight image of a ladder floating high above the Jemez mountains is based on a vision that the artist had at Ghost Ranch, her home in New Mexico for nearly forty years.

Beloved by Whitney visitors but not seen for many years, George Segal’s recently conserved Walk, Don't Walk introduces the exhibition with a striking tableau. The sculpture comprises three cast-plaster figures standing on a cement sidewalk next to a frenetically flashing pedestrian streetlight. Following Segal’s instructions, the sculpture will be presented in a darkened gallery, dramatically spot-lit against a midnight-blue wall. - Gary Simmons (b. 1964), Step in the Arena (The Essentialist Trap), 1994
Bedecked with shoes and printed with a ghostly diagram of foot movements, Gary Simmons’s imposing one-third-scale boxing ring serves as a lyrical reflection on the brutal choreography of sport and its relationship to spectacle and race. Featured in the seminal 1994 Whitney exhibition Black Male: Representations of Masculinity in Contemporary American Art, the work was acquired by the Whitney in 1995 as a gift from the Peter Norton Family Foundation and has not been exhibited in New York since then.

- Tom Wesselmann (1931–2004), Still Life Number 36, 1964
An enormous glass of milk, sandwich, and pack of cigarettes dominate this ten- by sixteen-foot canvas by Tom Wesselmann, part of a series of still lifes made from commercial billboard cutouts that the artist began in 1962. With its imposing sense of scale and vivid color, this painting adds a dynamic Pop flourish to Singular Visions.