For this series Sherman has assembled a cast of uniquely individual characters on large photographic murals, marking a departure within Sherman's artistic practice from the format of the framed photograph. The various personas animating this new body of work were created as shrines to nondescript, eccentric characters who might also be seen to denote sentries, guarding the entrance to some fabled land, casting ambiguous and disconcerting glances at the viewer. 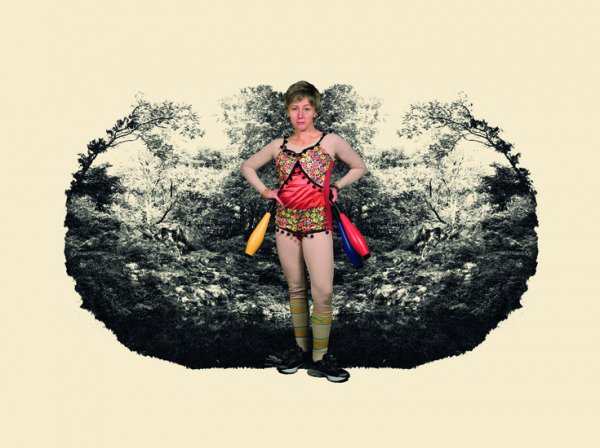 Sprüth Magers London is delighted to present new work by artist Cindy Sherman. For this series Sherman has assembled a cast of uniquely individual characters on large photographic murals, marking a departure within Cindy Sherman’s artistic practice from the format of the framed photograph.

Since the beginning of her career in the mid 1970s Sherman has used herself as the ostensible ‘canvas’ in her works, seamlessly combining the roles of director, model and photographer to create an array of intriguing and provocative personas. Whilst the photographs feature Sherman as the sole human subject, they do not, however, convey her likeness as a self-portrait would. A remarkable performer, in this latest work Sherman captures the subtle distortions of her face and body on camera, rendering her almost unrecognizable as she adopts outrageous guises and utilises her recent embrace of digital techniques to manipulate the scale of each character, their features, and their surroundings.

The various personas animating this new body of work were created as shrines to nondescript, eccentric characters who might also be seen to denote sentries, guarding the entrance to some fabled land, casting ambiguous and disconcerting glances at the viewer. The monochrome character in the three-figure panel is the only member of the cast to seemingly blend into the background, inviting the viewer into this surreal universe with its backdrop of faux-French décor populated by a rabble of hippy-circus types. The combined costumes, poses and facial expressions change dramatically from one figure to the next, enabling the viewer to observe the artist’s permutations of identity from a seated fragile middle-aged dame to an unconvincing medieval soldier.

Each character poses against an incongruous backdrop - a landscape image printed in black and white - reminiscent of ‘toile’: a type of decorating pattern frequently used on home furnishings and wallpaper. Toile was traditionally used to tell a story yet the bucolic settings in Sherman’s new work create quite the opposite effect, heightening the ambiguity and alienation of the characters while further complicating the narrative. The Untitled (2008) series was characterised by a group of almost life-size ageing American socialites. In the photographic murals, the figures are enlarged even further to epic proportions, the grand scale serving to intensify the tension, vulnerability and uncertainty exuded by Sherman’s theatrical types.

The athleticism of one figure is subtly undermined by the detail of Sherman’s performance; the pulled up sport socks & trainers, cropped blonde wig and colourful batons do not reveal the same pride or superiority implied by the character’s confident stance and haunting glare. The same black trainers reappear on another of the characters, implying that they are all mysteriously linked together. Indeed Sherman’s abandonment of make-up in favour of minor digital adjustments unintentionally results in the disquieting affect that each figure stems from the same ‘family’.

Sherman’s decision to eschew make-up as the most effective means of accentuating or de-emphasising the features brings us back to her earlier works such as the Rear Screen Projections series from the early 1980s, whereby she used subtle distortions in lighting, camera angle and costume to achieve a contrasting look. Cindy Sherman was born in 1954 in Glen Ridge, New Jersey, and currently lives & works in New York City. Her work has been widely collected and exhibited by major museums throughout the world since 1980. Solo shows include the Whitney Museum of American Art, New York (1987); the Whitechapel Gallery, London (1991); the Museum of Modern Art, New York (1997); the San Francisco Museum of Modern Art (1998); the Serpentine Gallery & the Scottish National Gallery of Modern Art, Edinburgh (2003); Jeu de Paume, Paris, the Kunsthaus Bregenz, Austria, the Louisiana Museum of Modern Art, Copenhagen & Martin-Gropius-Bau, Berlin (2006). Group exhibitions include The Museum of Contemporary Art, Los Angeles (1989); Centre Pompidou, Paris (2000); Solomon R. Guggenheim Museum, Bilbao (2003/4); Palazzo Grassi, Venice & the Foundation Beyeler, Basel (2006); the Garage Centre for Contemporary Culture, Moscow (2009); Solomon R. Guggenheim Museum, New York (2010). Current groups shows include ‘GSK Contemporary - Aware: Art Fashion Identity’ showing at the Royal Academy until 30 January 2011. The artist will present a solo exhibition at the Museum of Modern Art in New York from 26 February to 4 June 2012.

Cindy Sherman’s new body of work was exhibited at the Pinchuk Art Centre in Kiev from 24 April - 19 September 2010 as part of the group show entitled ‘Sexuality and Transcendence’, before coming to London. Ends