A group show. The phenomenon of "ceausesescu-ism" and its persistence in post communism, the simultaneous existence of communism and capitalism within a nowadays so called democracy with very strange shades of incipient totalitarianism... all these in the larger aspect of the global crisis and world reconfiguration... generates a seek hybrid society. 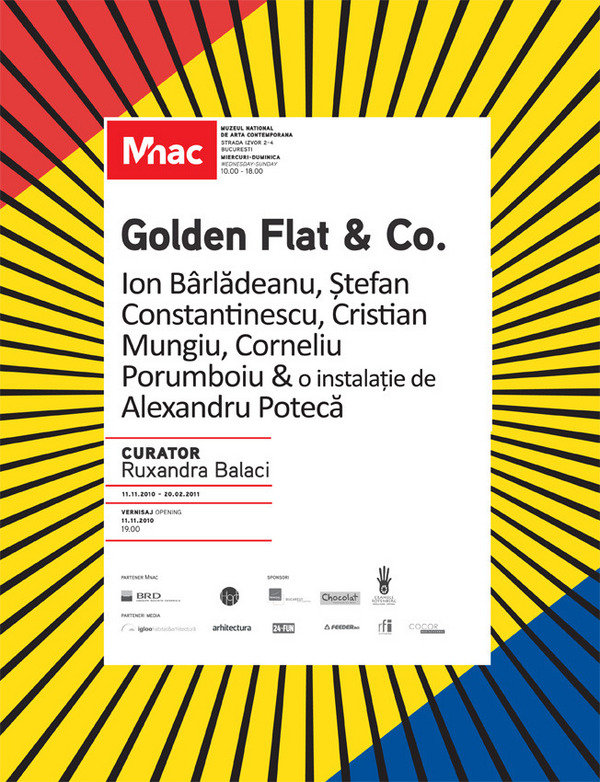 This is an exhibition about shattered illusions and defective mentalities continuously perpetuated in Romania. It is about "Ceausescu" type of attitude within the communist era as well as its present times pernicious sequels. About Communism in Postcommunism.

In which way the contemporary Romanian society relates to the apparently indelible imprint of Ceausescu's "Golden Era" which haven't disappeared but hybridized with most strange neo-capitalist formulas? Consequently is this a large part of this society doomed to collective failure, to moral and cultural stupidity, to inferiority complexes, to a bad karma unable to shift toward a benefic posture, to defeatism and aggressiveness, to fatalism?

Unsolved problems pertaining to a gloomy communist past, still viciously present, uneducated people, doubtful financially powerful individuals, corrupted politicians- gibbons in Armani suits- and the rest of the society reduced to "surviving" and to moral slavery... certifies about an obvious failure on a macro-social scale. Romania seems to be a country interesting only for its socio-pathology, for the almighty Ugly (aesthetically, ethically, morally) present everywhere, for its insane society in which creative intellectuals, inclined mostly always to compromise, deprived of elegance and altruism—are forced to face problems below normally admitted confines, otherwise to temporary /permanently migrate to more generous horizons... or to keep living in aggressiveness and financially dispossessed.

Lack of culture, the massive amount of stupidity, the degrading attitudes, overflowing pessimism inevitably lead towards passive strategies, as Attali once stated: "self renouncement, repentance, putting their hope into others help." The phenomenon of "ceausesescu-ism" and its persistence in post communism, the simultaneous existence of communism and capitalism within a nowadays so called democracy with very strange shades of incipient totalitarianism... all these in the larger aspect of the global crisis and world reconfiguration... generates a seek hybrid society. Dominated by rough energies, low levels of human quality, public opinion shaped for scandal and mediocrity, vulgar mass media excessively manipulative, overlapping attitudes of submission and continuous mental poisoning.

Abjection as a dominant rule, predominant ugliness and vulgarity as general strategy, subliminal fears once induced by totalitarian rules are these the premises of a karmic perpetuous conviction, or possible products of atonement of a future paradoxical redemption?

Under the circumstances could radical irony exorcize these all?

Along his derelict existence, Ion Bârlădeanu selected (for more than 30 years) images from magazines and conceived a long series of unique collages. He creates an imaginary world, a sort of proto-pop imagery.

Romanian/Swedish artist Stefan Constantinescu represented Romania in 2009 at The Venice Biennale, with the films "Passagen" and "Troleibuzul 92". In 2008 he conceived "The Golden Age for Children", an ironic pop-up book about the last 20 years of the communist regime in Romania.

World wide acclaimed director, Cristian Mungiu debuted in 2002 with his first feature film, Occident, winning prizes in several film festivals and being featured in Director's Fortnight at the 2002 Cannes Film Festival. In 2007 Mungiu wrote and directed his second feature, 4 months, 3 weeks and 2 days, which won the Palme d'Or for feature film.

The same for Corneliu Porumboiu who first received acclaim for his short film A Trip to the City (2003). This was followed by his debut feature 12.08 East of Bucharest (2006), which won the prestigious Camera d'Or at Cannes Film Festival. In 2009, his latest film, Police, Adjective won the Jury Prize in the Cannes Un Certain Regard section.

Alexandru Potecă' s The Golden Flat – Last Carnival is an installation about old worn objects, from a typical communist apartment, which prove to be a source of aesthetic and conceptual unpredictability.