Without You I'm Nothing

Art and Its Audience. Complementing the objects on display, a program of performance-based works are presented in the galleries over the course of the exhibition, further emphasizing the critical importance of interactivity and the physical relationship of the viewer to the experience of contemporary art. 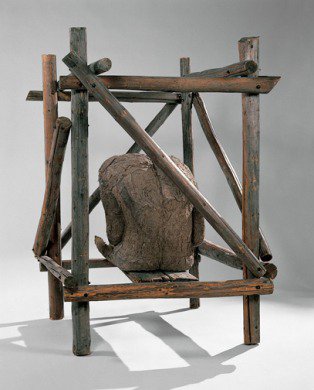 Over the past fifty years, artists have increasingly engaged the presence of the audience in the conception, production, and presentation of their work. Without You I'm Nothing comprises works drawn from the MCA's Collection that demonstrate a cultural shift towards a greater engagement for the individual in the public realm.

Beginning in the 1960s, artists such as Carl Andre and Richard Serra used industrial materials to create sculptures that left behind the traditional pedestal to enter the "real" space of the viewer, producing a new understanding of how work could be experienced. This engagement of the viewer was extended in a more performative way in the 1970s with the work of Dennis Oppenheim -- whose figurative sculptures are often triggered to move based on the movements of the audience -- and Michelangelo Pistoletto, whose mirrored works combine figurative renderings with the viewer's reflected image.

Vito Acconci, Chris Burden, and Bruce Nauman also emerged during the 1960s and 1970s with work that frequently required the direct participation of the viewer to complete them. Their work had a profound influence on artists who came to prominence in the 1990s and 2000s such as Liam Gillick, Dan Peterman, and Andrea Zittel, whose multidimensional work invoked the interaction of the audience to reflect the manner in which architecture and internet technology have encouraged a more networked social sphere. In recent years, even artists working in film and video, such as Aernout Mik, have rejected the idea of theatrical spectatorship, framing their cinematic narratives within architectural and sculptural presentations that the viewer must walk around to fully appreciate.

Complementing the objects on display, a program of performance-based works are presented in the galleries over the course of the exhibition, further emphasizing the critical importance of interactivity and the physical relationship of the viewer to the experience of contemporary art. Without You I'm Nothing: Art and Its Audience is co-curated by MCA Associate Curator Tricia Van Eck with assistance from Dominic Molon, Chief Curator of the Contemporary Art Museum St. Louis.

A Four-Month Companion Series of Artist and Audience Activations

Jonathan Chen: Amplified
January 4 - May 1
For this work, visitors may use a microphone and a small amplified speaker so that when speaking, their voice is lightly amplified.

Lou Mallozzi: Outpost
January 4-9: Tues 6-8 pm; Wed-Sun 1-3 pm
A telescope is set up on the fourth-floor mezzanine above the galleries with a microphone connected to loudspeakers by the entrances to the galleries at ear level. For two hours each day, the artist looks through the telescope and focuses on audience members, describing them in as much detail as possible using the microphone. When the artist is not present the system is available to the public, with simple instructions to look through the telescope and describe what you see. In this way, audiences act as both subjects and objects, observers and the observed.

Mark Jeffery and Judd Morrissey: The Labors
January 11-16: Tues-Sun, 10:30 am-12:30 pm and 2:30-4 pm
Ten invited artists perform a site-specific dance relating the course of human and celestial bodies. A computer generates notation for the dance based on a celestial map. While star data coordinates the dancers' position in terms of footwork, visitor interviews about their own work guides their gestures, marking the passing of time through the movements inherent in human labor.

Sara Schnadt: Drafting Universes
January 18-23: Tues 6-8 pm; Fri-Sun 3-5 pm
This process-based performance -- a gesture of repeated creation, explosion, and removal -- is an attempt to approximate the universe within a 7-foot-square grid on the floor. Referencing Carl Andre's Zinc-Lead Plain (1969) and Dan Peterman's Ground Cover (1995), Schnadt's mirrored, tiled grid implies a field of measurement that when filled with "stars" -- tiny metal nuts that are scattered -- becomes an approximation of the experience of looking at the night sky. The "stars" are created by scattering hundreds of the nuts onto the surface of the grid, which then resemble the distribution of stars within a constellation. Through this repeated gesture that is simultaneously clinical, evocative, and absurd, Schnadt considers the diligence, imagination, and hubris of the scientific process as it tries to define the unknown.

Justin Cabrillos: Following Dance
January 25-30: Tues 5-7 pm; Wed-Sun 2-4 pm
Named after Vito Acconci's Following Piece, in which Acconci followed the public, Cabrillos observes gestures of the audience in the exhibition. These gestures and physical movements become source material for choreography performed on and around Vito Acconci's ladder, Bridge Chairs for Sex and Gender. This site-specific choreography follows, repeats, recombines, and amplifies the MCA visitors' past and real-time interactions with the exhibition.

Nance Klehm: Culture of Soil
February 1-6: Thurs 8:32-9:32 pm; Sat 3 pm
Klehm hosts an outdoor fire and new moon walk on Thursday, February 3, at 8:32 pm—at the rise of the new moon. In traditional agricultural communities, the new moon marks the beginning of spring when the tree sap starts running. At the outdoor fire in the MCA's Sculpture Garden, maple syrup tea is made and shared, then the work continues on a walk where Klehm tells stories about the uses of trees within the urban landscape.

Coppice (Noé Cuéllar and Joseph Kramer): Vinculum (Coincidence)
February 8-13: Tues, 1-3 pm and 5-7 pm; Wed-Sun 1-3 pm
Live performances for two accordions with four speakers play back pre-recorded sounds. The gallery is filled with multiple sounds, all at a moderate volume. The score is procedural, deriving its instructions from coincidences between two accordions as they intersect with the pre-recorded material and the activity in the space.

International Contemporary Ensemble (ICE): The Mathematics of Resonant Bodies
Saturday, Feb 26: 9:30 pm
Tickets $10, with White Silence ticket $5
This special late-night concert in the gallery explores the acoustic properties of percussion instruments. Performed by master percussionist Steve Schick, this 65-minuts piece is divided into seven movements, each of which is performed in a different area of the gallery.

Kirsten Leenaars: On Our Way to Tomorrow
March 1-6: Tues noon-7 pm; Wed-Sun noon-4:30 pm
March 8-13: Tues noon-7 pm; Wed-Sun noon-4:30 pm
This performance is a soap opera based on real-life drama, to be filmed on location at the MCA, using MCA staff and visitors as the core actors and extras. The plotlines and characters in the soap opera unfold as determined by input from the visitors, since each day a new episode is filmed and a scenario for the next episode is developed.

Dexter Bullard: The Dialogues
March 15-20: Tues 7-8 pm; Thurs-Sat 3-4 pm
These performances involve pairs of well known Chicago-rooted performers who have a conversation over the phone, not knowing who they are talking to. The audience listens in on the conversation while a guest sound artist mixes a hypnotic sonic sound, adding an additional dimension to the changing tone of the conversations.

Adelheid Mers: Talking about Creativity
March 22-27: Tues, 10 am-noon (open seminar), 12:15-12:45 pm (lecture), 1:30-3:30 pm (conversation); Wed-Sun, 12:15-12:45 pm (lecture), 1:30-3:30 pm (conversation)
Mers presents a series of lectures each day of the week on the theme of creativity. The lectures are a response to current thinking about the role of creativity in contemporary society which postulates that artists may be the key to jump-starting a new global economy. Diagrams illustrate the lectures and visitors are invited to modify them during conversations.

Jonathan Chen: 19 situations for six improvisers: a system for hearing
March 29 - April 3: Tues 7-8 pm; Thurs and Sat, 2-3 pm
In this improvisational work each musician is provided with a pair of headphones to listen to another performer. The musicians improvise in response to the other musicians they hear, although this changes throughout the performance. Audience members are able to use the headphones to hear exactly the same sound as the musician they are near. The audience can experience the multiple perspectives central to the work by moving between the spaces occupied by each musician and listening to what the musicians are hearing through the headphones.

Jan Tichy
April 5-10: during museum hours
Using video projection as a time-based source of light, Tichy creates physical and psychic spaces. Exploring themes of exposure, concealment, and the seen and unseen, Tichy creates an architectural projection of light on Vito Acconci's ladder Bridge Chairs for Sex and Gender, with which the audience can interact.

Amber Ginsburg and Lia Rousset: Viewing Soundscapes: Tapping the Audience
April 12-17: during museum hours
Tapping the Audience invites the audience to slip on a pair of tap shoes, amplifying the gallery experience and creating an audible acknowledgment of our physical patterns of viewing.

Katrina Chamberlin: Mnemonic
April 26 - May 1: Tues, 11 am-2 pm and 3-8pm; Wed-Sun, 11 am-1 pm and 2-5pm
Chamberlin invites the public to participate by receiving an actual tattoo of a small black dot. Responding to the ephemeral nature of performance, the ‘mnemonic' as tattoo is a constant reminder of the original performance. This event, in turn, creates a permanent mark on the city, documenting the movement of the visitors to the museum, as well as creating permanent proof of something larger than themselves.

Museum of Contemporary Art, Chicago
220 East Chicago Avenue Chicago, IL 60611
Museum Hours
Monday Closed
Tuesday 10 am - 8 pm
Wednesday through Sunday 10 am - 5 pm
Thanksgiving, Christmas, New Year's Day: Closed
Suggested General Admission $12
Students with ID and Senior Citizens $ 7
MCA Members, members of the military, and children
12 and under (must be accompanied by an adult) Free
Admission is FREE all day on Tuesdays year round.