The nine artists from across Australia who will participate in Primavera 2002 - the MCA's annual exhibition of emerging Australian artists under 35 years of age. 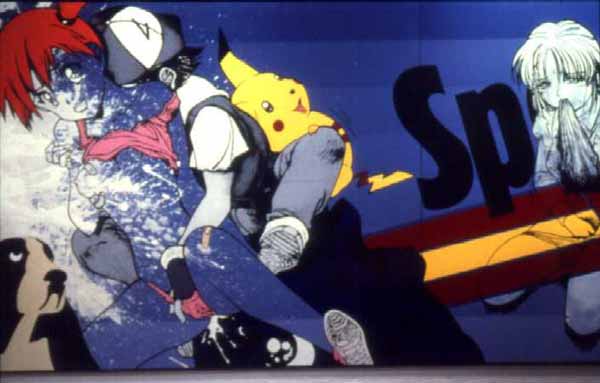 Primavera 2002 is curated by David Broker, Deputy Director and Program Manager at the Institute of Modern Art in Brisbane. Broker's selection of artists has been influenced by a particular interest in "street work" such as graffiti, slogans, murals and culture jamming - manipulating and subverting existing commercial signage - and the ways in which these art forms have been adopted and mutated by artists for the gallery.

Through references to lifestyle, beauty, entertainment and fame Melbourne-based artists Nat & Ali's cheesy installations examine the tenuous zone between adolescence and adulthood, friendship and fascination. These installations, including the kitsch, sugary sweet Friendship is... (2001), to be presented in this year's exhibition, are part of the pair's broader artistic practice which includes stencilling their faces on the streets of Melbourne, and appropriating the 60s style "demo" as a way for promoting both the arts and themselves - as seen in their art is o.k campaign (2000).

In the art galleries of Adelaide, Brisbane, Melbourne and Christchurch, James Dodd has exhibited works that seem to beg for release onto the streets (frequently his gallery work is complimented by a street campaign). His work explores and critiques the destructive nature of Western materialism, often drawing on recent world events such as the September 11 terrorist attacks on New York City and the subsequent American-led War Against Terror.

Tim Silver's guitar, motorbike, racing cars and skateboards, made from melted Crayola pencils, play on the obsessions and desires of contemporary youth culture. The work suggests the timeless aspect of these toys which can also be seen as tools for drawings on the gallery walls or as drawings "in potentia". These 'boys toys' are as much of the sandpit as they are of the street - immediately recognisable and accessible to all.

Billboard advertising, murals and logos are the inspiration for the work of Brisbane 'bad boy' artists Roderick Bunter and Ben Frost. In their monumental painting Where do you want to go today 2000, which is two metres high and stretches over 12 metres long, the pair skilfully employ the imagery of capitalism, poster-art and graffiti, subtly layering it with subversive meanings and interpretations on the innocence of a generation.

Tasmanian artist Sarah Ryan presents a series of slick photographs exploring the effects of materialism on an affluent and aspirational designer generation. Her highly-stylised digital lenticular photographs (3D images) both celebrate and expose the slick banality and superficiality of fashion photography and the glossy magazines that inform and influence contemporary youth culture.

Drawing upon Gothic and schlock Horror film genres, Starlie Geikie's video works explore the cinematic creation of the stereotypical female "victim" persona. Geikie's victims both parody and satirise the historical roles which have traditionally been attributed to women in order to produce a sense of vulnerability, and fear.

The final inclusion in this year's Primavera exhibition is Perth-based artist Arlene Textaqueen who captivatingly draws on the popular Playboy girlie paintings of the 1950s and 60s to produce a comprehensive set of thoroughly modern nudes that, as Textaqueen says "reclaim nudity as a powerful individualised state".