In Jodoin's work, it is the unsaid that counts most and the implicit stories that permeate the expanse around each figure, stories that emanate from shrouded muteness. Using the screen as intermedia, Staats investigates the emotional void generated by his own loss of the Mohawk language and its concurrent world-view. 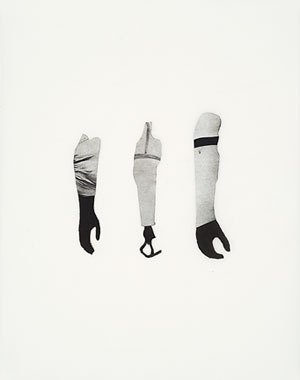 OBORO invited artist Sophie Jodoin to present her recent work on war and childhood trauma to highlight a theme dear to us: peace. Excerpts from her latest series show the moral and physical suffering of war survivors, but also the trials of childhood and daily life.

Informed by visual references from magazines, the Internet and personal photos, these images go back and forth between fact and fiction. They reach beyond drawing and photography into the realm of video, fashioning a compelling whole, at once sensitive and harrowing.

Primarily using black and white drawing and working in series, Sophie Jodoin pursues her exploration of themes on the figure. Mortality, aging, rape, injury, loneliness, cruelty, spoiled innocence and emptiness are central points of interest. These subjects are expressed in gaps, in absences, and in the blank spaces of her loaded images.

In Jodoin's work, it is the unsaid that counts most and the implicit stories that permeate the expanse around each figure, stories that emanate from shrouded muteness. A paradoxical equation –less is more, absence is presence– is the connective tissue that joins all of Jodoin's work up to this day.

As viewer, we find ourselves faced with a choice: we either see the pain in Jodoin's work or, conversely, feel hopeful that we can outlive the sufferings of the everyday.

Sophie Jodoin lives and works in Montreal. She received a BFA in Visual Arts from Concordia University in Montreal. She has had various solo exhibitions and participated in group shows across Québec and Canada, in the United States and in Europe. She has received grants from the Canada Council for the Arts and the Conseil des arts et des lettres du Québec.
http://www.sophiejodoin.com/

From a real-time performance to a video as electronic archive exhibited in the gallery, untitled_liminal_effort is the first of a series of attempts by Greg Staats to redefine his relationship to the Haudenosaunee [Iroquois] concept of condolence and that of its restorative aesthetic and effects on those who grieve and those who condole. Staats' effort at an oral translation is at once a personal confrontation and a continuum of performative burdens.

Using the screen as intermedia, Staats investigates the emotional void generated by his own loss of the Mohawk language and its concurrent world-view. The artist's body becomes the site of exploration of a metaphysical reciprocity through the attempted utterance of 14 translated Mohawk phrases intuitively extracted from the 3 of the 4 parts of the condolence ceremony known as the Mourning rituals: [On the Journey, Wiping Their Tears (the Requickening address), and At the edge of the Woods or Near the thorny bushes].

Staats films (and records) his own live performance during which his hesitations and breath expose an underlying emotional and vulnerable dialogue: confronting the fear of the loss of self, a state of mind further reflected by the codified and heightening voice of the dark wampum string while the screen becomes its mnemonic support.

Greg Staats (b. Ohsweken, Ontario) is a photographer and video artist whose works combine language, mnemonics and the natural world. He has had solo exhibitions at the Kitchener-Waterloo Arts Gallery, Tom Thomson Memorial Art Gallery, Mercer Union, Kelowna Art Gallery, Gallery TPW, Toronto. Group exhibitions include: Ottawa Art Gallery, the Canadian Museum of Contemporary Photography, the National Gallery of Canada and the Museum of Canadian Contemporary Art. Staats is the recipient of the Duke and Duchess of York Prize in Photography. Recently, Staats was Faculty for 2 Aboriginal Visual Arts Thematic Residencies: Archive Restored (2009) and Towards Language (2010) at the Banff Centre for the Arts. Staats has an upcoming solo exhibition in 2011 at the McMaster Museum of Art, in Hamilton, Ontario.
http://www.re-title.com/artists/greg-staats.asp

This exhibition is presented in tandem with articule (www.articule.org), whose opening and artist talk with guest Martha Langford will take place on Friday, January 14, 2011 at 7 pm.