The Hurtful Healer: The Correspondence Issue. "You, World, really need to come visit us in 300 square feet of luxurious, non-denominational, nonlinear, spa-like atmospherics of the gallery Invisible-Exports (that's the name of the gallery). Your visit will be rewarded by mind-expansionand tax cuts for the rich. BYOR! (Bring Your Own Road!)". Participating artists include, but are not limited to, Ali Liebegott, Allyson Mitchell, Bernadette Mayer, Carolee Schneeman, Catherine Lord, Glen Fogel, Harmony Hammond Glen Fogel, Harmony Hammond... 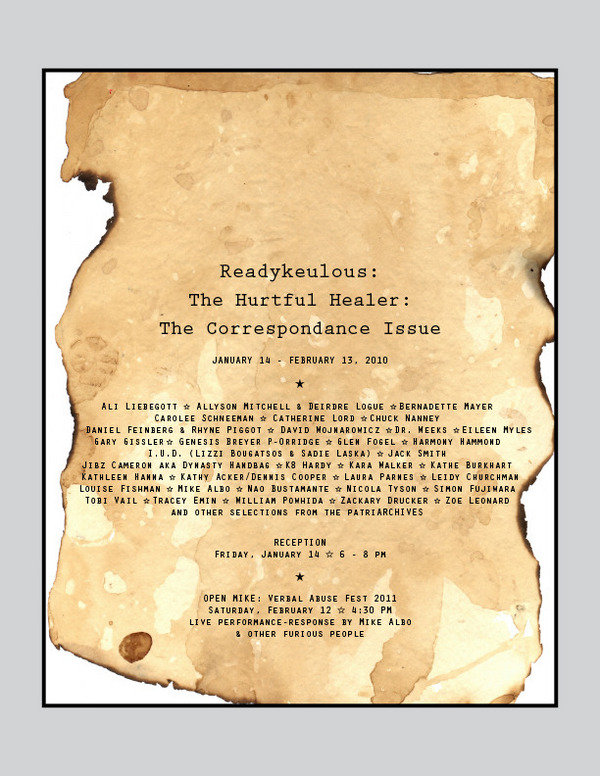 We’d like to invite you to our show because we need to re-educate you about The Situation, specifically, or perhaps more generally speaking, the issues of right and wrong, because “right” now, you’ve got it all WRONG.

Some things that are wrong:

1. A certain type of man of which there are many, all of whom rule theworld and torture—literally—us, for no reason (see our travelbrochure/exposé Stoning for Pleasure and Profit in Many Countries)and all that really needs to happen is your wives roll over and stabyou in their sleep, problemo solved!

3. The Lack of Sleep/Christmas/Corn Syrup Chain of Signifiers/Absence of Leisure Time To Make Art and Write etc./OurEducational Cultural Indoctrination System Which Turns LumpenDull-Witted Three-Year-Olds Into Massive Raving Homo-Bashing TumorsStewing In Hot Tubs On Their Own TV Shows/Axis of Evil. We’re ALL TheBiggest Losers.

5. Animals in captivity, including the loss of all carbon-based life forms

7. Plastics & pesticides (in your tits!)

8. The greater the massacre, the bigger the Xmas bonus

For these reasons and more, you, World, really need to come visit usin 300 square feet of luxurious, non-denominational, nonlinear, spa-like atmospherics of the gallery Invisible-Exports (that’s the name of the gallery). Your visit will be rewarded by mind-expansionand tax cuts for the rich. BYOR! (Bring Your Own Road!)

P.S. Our show is called Readykeulous: The Hostile Healer (TheCorrespondance Issue) because we have chosen at this point in time tohighlight our letter-writing skill-set.