A Room, in Three Movements

An exhibition featuring the work of three sculptors: Katy Heinlein, Sheila Pepe and Halsey Rodman. Unpunished, a Kabinett curated by Nayland Blake features the work of twenty plus artists who have been invited to contribute to a zine project. Three times during the show the location of each sculpture will be changed in the gallery, prompting the artists to improvise a response to each other's work and to the space, and each time inviting a new experience. 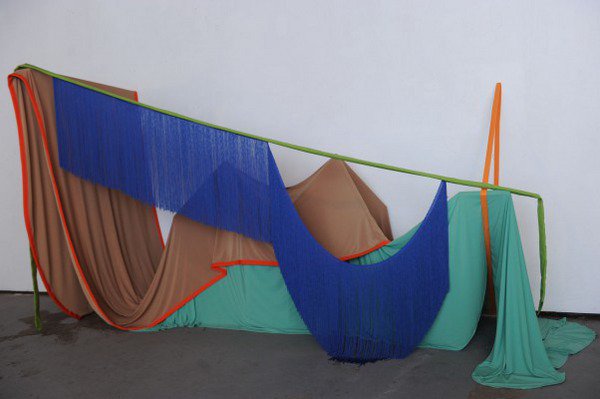 Sue Scott Gallery is pleased to announce A Room, In Three Movements, an exhibition featuring the work of three sculptors: Katy Heinlein, Sheila Pepe and Halsey Rodman. Opening January 20th, the exhibition runs though February 27th, 2011. Unpunished, a Kabinett curated by Nayland Blake features the work of twenty plus artists who have been invited to contribute to a zine project.

Three times during A Room, In Three Movements the location of each sculpture will be changed in the gallery, prompting the artists to improvise a response to each other’s work and to the space, and each time inviting a new experience. As Brooklyn-based artist Sheila Pepe asks, “what happens if a static object is made specifically to change shape in relation to another structure/object? What contingencies can be played out, what references are re-shuffled and animated when that object is moved around in space, around a room?”

Pepe is best known for large-scale, site-specific sculptures that conflate drawing, craft and installation. She meticulously weaves her sculptures using high/low materials including silk thread, plastic and shoelaces with a technique she calls “improvisational crochet.” The work is ephemeral, and often ceremonially disassembled, carried away by participants or retrofitted into a different incarnation. Pepe is most interested in the handmade and particularly the transformation that occurs when a conventional craft object (crocheted, ceramic, sewn) moves into space and becomes sculptural. A Mutable Thing, 2011, made from silk, cotton and metallic thread, begins as a response to the architectural detail of the gallery and will morph through movement to something wearable, referencing the body in space.

Houston-based artist Katy Heinlein creates abstracted assemblages from suspended and draped fabric – satin, fringe, polyester – that are arranged over a hidden armature of mostly salvaged wooden scraps. Part of the skeleton of Natural Fall, 2011 is held together with the tension of its own weight and the friction of its cloth skin, giving a fragility to the structure – slapstick and somewhat booby-trapped. The material references fashion and femininity, while the form has a foothold in minimal sculpture.

Heinlein doesn’t think of her work as being aggressively kinetic, but there is implied movement and a passive kinesis. As a person passes the work or air vents blow on it, the fringe and fabric sway with the air that moves around - like a choreographed fall or implosion; falling down, falling apart, keeping it together.

Brooklyn-based artist Halsey Rodman’s sculpture has a performative/structural bent that documents and includes the art-making process. The Wolves from Three Angles, 2011 is a fanned out, freestanding, multi-unit wooden structure, in which each of three sections houses a near-identical group of abstract paintings and drawings. The paintings were made simultaneously through a process of imbricated gestural mark making and though near-copies, they are not. Rodman’s game of pictorial matchmaking threatens to devalue the spontaneity of gestures and questions the originality and sequence of marks. However, rather than functioning as a critique of gestural abstraction, the repetition and minimal difference opens up a liberated space privileging the beholder as producer.

The title refers to a dream the artist had where he could see a pack of wolves at dawn in a clearing in a damp green pine forest from three positions at once. Rodman notes, “They weren’t tripled, I was.” As it is tripled, the piece is almost the opposite of the dream. As a radially offset series of three, it is ever so slightly rotating out of view from any one vantage point or, alternatively, it is slightly rotating into view, incessantly troubling the viewer’s relation to it in space.