The exhibition sets up a dialogue between contemporary artists and those of an earlier generation. Figurative and abstract sculptures from the 1950s and 60s are placed alongside recent works exploring the formal and physical possibilities of the sculptural object. Works by Robert Adams, Hannah Brown, Reg Butler, Hubert Dalwood, Norman Dilworth... 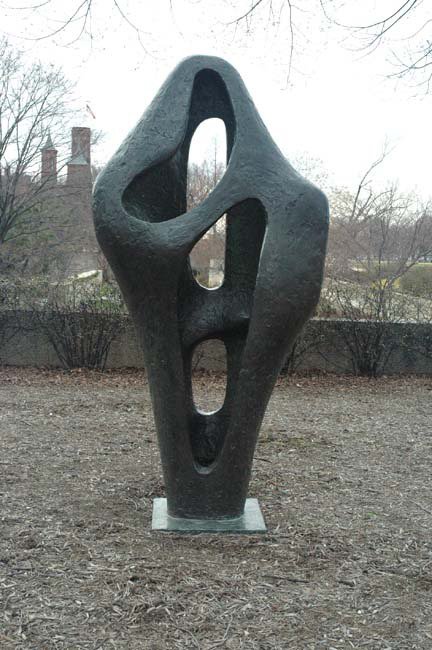 Modern British Sculpture at Gimpel Fils sets up a dialogue between contemporary artists and those of an earlier generation. Figurative and abstract sculptures from the 1950s and 60s are placed alongside recent works exploring the formal and physical possibilities of the sculptural object.

The plurality of practices that are on display in this exhibition demonstrates the diversity of sculpture as a medium: sculpture not simply abstract or figurative; monochrome or colourful; metal or stone. Nonetheless, a concern with colour, shape, and surface are the issues which link, and differentiate these works. Sculpture is seen in its multiplicity, with each artist challenging and engaging with the particular qualities of their chosen material. In the work of Des Hughes and Steven Gontarski, for example, appearances can be deceptive: resin pretending to be metal, fiberglass masquerading as gold respectively. The jagged textures of Bernard Meadows’ sculptural relief become central to the overall effect of his work, while the encrusted surfaces of Hannah Brown’s plant form denies its organic origin. Material and texture combine to create imaginatively charged objects that seek to convey distinct sensations.

Displaying the work of different generations together allows for the recognition of reciprocal and simultaneous links. Apparently self-contained objects speak to and respond to each other, and formal connections might be made between some of the works on display. But while similarities may be found, the kinship is not always clear. Alex Frost’s re-rendering of consumer products in bulbous mosaic forms seems at odds with the modernist ideals of Barbara Hepworth; Ben Long’s scaffold sculptures stimulated by ideas of labour and capital distanced from the female forms of Henry Moore. It is these conversations that force us to reconsider what each work of art might mean, and perhaps view each in a new light.

Sculpture can interpret and activate alternative methods of interacting with the world. Engaging with volume, space and movement, works by George Henry Longly and Camilla Løw encourage formal and conceptual communications between the work, the audience, and the other sculptures within the gallery. Flat, coloured surfaces combine to create objects set in a dialogue with their surroundings. This interest in formal and physical structures finds parallels in the physical and temporal experiences of space stimulated by Reg Butler’s figure in acrobatic motion, Robert Adam’s architectural screen or Norman Dilworth’s minimalist wooden forms. Each of these artists investigates how to create a new space by making an intervention: sometimes slight, sometimes direct, always reconfiguring our existing sense of place.

All of the artists included in this exhibition contribute to the language of sculpture both formally and materially. Each work is idiosyncratic and raises questions about form, experience and context, ultimately demonstrating sculpture as a dynamic and provocative art form.