The KHOJ Marathon is a series of 20 minute public interviews with 25 leading intellectuals. KHOJ - International Artists' Association - has invited Obrist to hold the Marathon in New Delhi as a collateral event of the India Art Summit. 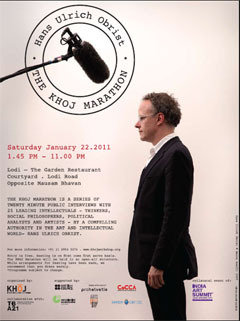 The KHOJ Marathon is a series of twenty minute public interviews with 25 leading intellectuals - thinkers, social philosophers, political analysts and artists - by a compelling authority in the art and intellectual world- Hans Ulrich Obrist.

The first in the Serpentine series, the Interview Marathon in 2006, involved interviews with leading figures in contemporary culture over 24 hours, conducted by Obrist and architect Rem Koolhaas. This was followed by the Experiment Marathon, conceived by Obrist and artist Olafur Eliasson in 2007; in 2008 the Manifesto Marathon showcased different generations of artists alongside practitioners from the worlds of literature, design, science, philosophy, music and film who were experimenting with the historical notion of the manifesto; the Poetry Marathon in 2009 featured unique performances from leading poets, writers, artists, philosophers, scholars and musicians and more recently the multi-dimensional Map Marathon in 2010 that featured non-stop live presentations by over 50 artists, poets, writers, philosophers, scholars, musicians, architects, designers and scientists.

The Khoj Marathon is the first Marathon by Hans Ulrich Obrist to be held in the subcontinent.

A unique public event, the Khoj Marathon hopes to provide a critical understanding of art practice, its varied contexts and its value – other than in monetary terms. By inviting artists and intellectuals from the pure and social sciences, political commentators and activists, to be interviewed by Hans Ulrich Obrist it hopes to provide a spirited interrogation into the world of ideas and thought that also influence artistic practice in India.

Hans Ulrich Obrists’ interview project is cast from a very unusual, individual mold. It is neither journalistic nor a scholarly enterprise, but it rather follows an encyclopedic - philosophical model, based on a very emphatically understood concept of the conversation as a fruitful /successful exchange of ideas and exemplified in the form of the interview.

As Sigmar Polke has said “An interview is good when it has its own internal logic, when it becomes an art form”.

Obrist is a passionate conversationalist, mainly because of his personal desire to find out more about a given subject or a certain position, often inspired by an essay, a book or an artwork. His interviews have assumed an art form.

The Marathon is being organized by KHOJ International Artists' Association, an autonomous, registered society based in New Delhi. KHOJ has built an international reputation for outstanding alternative arts incubation and plays a central role in the development of art practices which are critical and experimental, challenging established thinking about art.

Khoj, has invited Obrist to hold the Marathon in New Delhi as a collateral event of the India Art Summit when artists, curators, art critics, collectors and a general public tend to congregate from across the country, the subcontinent and the rest of the world.

The Marathon is being held in collaboration with Thyssen-Bornemisza Art Contemporary Austria which was founded in Vienna in 2002 by Francesca von Habsburg. It represents the fourth generation of the Thyssen family’s dedication to the arts and is committed to supporting the production of contemporary art and actively engaged in commissioning and disseminating unconventional projects that defy traditional disciplinary categorizations.

It is being supported by Pro Helvetia – Swiss Art Council in India, The British Council, CoCCA-Coimbatore Centre for Contemporary Arts, Goethe-Institut/Max Mueller Bhavan, Bombay Sapphire and Arts Collaboratory, The Netherlands.

The interviews of The KHOJ Marathon will be published by the Foundation for Contemporary Art (FICA).