The MET will display five of its original Autochromes for one week only as part of the current exhibition Stieglitz, Steichen, Strand. Invented by Auguste and Louis Lumiere in 1907, Autochromes are one-of-a-kind color transparencies that are seductively beautiful when backlit. 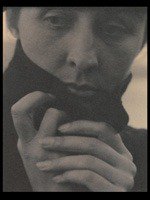 For the first time in more than 25 years, The Metropolitan Museum of Art will display five of its original Autochromes by Edward Steichen and Alfred Stieglitz for one week only—January 25-30, 2011—as part of the current exhibition Stieglitz, Steichen, Strand. Invented by Auguste and Louis Lumière in 1907, Autochromes are one-of-a-kind color transparencies that are seductively beautiful when backlit.

The invention of the Autochrome was a milestone in the history of photography. It was the first commercially available means of making color photographs. Steichen was enthralled by the process and recommended it to his fellow photographers. Praising the luminosity of the new medium, he wrote, “One must go to stained glass for such color resonance, as the palette and canvas are a dull and lifeless medium in comparison.” Among the five Autochromes exhibited are Steichen’s portrait of Rodin in front of his sculpture The Eve and his widely reproduced portrait of Stieglitz holding an issue of his influential publication, Camera Work.

These fragile photographs—composed of minute grains of potato starch dyed red, blue, and green—cannot withstand the exposure of long-term display without suffering irreversible damage. Because of the high risk of the color fading, the Metropolitan—like most museums—has had a policy of not exhibiting its important collection of Autochromes. The Metropolitan recently completed a three-year study of the stability and light-sensitivity of Autochrome dyes, conducted by Luisa Casella, the Museum’s first Mellon Research Scholar in Photo Conservation, in close collaboration with Masahiko Tsukada of the Museum’s Department of Scientific Research, and supervised by Nora Kennedy, Sherman Fairchild Conservator of Photographs at the Metropolitan Museum. The study established that the Autochrome dyes are partially, though not completely, protected from light fading when in an environment where all oxygen has been removed.

Guided by this research, the Museum will display five original Autochromes by Steichen and Stieglitz within individual oxygen-free enclosures and under carefully controlled lighting conditions from January 25 to 30 in the exhibition Stieglitz, Steichen, Strand. During the other weeks of the exhibition, facsimiles of the photographs are displayed in their place.

Stieglitz, Steichen, Strand, which opened on November 10, 2010, at the Metropolitan Museum and will remain on view through April 10, 2011, features the groundbreaking work of three giants of 20th-century American photography: Alfred Stieglitz (1864–1946), Edward Steichen (1879–1973), and Paul Strand (1890–1976). The exhibition presents 115 photographs from the Museum’s collection, including several important series that have not been displayed together for up to two decades, such as Stieglitz’s famous portraits of Georgia O’Keeffe, Steichen’s large colored photographs of the Flatiron building, and Strand’s pioneering abstractions.

The exhibition is made possible in part by Joseph M. Cohen.