Into the hands of time. These photographs are painstakingly staged: when he finally presses the shutter to take the picture, he knows exactly where and how the bird will appear in the pictorial field; whether it will be in or out of focus, where it will be looking, what will be the effect of incidental light catching the camera lens, and where the landscape will be blurred and where in sharp detail. 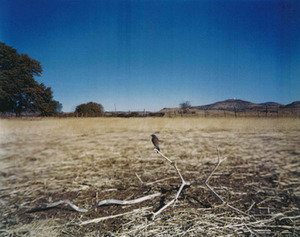 For over thirty years Jean-Luc Mylayne (France, 1946) has dedicated himself with single-minded rigour to the photographing of birds. Each of Mylayne’s large format colour images presents its subject in its familiar habitat, usually a rural setting –farmlands, ranching country, woods and the outskirts of villages– places inhabited by humans and animals alike. Not only are the settings mundane, but so are the subjects: robins, swallows, mountain blue-birds, a harrier... Given that Mylayne’s creatures are wild (for he never tries to tame them) improvisation and spontaneity might seem prerequisites in the hunt for his quarry. However, his approach is precisely the opposite. These photographs are painstakingly staged: when he finally presses the shutter to take the picture, he knows exactly where and how the bird will appear in the pictorial field; whether it will be in or out of focus, where it will be looking, what will be the effect of incidental light catching the camera lens, and where the landscape will be blurred and where in sharp detail. (Typically, he overlays multiple lenses, individually handcrafted to his specifications, to create a complex spatial terrain.)

Making, as distinct from taking, photographs in this way requires considerable patience, vigilance, and time. In choosing his site and subject the French-born artist relies on a chance encounter with one among the many birds in a flock, an individual that evidences a certain curiosity along with a natural wariness about this man, his wife and the substantial amounts of technical equipment invading its terrain. A matter of months may then be needed before rapport is established, along with the sense of trust on which a successful photograph depends. During this arduous period, Mylayne will accustom the bird not only to their presence, but also to the effects of any supplementary lighting the image may need, and to the sharp sound made by the shutter of their large- format camera. The resulting photograph is a carefully calibrated construction in which the bird plays a designated role in a pre-figured mise-en-scene.

The interdependence between humans and animals on which Mylayne’s work is predicated involves a rare level of exchange between two species cohabiting in a given terrain. Recognition of the bird’s otherness is off-set by its ability to establish a common bond: The individual bird accomplishes a task still difficult for most of humanity, argues Mark Dion, a younger American artist, that is, to recognize itself as one of many species (1). By abjuring any binary opposition between animal-nature and human-culture Mylayne draws attention both to the precariousness and the rarity of this richly layered sense of mutuality binding human and non-human. This was once part of everyday life, John Berger contends in his celebrated essay, Why Look at Animals?; today, to our detriment, it has become increasingly remote (2) Animals have played a fundamental role in shaping human culture, symbolically, spiritually, linguistically, and conceptually, as Berger argues; they are an essential component in our evolutionary history. It is consequently only when we recognize them as both like and unlike ourselves that we begin to apprehend our humanness differently, more deeply.

Recorded in Mylayne’s titles is the increment of time required to create each piece; an existential agon. However, this is but one aspect of the duration that informs his practice, for the photograph conflates various temporalities: the extended time of preparation; the instant recorded by the mechanical process; the cyclical time of nature represented by this particular individual (along with others of its kind) returning in its annual migration to that site; and, more elliptically, the historical time that spans the communal existence of humans and non-humans in this particular location. Time is consequently at the heart of his work, and at the centre of his metaphysic.

Earlier writers on Mylayne’s work tended to regard the role of the birds as something of a pretext; that is, they considered the birds nominal subjects –vehicles for philosophical speculation. Of course, despite his deep knowledge of the habits and lifestyles of these creatures, Mylayne clearly has no wish to prove himself as an ornithologist. Through his work he proposes metaphysical questions, grounded in an exchange between humans and animals and amplified by formal, structural and conceptual strategies. Thus he has frequent recourse to compositional modes that may involve serial repetition, mirroring and reversal, or a traditional format such as a diptych or triptych. The heightened import given by reference to, say, the tripartite structure of a medieval altarpiece serves to underscore a work’s conceptual register. For example, No 89, February 1987—February 2008 is comprised of a central panel in which a dead harrier (shot by a young boy) has been hung on a barbed wire fence. A ghoulish trophy, it is flanked by panoramic desert scenes created from a single landscape motif and its mirror image. On the horizon may be glimpsed an observatory, where research into time stretching back billions of light years generated from distant stars is studied in conjunction with futuristic projections into the possibilities of humans inhabiting other parts of the solar system. Also visible on the horizon is a conical mound, a geological form that resembles ancient burial tombs found in many cultures from earlier eras, and that prompts reference to the indigenous tribes who once roamed these prairies. The two images on which the triptych is based were taken some twenty years apart; the first was made in a region in France close to where the artist was born, and where he has worked intermittently for many years. The second was shot in Texas, where he worked systematically over a period of some six years, 1999- 2005, and where the bulk of his recent production originates. While not irrelevant to the larger meaning, the juxtaposition of images from two very disparate sites (a rarity in his practice) does not automatically announce itself to the spectator. More telling is the extended period, of some twenty years, required to distil the work’s thematic: a counterpointing of eons during which humans and other species barely and benignly inflected the terrain they occupied, with the present when not only are the depredations caused by our current lifestyles and values threatening to other species, but our focus has increasingly moved to realms beyond this planet.

When encountered within this extensive retrospective of Mylayne’s art, No 89 carries an unusually tragic valence. Less sombre in tone are the majority of works that comprise the exhibition, while in the central gallery –the “nave” of Palacio de Velázquez– a glorious blue expanse serves to frame the tiny subjects in each photograph. Yet even here it is impossible to ignore how tentative and precarious are the relations that bind human and animal, how delicate and fragile such interconnections have become today. Nonetheless, through the subtle beauty of his visualizations, Mylayne offers a paean to the possibility of more communitarian relations.