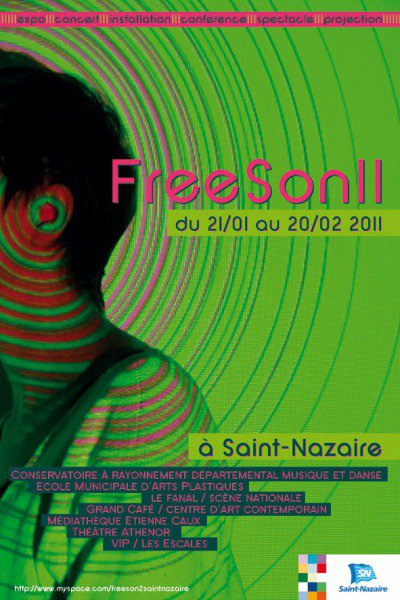 Landscape, map, territory, topography, pathways... In a text entitled Frontières et pensée interprétative [Frontiers and Interpretive Thought], Christophe Kihm underlines the extent to which spatial references are often called upon to describe certain contemporary visual forms (readymade, minimal art, land art, the site-specific) that "reflect" space and use it to question the conditions of their own definition as much as those of their exhibition. A fortiori, he continues, this vocabulary adapts itself particularly well to sound forms that are concerned with the diffusion and the spatialization of sound. From the "furniture music" of Erik Satie and the "ambient music" of Brian Eno, by way of musique concrete and sound design, the spatial dimension has become an essential composant of sound.

Sound installation for 9 loudspeakers
Conceived in relation to the entire space of the concert hall, 1997 / 2011

"The important thing for me is the act of listening, of listenings: the manner in which each person can construct a personal listening act, find a way through the sounds like an inquiry, a cerebral, emotional or musical game."
Dominique Petitgand

Dominique Petitgand has been composing sound pieces since 1992. Released as discs, played as concerts or taking the form of installations, these works configure a universe that is both immediately familiar AND definitively destabilizing.

This double-barrelled effect develops of course out of the material that feeds into the artist's work: principally recorded speech, that of people relating lived experience, often intimate, always intense. The recordings capture speech, but also that which accompanies it: breathing, mouth noises, and all that the silence between the words holds, hesitations, inarticulacy, memory lapses. Sometimes language even breaks away so far as to become primitive murmur or distracted humming.

Who are these voices? You and I, children and the elderly, a sample of humanity. Perhaps what caracterizes them, above and beyond their diversity, is their inhabitual register, an extraordinary tone of voice, a strange musicality in the phrasing. And what do they tell us? Generic stories, in which something often vacillates and dysfunctions: the body, thought, or the predictable passage of daily reality. Dominique Petitgand sculpts this flux with precision. He performs clean cuts, stretches silences, brings out the sonic texture—and the story that it articulates—according to a logic of economy or outline. In this desire to say as much as possible with as little as possible, he constructs "intensities by subtraction"(1).

If the work willingly integrates music, it does so according to shared modalities: by whistled refrains or explosive noise, electrical layers or shards, Dominique Petitgand samples, superimposes or interleaves without ever being concerned with the ornamental.