An overview of Picasso's graphic works and drawings from the years 1901 until 1972. Mainly figurative in content the works show human relationships as an area of tension between man and woman or artist and model. Another focus lies on portraits and nudes as well as bullfighting scenes and minotauromachias. 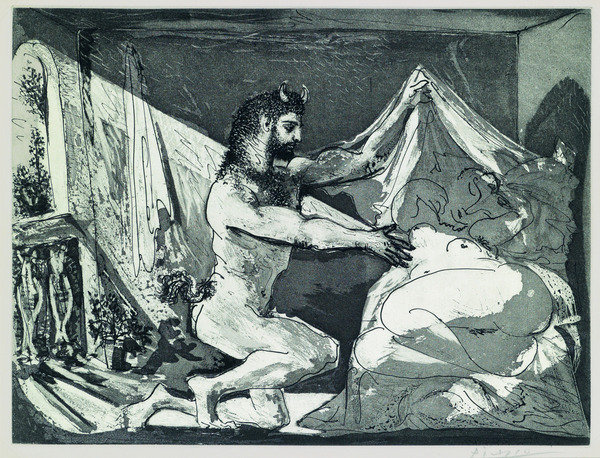 We are pleased to announce the exhibition Pablo Picasso – drawings and graphic works. With 36 major works on paper the exhibition offers an overview of the graphic and printed work of one of the most outstanding figures in the history of art and highlights eight decades of Picasso’s work. In their richness of ideas and variety of forms these works seem as exuberant as his paintings and demonstrate the remarkable originality of this part of his oeuvre.

The chronological focus of the exhibition lies on the 1930s and 1960s. There are 10 works from the Suite Vollard which dates from the thirties. Initiated by Parisian art dealer Ambroise Vollard this centesimal series of etchings is regarded as Picasso’s main work in printmaking. Many of these etchings deal with the relationship between man and woman, which is illustrated in numerous variations. Other motifs show themes like “artist and model” or scenes with mythological figures such as fauns or Minotaurs, as in Faune dévoilant une dormeuse (Faun unveiling a sleeping woman) from 1936/39. The late works from the 1960s are characterized by a great freedom in formal aspects and a playful, associative handling of subject and representation. In the exhibition an outstanding series of enigmatically entitled etchings dated 1968/69 shows miraculous scenes with musketeers, acrobats and circus riders.

In addition to these main focuses the show is completed by single works which comprise the period from 1901 to 1971 and thus exemplarily illustrate Picasso’s entire lifework. Among these are early works such as Le divan (The divan) from 1901, works from the neoclassical period, portraits from the 1940s and 50s and outstanding drawings like Combat de Centaures (Fighting Centaurs) from 1959 or Le peintre (The painter) from 1964, a lithograph to which he added gouache and ink. Picasso proves to be an artist who constantly varies and develops his oeuvre, an inventive virtuoso, both serious and humorous, who radically changed our perception of art.