Monochrome & Monogram. The show presents a selection of photographic works, artist's books, prints, and small-format paintings, all created between 1972 and 2011, which take as their theme the concept of the artist's name. His works examine issues of authorship, anonymity, originality and, especially, the status of the artist in a given cultural system. 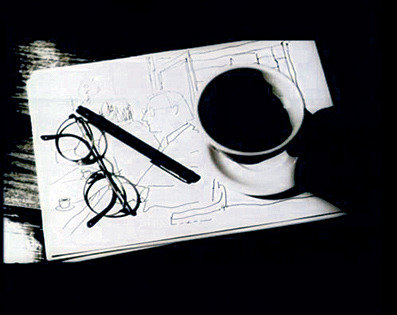 Galerija Gregor Podnar is pleased to announce Monochrome & Monogram, Goran Trbuljak’s second solo exhibition in Berlin. The show presents a selection of photographic works, artist’s books, prints, and small-format paintings, all created between 1972 and 2011, which take as their theme the concept of the artist’s name.

The attribution of a work to an artist and, conversely, of an artist to a work; the use of monochrome as a way of reducing personal handwriting; and the multiple signification of the artist’s name are the important elements in these works, which examine issues of authorship, anonymity, originality and, especially, the status of the artist in a given cultural system.

Untitled (Trbuljak-Artist) II (1973) consists of eight black-and-white photographs of the long corridors of the Châtelet subway station in Paris and their moving walkways. Goran Trbuljak attached two small glue strips with the words “ARTIST” and “TRBULJAK” to the handrails. The photographs document a number of trips on walkways at the very moment when one or both of the words just happened to appear next to him.

Other works, in a way typical of conceptual art practices in the 1970s, contain in their titles instructions for how they are to be used. One example is the series of thirteen black monochrome panels entitled Untitled. Each time these works are exhibited, one letter of my name and surname has to be crossed out (1972–1980). Another monochrome work, made especially for the present exhibition, is entitled Untitled. Each time the market value of this series of monochromes goes up, one by one the letters of the name and surname of Pablo Picasso are inscribed in reverse order by scratching away the paint (2011). This is an allusion to a certain car manufacturer that uses an artist’s name as the brand name for its “Grant Picasso” models, it is a way of flirting with a famous name in art, and it is the earnest wish of a person who has remained young at heart to leave his monogram in the varnish of a car.

A pioneer of conceptual art in the former Yugoslavia, Goran Trbuljak began his career in Zagreb in the late 1960s with works that critiqued the institutions of art and questioned the nature of the artwork. Consequently, his art took unusual forms: calling cards left for gallery staff, opinion polls that demanded a response, and even a “referendum” of passers-by in Zagreb in 1972 on the question, “Is Goran Trbuljak an artist or not? 1. Yes 2. No.” In the mid-1970s, Trbuljak entered into a dialogue with painting: The Sunday Painting (1974), for instance, is in fact a photographic documentation of one of the artist’s street actions: on several different Sundays, Trbuljak went to an art-supply store and painted on the display window in correlation with the blank canvas and easel behind the glass. And each Monday, the store’s staff would remove the paint from the window.

The Zagreb-based art critic and curator Branka Stipančić writes of Trbuljak: “He was the first artist in Croatia to question the meaning of exhibiting work within the gallery system, and the status of an artist as part of this, integrating such questions into his art. Every new step in art was always an ethical issue for Trbuljak. His influence on the generation of post-conceptual artists in the mid 1970s was decisive.”

Goran Trbuljak’s work has been shown at the Venice Biennial in 1995, as well as, amongst others, in the following exhibitions: "Kurze Karrieren", at the Museum Moderner Kunst in Vienna (2004); "...Und so hat konzept noch nie Pferd bedeutet", at the Generali Foundation in Vienna (2006); "Making of Art", at Schirn Kunsthalle in Frankfurt am Main (2009), "The Death of the Audience", at the Secession, Vienna; and "The Promises of the Past: A Discontinuous History of Art in Eastern Europe", at the Centre George Pompidou in Paris (2010).