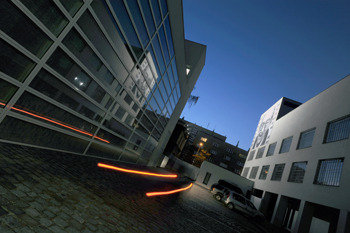 The project for the DOX Centre for Contemporary Art will be the first joint concept of the three artists. It combines conceptual, minimalist and contextual approaches, as well as new conceptual approaches linking interest in sculptures and objects. The exhibition comes into being as a mutual conversation, including the choice of the individual works. Taking up three floors, the exhibition is intended to present the work of the artists in terms of thematic relationships, which will be legible in many different ways.

Nina Beier and Marie Lund first met Jiří Kovanda in Prague in 2006. Originally from Denmark, the two artists were exhibiting at the Display Gallery. After that they encountered Jiří Kovanda several times on the international art scene, such as at the Tate Modern in 2007, at the All the Best exhibition at Gallery OneOneOne in London in 2008 and when Jiří Kovanda invited them to take part in his exhibition When I Was Little, I Used to Play with Girls at the Gallery Klatovy / Klenová. That fact alone indicates certain connections in their work and approach. These connections have not disappeared even though both Danish artists decided for a solo career - Nina Beier lives and works in Berlin, Marie Lund in London.

Nina Beier and Marie Lund collaborated from 2005 to 2009. They are now both working individually and the exhibition will feature their recent individual works. Their joint work was located (and still is, to an extent) on the specific boundary between performance and intervention. At first it consisted chiefly of social experiments based on collective implementation of scripts proposed by the artists. Later it focused on the topic of institutional framework and the operation of the art world in general. In the recent period their language has shifted markedly to the environment of objects and “sculptures”. These carry a message about the transformation of stably viewed reality by means of a different perspective setting. Although the starting point remains conceptual, the emphasis on the material and sensual substance is undeniable.

The art of Jiří Kovanda is based on similar principles and a very similar shift can be observed in his present approach. His reaction to minimalist esthetics and the Arte Povera movement during the 1990s gave way at the beginning of the millennium to interventions that are generally termed here “discreet tendencies”, of which Kovanda is the most striking exponent. Kovanda´s invisible objective situations, created by an imperceptible context and by defocusing the framework of the work of art, have been enhanced, as in the case of Nina Beier and Marie Lund, by new interest in the visuality and content of the object and installation. The esthetics of impoverishment and invisibility combine with their opposite – beauty and visibility – not for themselves but as a result of the changing sensitivity of the time and its need for language change.

Spanish conceptual artist will present on the top floor of the DOX tower a monumental project, whose central idea is to highlight defunct buildings, monumental absences in urban areas, and energies that are generated around them. In 2008 Garaizabal introduced a project called Memoria Urbana. Using an iron construction fitted with light and acoustic elements to show their spirit, Garaizabal materializes already vanished buildings that once were of great importance. The initial impetus was the belief and personal look of the author that the project "must be realized".

The lost Czech Bethlehem Church (Böhmische-Bethlehemskirche) that was in Berlin and was part of Czech-German history, was a unique building. Thanks to the generosity of King Frederick William the 1st, Czech refugees who left their homeland because of religious reasons were admitted in the Friedrichstadt District in Berlin. Two years ago, Garaizabal began to look for signs of missing Berlin church and collected numerous documents found in Berlin and the Czech Republic. The final aim is once again to portray the church in its original size (a height of 30m) and its original location in Berlin. The project is preceded by the presentation of its model in Prague, the capital city of Bohemia. It is the region from which the refugees came, and which was an inspiration for aesthetic and ethical content of the original church.

The exhibition at the DOX Centre for Contemporary Art presents the creative process of the artist's work, a model of "Understanding Bethlehemskirche" with a height of 4.75 meters. 10 accompanying artworks are an integral part of the installation.

Michal Cimala is a distinctive figure on the contemporary Czech art scene. He was born in 1975 in Havířov and graduated at the Academy of Arts, Architecture, and Design in Prague where he was a student in the metal and jewellery studio headed by V. K. Novák. He currently works as assistant in the studio of Jaroslav Róna at the Academy of Fine Arts in Prague. Since 2006 he has been a member of the Trafačka art centre at Vysočany in Prague.

He operates on the borders of design and free art, using all sorts of materials and media. He commented on an inspiration he derives from cities and industrial surroundings: “All those sounds and noises that the city emits, the taste or aftertaste of its various districts, are all deeply ingrained in me.” His work combines elements of sculpture, industrial design, painting, drawing, sound and performance. The exhibition at the DOX Centre of Contemporary Art is a selection of his musical objects and cycles of drawings.

Instruments
Cimala transfers his interest in dynamic shapes and process mainly to his objects. He has gradually shifted from crude industrial aesthetics to plastics and plexiglass, developing an untraditional method of treating industrial waste. While on a grant-funded internship at Universität der Künst in Berlin he discovered a new material – yellow plastic gas piping. His sculptural experiments with that material led him to design experimental musical instruments. He subsequently attached strings and guitar pickups to his instruments, thereby adding sound effects to his sculptural creations. This has given rise to a bizarre, fully functional vision of musical instruments, which, among other things, led to the founding of the alternative musical ensemble Roxxxor Vysočany, which performed in the 2001 - 2009 period. In addition to plastic musical objects, Cimala also creates so-called “Snowguitars” – bass guitars sawn out of snowboards.

Drawings
The extensive installation of drawings covers the period from 1995 to 2010. Cimala abandoned calm “situations” in favour of fast and deft drawings, and his choice of theme is reminiscent of film or pop dynamic. The themes of “sex”, “situation”, “stress” or “outsiders” have the cogency of diary entries. A major part of the installation consists of sketches of developmental prototypes of various pieces of apparatus and structures. Cimala’s works on paper employ many techniques, from pen and felt-tip to airbrush.

Press Conference:
Common press conference for the exhibitions in January - the group exhibition of Nina Beier, Marie Lund and jiří Kovanda, the project of Juan Garaizabal and the exposition of Michal Cimala - will take place on January 26 at 11 am at the DOX Café.