Third Mind. The exhibition consists of more than 60 objects, including books, collages, drawings, paintings, and sculptures spanning his twenty-year career. It covers two decades of Hawkins's artistic production, highlighting the medium of collage as a primary focus of his expression. A series of altered books dating from the early 1990s, in addition to rubber mask and magazine clipping assemblages from 1991, will be shown together for the first time since their creation. 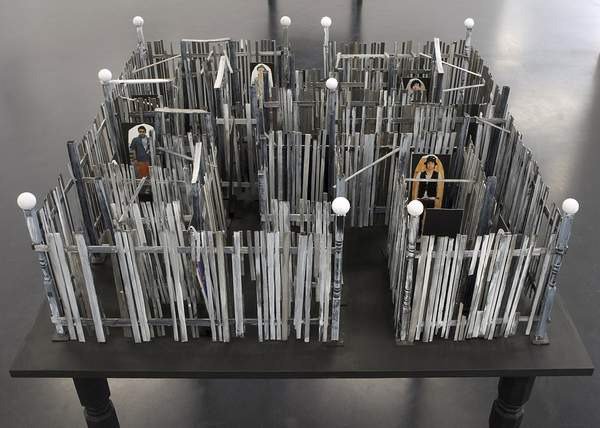 The first U.S. survey exhibition of Los Angeles artist Richard Hawkins (b. 1961) will travel to the Hammer Museum from The Art Institute of Chicago this winter. Richard Hawkins: Third Mind, on view February 12 through May 22, 2011, consists of more than 60 objects, including books, collages, drawings, paintings, and sculptures spanning his twenty-year career. The exhibition will be installed in Gallery IV of the museum, and several artist’s books, including his work Correspondence with John Wayne Gacy regarding having a portrait painted of Tom Cruise (1988-1994), will be on display in the Hammer’s Grunwald Center for the Graphic Arts.

Since the early 1990s, Richard Hawkins has become one of the most important figures living and working in Los Angeles, first and foremost as an internationally recognized artist and also as a curator, writer, and teacher. Since the early 1990s, he has developed an emphatically diverse art practice that resists easy classification. Offering alternate histories through the juxtaposition of decidedly unlike elements, whether ancient Greek and Roman sculpture, 19th-century French Decadent literature, post- structuralist theory, 1980s teen heartthrobs, Native assimilation in the American Southeast, or the intricacies of Thai sex tourism—the work is, at its core, about the pleasure of intense looking.

“This exhibition is long overdue. Richard’s influence among several generations of younger artists is really immeasurable,” remarks Hammer Museum Director Ann Philbin. “It is incredibly exciting to see all of this work shown together for the first time. The breadth and trajectory of his practice is very impressive.”

Richard Hawkins: Third Mind covers two decades of Hawkins’s artistic production, highlighting the medium of collage as a primary focus of his expression. Hawkins’s earliest collages consist of photos of film celebrities, male models, or porn stars, taken out of context and reframed into compositions that often tease out homoerotic admiration and desire. A series of altered books dating from the early 1990s, in addition to rubber mask and magazine clipping assemblages from 1991, will be shown together for the first time since their creation. All six of the original editioned prints from the disembodied zombies series (1997)—inkjet prints of the decapitated heads of idealized males bleeding from their severed necks, set against ethereal polychrome backgrounds—are represented in the exhibition. Other works include several significant collage series from 1993 and 1995; collage paintings from the recent Celestial Telegraph series (2008); and several table and dollhouse sculptures.

The title Richard Hawkins: Third Mind recalls the subtitle of his 2007 exhibition at De Appel in Amsterdam, Of two minds simultaneously. While the phrase “of two minds” typically means to be undecided or unsure, it is not indecision that is at play in Hawkins’s practice. Rather, his work celebrates duplicity and ambiguity; Third Mind thus serves as a testament to the artist’s continued propagation of “minds,” made up of a steady stream of thoughts, desires, fantasies, opinions, memories, meanings, and possibilities.

The exhibition title also invokes William S. Burroughs and Brion Gysin’s 1978 book, The Third Mind, which introduced the concept of the “cut-up” in literature. Inspired by the history of collage in the visual arts and a natural extension of Gysin’s own visual collage practice, the cut-up became for the authors an alternative to the “either-or proposition” and the linear declarative sentence structure that “shackles” Western thought and linguistics. Just as Burroughs and Gysin deconstructed narrative structure through their cut-ups, Hawkins continually reconstructs himself as an artist with a practice that is remarkably unified within constant and fluid shifts among genres, techniques, and mediums.