With more than 70 works of art, including towering masterpieces such as the Self-portrait with a palette and Moulin de la Galette, Picasso in Paris, 1900-1907 outlines how in just a few years Picasso grew from an unknown young artist into the leading figure of the French avant-garde. His development into a pioneering avant-garde artist is divided into four periods in this exhibition: Picasso discovers Paris, Picasso as a Symbolist, The life of the bohemians, An innovative, modern style. 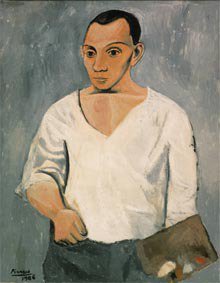 An exhibition devoted to Pablo Ruiz y Picasso’s (1881-1973) spectacular artistic development in Paris, a dazzling cultural centre at the beginning of the 20th century, is being held in the Netherlands for the first time. With more than 70 works of art, including towering masterpieces such as the Self-portrait with a palette and Moulin de la Galette, Picasso in Paris, 1900-1907 outlines how in just a few years Picasso grew from an unknown young artist into the leading figure of the French avant-garde.

The exhibition, curated by renowned Picasso expert Marilyn McCully and organised jointly with the Museu Picasso in Barcelona, presents major loans from private collections and museums, such as the Centre Pompidou in Paris, and the Metropolitan Museum of Art and the Guggenheim Museum in New York. The exhibition is on view from 18 February through 29 May 2011 in the Van Gogh Museum in Amsterdam from where it will travel to Barcelona. All kinds of activities around the theme of Picasso will take place in the Van Gogh Museum, for instance the dance performance Nomade (Nomad) by Krisztina de Châtel on Friday evenings, free Sunday lectures on the first Sunday of the month and a children’s workshop ‘Paint your own Picasso’ in the weekends.

New techniques and themes for the young Picasso
In Paris the young Picasso saw the art of Vincent van Gogh, Paul Gauguin and Henri de Toulouse-Lautrec for the first time. Initially, he experimented with new painting and graphic techniques and explored Paris themes, such as Montmartre’s nightlife, in scenes of cafes and women dancing. Later, his interest shifted to more serious and melancholy subjects, such as the circus, people in need and mothers and children.

From his first Paris impressions to his breakthrough as an innovative artist.

While Picasso drew inspiration from many artists, he was never a mere imitator. He ingeniously adapted the discoveries made by his contemporaries and predecessors to create a style of his own. His development into a pioneering avant-garde artist is divided into four periods in this exhibition:

1. Picasso discovers Paris – A new world opened up for the 19-year-old Picasso when he became exposed to the work of Toulouse-Lautrec, Steinlen, Cézanne, Gauguin and Van Gogh. He experimented with new colours and techniques and painted subjects from modern Paris and Montmartre’s nightlife, including the flamboyant dancers and lively cafes.

2. Picasso as a Symbolist – Responding to the work of Gauguin and other Symbolists, Picasso adapted his style and painted destitute people and mothers and their children in the Saint Lazare prison. Picasso’s friend Carles Casagemas took his own life in 1901, marking the beginning of Picasso’s Blue Period, during which he produced works emanating a melancholy, sad atmosphere.

3. The life of the bohemians - In 1904 Picasso took over the atelier of the Spanish sculptor Paco Durrio in the Bateau Lavoir, a building in the heart of Montmartre where several artists resided. Picasso’s subject matter and palette changed yet again. His interaction with writers and poets, including Max Jacob and Guillaume Apollinaire, stimulated his interest in the circus and itinerant circus performers.

4. An innovative, modern style - Picasso’s atelier was a meeting place for artists, writers, collectors and art dealers, all attracted to the personality of the young and dynamic Picasso. He was inspired by the sculptures of Auguste Rodin, Durrio and Gauguin, which fuelled the development of his revolutionary modern style that would forever change the course of 20th-century art.

Dance Nomade (Nomad) by Krisztina de Châtel inspired by Picasso
During the course of the exhibition, every Friday evening Krisztina de Châtel’s Dansgroep Amsterdam will perform Nomade (Nomad), a site-specific work paying homage to Picasso’s representations of the circus. The performance is free of charge for visitors of Picasso in Paris, 1900-1907, and takes place amid his works in the exhibition gallery every Friday evening at 18.30 and 20.45.

Sunday lectures on Picasso
Picasso is also the theme of the Sunday lectures held on the first Sunday of the month. They are free of charge to visitors of the Van Gogh Museum, and take place at 14.00.
On 20 February, guest curator Marilyn McCully traces the young Picasso’s development into a pioneering artist (in English).
On Sunday 6 March, literature historian Peter Read explores the artistic exchange between Picasso and the poets in his circle of friends (in English). On 3 April, head of exhibitions Edwin Becker talks about Picasso en de wereld van het circus (Picasso and the world of the circus) (in Dutch). And on Sunday 1 May, curator Nienke Bakker lectures on Het Montmartre van de kunstenaars: Cafés, cabaret en theater (The Montmartre of the artists: cafes, cabaret and the theatre) (in Dutch).

For additional information, please contact the Department of PR & Publicity of the Van Gogh Museum: T + 31 (0)20 570 52 92 or e-mail pressoffice@vangoghmuseum.nl.