In her solo show, Suzanne Lafont presents her 'Situation Comedy' project, started from a work of art by General Idea 'Manipulating the Self Pamphlet' (1971). For her exhibition, Suchan Kinoshita uses elements of previous installations combined with found objects or objects specially made for this occasion. The works brought together in the show 'Out-of-Sync' offer us an experience of the elusive nature of time. 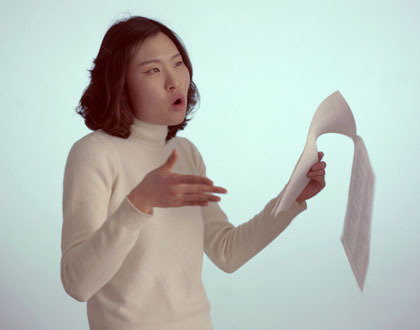 Suzanne Lafont’s room-size grid of coloured panels entitled Situation Comedy takes as its starting point Manipulating the Self: A Borderline Case, a small black-and-white booklet published in 1971 by the Toronto-based art trio General Idea. For Manipulating the Self, the artists issued a call for photographs whereby respondents were asked to follow these precise instructions: “The hand is a mirror for the mind - wrap your arm over your head, lodging your elbow behind and grabbing your chin with your hand.”

The mailer promised that in this contorted position the sitter would become “object and subject, viewed and voyeur”. The booklet features 115 “image situations” of the prescribed gesture, 99 of which are identified by the name or initials of the performers. In 1973, the mailer and booklet gave rise to a poster, whose publisher suggested changing the title to Manipulating the Scene - a modification welcomed by General Idea.

In Situation Comedy, Lafont reconsiders this passage from the self’s to the scene’s manipulation by performing a series of displacements. One such displacement hinges on the tension between the specular and the spectacular. Whereas General Idea’s project played on the mirror relation between hand and mind, Situation Comedy brings Manipulating the Self on the scene, as it were, into the realm of the spectacular - but a spectacular in which the self plays merely a supporting role. The 99 colour panels in Lafont’s installation refer to the 99 named images in Manipulating the Self. Of the 99 panels, 23 present the original poses re-performed by a group of art students with whom Lafont worked, and 76 panels are left blank, as figure-less monochromatic backdrops bearing the phrase “(not performed)”. These gaps render the original photographs’ mimetic function inoperative, by disabling the symmetrical relations between “object and subject, viewed and voyeur”.

As if to emphasise the role of the spectacle in General Idea’s booklet, Situation Comedy translates the entire publication into the strictest expression of visual language: a colour gradient, from purple to green through red, blue and yellow. Situation Comedy’s spectacular effect is further achieved by displacing the formal characteristics of General Idea’s project (black-and-white images, random mode of address through the mail, combination of image and text) with references to the visual cues of the entertainment industry: instead of the home-made æsthetic of the self-portraits in Manipulating the Self, Lafont’s panels display slick surfaces and blemish-less bodies reminiscent of TV presenters, the garish colour schemes of game shows, and the controlled environment of a studio. But, through another displacement, Lafont undermines the prominence granted the spectacle, by focusing on the power of language - and, particularly, of names - to re-activate the void left by the absent figures. Indeed, each panels includes, besides the page number corresponding to General Idea’s publication, the names of the student and of the original performer whom she or he enacts. The fact that even the figure-less panels of Situation Comedy bear the names of the two sets of actors signals the critical role played by the name in Lafont’s installation.

For Lafont, having a name is like wearing, or switching, clothes: everything depends on the situation and the desired effect. The performative action in Situation Comedy occurs precisely at the disjuncture between scenic conventions - whether of television or performance - and a linguistic system of reference. It is when a scene is not performed that the name can come to the fore as performative vector. The comedy of Situation Comedy would thus be of a secondary, indirect nature. The actors’ names and figures (from 1971 and 2009) play off each other, whether they are represented physically or not. Here we enter squarely into the realm of the ludic: just as with the theatrical prop or the deck of cards, the images of Situation Comedy remain in limbo, ready at any moment to be re-shuffled, or brought back on stage, when the situation arises.

Nothing is ever fixed in Suchan Kinoshita’s practice. Her protean work constantly develops and transforms itself through accumulated experiments. The artist considers each exhibition as a fragment of a whole of which she controls neither the limits nor the outcome.

Although linked together by the will and desires of the artist, her pieces are rich in unexpected connotations and can be seen differently according to the specific context and the passage of time, rather like a message transmitted by Chinese whispers that ends up retaining only a vague echo of its original meaning, but without being completely devoid of it.

For her exhibition at Mudam, Suchan Kinoshita uses elements of previous installations combined with found objects or objects specially made for this occasion. The space at her disposition becomes a place of passage and encounters where each of us is invited to interpret our own sensations and to think about the propositions on offer by relying on personal references. The artist herself inscribes her work within an open temporality: Stick Empathy is part of a journey initiated almost twenty years ago and we witness its current progress, as it happens.

Suchan Kinoshita was born in 1960 in Japan. She lives and works in Maastricht.
She first studied at the Musikhochschule in Cologne and went on to the Jan van Eyck Academie in Maastricht. She began to work for the theatre, as an actress, director and as a decorator. This experience, as well as her musical background, are perceptible in her interdisciplinary installations which are regularly displayed on an international level since the end of the 1980s, in contexts such as the 4th Biennale of Istanbul (1995), the 11th Biennale of Sydney (1998), Skulptur Projekte Münster (2007) and the 7th Biennale of Shanghai (2008).

Significant monographic exhibitions were presented, for example, at the White Cube, London, at the Museum of Modern Art City of Paris / ARC, at the M HKA, Antwerp and at the Ludwig Museum, Cologne.

Suchan Kinoshita was the winner of the 1992 Prix de Rome. In 2010 the Ludwig Museum in Cologne and Kinoshita received the “Kunstpreis des Kuratoriums der Kunststoff-Industrie” (Fine Arts Prize of the Board of Trustees of the Plastics Industry). This prize made the solo exhibition In 10 Minuten possible.
Nothing is ever fixed in Suchan Kinoshita’s practice. Her protean work constantly develops and transforms itself through accumulated experiments. The artist considers each exhibition as a fragment of a whole of which she controls neither the limits nor the outcome.

Out-of-Sync
The paradoxes of time

The Out-of-Sync exhibition broaches the sweeping issue of the place taken up by the dimension of time in the visual arts from a specific angle: it is concerned with works in which several temporalities coexist, overlap, contradict one another, thus developing a paradoxical relationship to time. Through this interest in what the philosopher Elie During, in his recent book Faux Raccords, calls “times out-of-tune” [“les temps désaccordés”], the works brought together in the show are not meant to illustrate or define the notion of time. On the contrary, they offer us an experience of its elusive nature.

The time-related figures of non-synchrony, disjunction and delay play a significant part in works produced in the late 1960s and early 1970s. Their development went hand-in-hand with the rise of the moving image in the visual arts, marked by the emergence of video and the growing use of film by artists, together with the busy dialogue struck up between the various art disciplines, focusing in particular on questions of time and process. The Out-of-Sync exhibition brings together a series of key works from that period, linked, dialogue-like, with more recent works illustrating the topicality of this question in contemporary artistic practices.

The matter of recording is central to the show. By way of straightforward techniques, the works on view in Out-of-Sync highlight the way the recording of time and its recreation may give rise to unconventional temporal forms. The installation Present Continuous Past(s) (1974) by Dan Graham is emblematic of this approach: using a video system which retransmits a picture of the exhibition area with a lapse of a few seconds, it offers us a perception of an “extended present time”. A similar time-frame is conjured up by Laurent Montaron’s Melancholia (2005): taking the form of a Space-Echo - a musical analogue device designed to produce echo and reverberation effects - displayed like a bas-relief in a pierced niche at the base of a wall, the work presents our eye with the ever-changing loops produced by its magnetic tape.

Another important aspect of the exhibition, underscored by the title Out-of-Sync - indicating a discrepancy or lapse between sound and image -, is the place taken up in it by the sonic and musical fields. Bruce Nauman and Dan Graham have regularly compared the dimension of time in their early works with the musical output of composers like Steve Reich, whose “phasing” technique, based on the superposition of several identical lines of sound played at slightly differing speeds, foreshadows the use of a time delay in pieces like Bruce Nauman’s Lip Sync (1969). This interest in complex forms of time possibly suggested by the musical fields occurs, in particular, in the activities of Manon de Boer, several of whose films take as their point of departure musical works such as John Cage’s 4’33” and Béla Bartók’s Sonata for Solo Violin Sz. 117, as well as in works by Anri Sala, whose video diptych After Three Minutes (2007) plays with the clash between the beat of a cymbal lit by a stroboscopic light and the frequencies peculiar to video recording.