Patria o Libertad! is an exhibition with a critical perspective about an important challenge of our time: the general rise of patriotism and nationalism. The exhibition includes video, performances and project by Adel Abidin, Santiago Sierra, Carlos Motta, Democracia and more. 'Cobra ceramics from the collection' includes 13 painted plates and dishes by Karel Appel, Corneille, Constant, Asger Jorn, Anton Rooskens, Pierre Alechinksy and Lucebert. The collection also displays work on permanent loan from a private collector, notably a set by Karel Appel, with cups, dishes, a teapot and a vase. 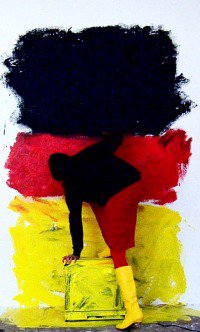 ¡Patria o Libertad! is an exhibition with a critical perspective about an important challenge of our time: the general rise of patriotism and nationalism. Patriotism takes different forms, some of which are benign and comforting, while others are disturbing in their intolerance. In a time in which the combination of immigration, globalization and economic recession is generating problems worldwide, it is important to take a critical look at the concepts of patriotism and nationalism. The way we engage with nationalism and patriotism is one of the greatest challenges of our time. In the international group exhibition, ¡Patria o Libertad!, contemporary artists use video works to investigate different forms of patriotism.

Spanish artist collective DEMOCRACIA formed by Iván López (1970, Madrid) and Pablo España (1970, Madrid) engage in artistic practices centred on socio-political ideas. Sport is par excellence a perfect medium to channel a nation's sense of community, and for this project DEMOCRACIA cooperated with the Ultramarines, hooligans of the French soccer team Girondins from Bordeaux. A series of political and philosophical statements were introduced on banners, flags, posters and other paraphernalia in the stadium during the match against Stade Rennes on September 27, 2009. Ne vous laissez pas consoler, 2009, video projection, 17:04

Included in the exhibition:

Cobra ceramics from the collection

For the first time in its history the Cobra Museum shows Cobra ceramics from its collection, in an intimate presentation in the prints gallery. Over the last 15 years, in addition to paintings, drawings, graphical work and sculptures, the Cobra Museum has also collected ceramics by Cobra artists. This part of the collection now includes 13 painted plates and dishes by Karel Appel, Corneille, Constant, Asger Jorn, Anton Rooskens, Pierre Alechinksy and Lucebert. Also photo’s by Henny Riemens will be on display. Photographs made in 1954, in Albisola (Italy), where some Cobra artists took part at the experimental ‘ceramics conference’.

The collection also includes work on permanent loan from a private collector, notably a set (9 pieces) by Karel Appel, with cups, dishes, a teapot and a vase. Despite the fact that the pieces have been well used, they are still in perfect condition.

Most of the Cobra artists worked with ceramics. It was an attractive craft for them because it allowed for experimentation in form and clay. Since the founding of Cobra in November of 1948, the artists saw themselves as working people, whose working terrain covered the entire cultural patrimony of mankind. All cultural expressions, including painting, poetry, sculpture and ceramics, were part of their visual vocabulary. Most of the Cobra artists – including Karel Appel, Pierre Alechinsky, Constant, Corneille, Asger Jorn, Lucebert, Carl-Henning Pedersen, Reinhoud, Anton Rooskens and Vandercam – worked in ceramics. The experimentation that was possible in clay, with three-dimensional form as well as painting, was very attractive to these artists.

In 1947, Anton Rooskens was invited by George Goossens, owner of the Russel Tegula earthenware factory near Venlo, the Netherlands, to experiment at the factory.
A year later, Rooskens joined the ‘Experimental Group in Holland’ (which would soon become part of the international Cobra movement), and passed on the opportunity to work with ceramics to Appel, Corneille and Constant. The experimental artists brought innovations to the factory's earthenware production by painting the objects they manufactured with fantastic figures.

Karel Appel's fantasy creatures almost seem too big for the earthenware surfaces they adorn, as if they were escaping out of the clay. Corneille’s figures embrace more balanced elements, rather than individual figures, and Constant, the theorist amongst the Cobra artists, revealed his naïve predilections in ceramics more than ever.

The Danish Cobra artist, Asger Jorn, had already worked with ceramics as a student in the 1930s. In 1953, the Italian artist, Enrico Bay, told Jorn about the rich pottery tradition in the small village of Albisola, near Genoa, Italy. Jorn travelled to Albisola and invited Appel and Corneille to join him. Their stay in Albisola gave new impulse to their ceramics work, which in Jorn's case resulted in large-scale ceramic wall objects. Photographer Henny Riemens, who in 1954 was married to Corneille, created a unique photographic report of their work in Albisola. After Albisola, the Cobra artists continued to investigate the ceramics medium, and produced several large-scale wall objects in ceramics.