An exhibition of new photographs. The title of the exhibition, La "O" refers to the absent vowel on a blackboard in one of the abandoned schools. Since 1995, Echavarria's disturbingly beautiful photographs and videos address the dread and human waste of the endless drug wars in Colombia. The letters "a, e, i, u" are written in faint but still legible paint. The missing "O" resonates in the silence of the deserted place. 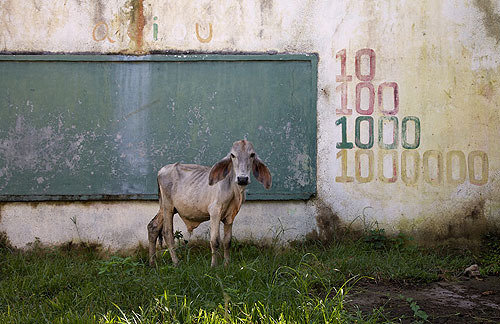 Josée Bienvenu Gallery is pleased to present La "O" an exhibition of new photographs by Juan Manuel Echavarría. Since 1995, Echavarría's disturbingly beautiful photographs and videos address the dread and human waste of the endless drug wars in Colombia. Each successively brutal cycle since the 1950s has devolved the country toward a national psychosis of violence, a state of mind where mass murder, forced displacements and fear have become the fabric of daily life.

Juan Manuel Echavarría's work gives a voice to the voiceless, the thousands of farmers that have been massacred and displaced from their homes. Over the past year, he has embarked on multiple journeys through the rural region of Montes de Maria (Bolivar, Colombia), ravaged by the war between the guerilla and the paramilitaries sometimes in collaboration with the Colombian army. Over the course of long expeditions through inaccessible and muddy roads in the remote mountains, Echavarría has encountered many villages left abandoned by the war.

The title of the exhibition, La "O" refers to the absent vowel on a blackboard in one of the abandoned schools. The letters "a, e, i, u" are written in faint but still legible paint. The missing "O" resonates in the silence of the deserted place. Silencio de Bellavista Ocre y Silencio de Bellavista Verde are photographs of blank and derelict blackboards all carrying their singularity in the various degrees of the peeling paint, while Lo Bonito es Estar Vivo (It's Beautiful to be Alive) is the image of a blackboard with this actual inscription, written perhaps after the entire population of the village of Mampuján was displaced by the paramilitaries ten years ago although miraculously no one was murdered.

Some of the works are titled after fragments of conversations with forcefully displaced people: Nos Vinimos el Tronco (We Brought the Trunk); Se Quedaron Las Raices (The Roots Stayed); Desenterrar y Hablar (Unburying and Speaking). On March 11, 2010, the people from Mampuján decided to come back for a day to their abandoned village to commemorate the day of their forced displacement. Juan Manuel Echavarría photographed the objects, a vase of flowers, a tapestry, placed by the villagers in the ruins of their former homes for the occasion.

El Testigo (The Witness), 2010, references an earlier image, El Testigo, 1998, of a ghostly white horse standing in a vast and empty landscape. Here, in El Testigo, the "witness" is a young calf in the middle of a classroom, staring at the camera with bewildered eyes. Emaciated, though the grass is green in the classroom converted into a field, the calf speaks for the absent children. Through his own fragility, the calf is a witness of the forced displacement of the population, of the children trapped in the war.

Born in Medellín, Colombia, Juan Manuel Echavarría lives and works in New York and Bogotá. His work has been exhibited extensively through Latin America, Europe and the United States. This is his third solo show at Josée Bienvenu Gallery. Exhibitions include: